Our first game in the Year of the Rabbit lacked something of the ‘bang’ from the weekend’s firecrackers as China heralded the Lunar New Year. For long periods, the play here was cautious. Both teams are in the thick of a race for a playoff place: the Dragons have ground to make up on the top eight, while Vityaz is far from secure in its position as a prospective playoff team.

Kunlun had good grounds for optimism. A couple of weeks ago, the Dragons enjoyed a 4-0 win over the same opposition. That ended a run of three Vityaz successes in head-to-head fixtures this season. Moreover, we got a good confidence boost on Friday, defeating Sochi 5-1. Coincidentally, Vityaz played its previous game against the same opposition and had to dig deep to edge a 3-2 verdict.

Matt Jurusik, who had the shut-out in that 4-0 triumph, returned in place of Jeremy Smith for this one. That was Greg Ireland’s only change from the team that sank Sochi and, in doing so, ended Sergei Svetlov’s tenure as head coach of the Leopards.

With much at stake for both teams, the first period was cautious. However, Red Star conjured up some genuine chances. Parker Foo got a good look at Maxim Dorozhko in the Vityaz net, and late in the frame Colin Campbell received a great feed from young German Tochilkin. However, right in front of goal, the puck got tangled in Campbell’s skates and skipped past Dorozhko’s post.

That was probably the clearest opportunity of the first period, and the second continued in similar vein. Both teams defended strongly, while the coaches on both benches were exhorting their forwards to greater effort and precision. 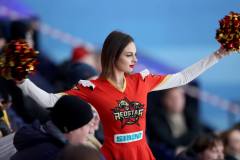 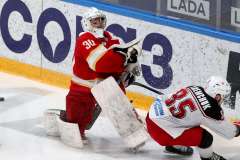 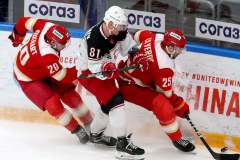 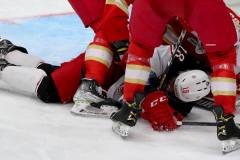 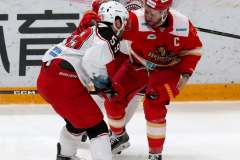 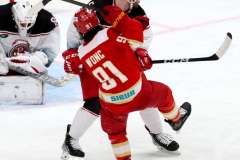 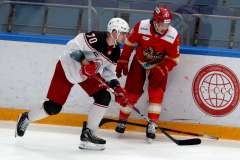 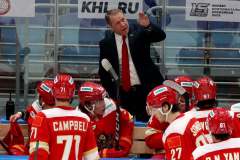 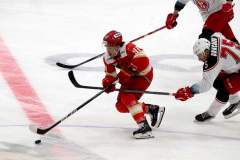 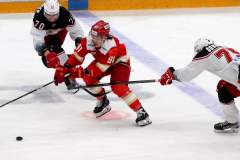 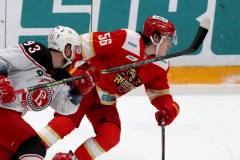 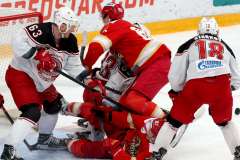 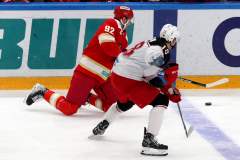 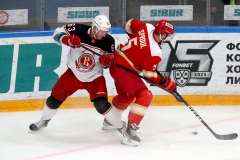 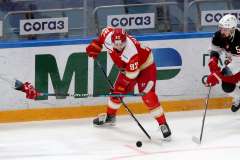 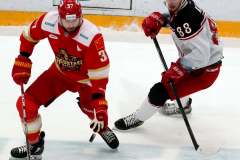 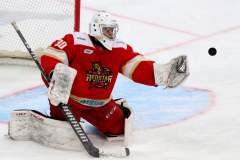 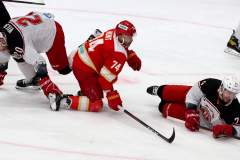 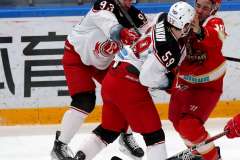 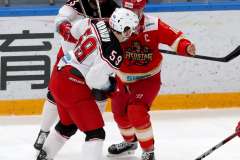 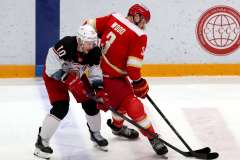 Late in the middle frame, Vityaz found the breakthrough. While China was celebrating the New Year yesterday, Ivan Zinchenko marked his 21st birthday. And the Vityaz forward carried on with the party when he collected Nikita Goncharov’s pass and beat Jurusik at the second attempt.

Red Star’s hopes of a rally in the third period were hamstrung by penalties. First Parker Foo’s high stick brought him a double minor. When that was safely killed off, Brandon Yip was handed a 5+game after a check to Goncharov’s head. As a result, the Dragons played nine of the first 10 minutes of the final frame with four skaters. True, Vityaz also took a minor penalty alongside Yip, and two minutes of four-on-four play might have brought a tying goal on a three-on-one rush. However, Luke Lockhart’s misplaced pass at the crucial moment handed Vityaz a reprieve.

It’s worth noting the strength of the KRS penalty kill. Once again, our guys ate up the minutes and Vityaz went 0-for-5 with a man advantage today. Considering those penalties included a major and a double minor, that highlights the effectiveness of our defense even under pressure. Factor in Sochi’s 0-for-7 on the PP on Friday, and we can see that this is one aspect of our game in which we can take genuine pride. Unfortunately, our power play could not reach the same standard. One more late chance with an extra man yielded nothing in the closing stages and ultimately our guys came up narrowly short.

Next up we have a run of three games against playoff chasing rivals. Our five-game home stand continues with visits from Dinamo Minsk (ninth) and Spartak Moscow (seventh). Then we go on the road to Minsk in our final game of the month.