Tomorrow sees the start of the Lunar New Year festivities across China. Today saw the start of renewed celebrations of the Day of the Dragons, as KRS powered to an emphatic victory over Sochi.

It’s the fourth time we’ve beaten the Leopards this season, and the 5-1 verdict is the most emphatic to date. And there could be more to come: we face this opponent twice more in the closing stages of the season. At a time when every victory counts in the race for the playoffs, those are potentially two big games for us next month.

The first period was one of our best of the season. Red Star had three unanswered goals, and could have added even more.

We started off with a fifth-minute opener created by a beautiful no-look assist from Zhang Zesen. He set up Devin Brosseau with a lovely instinctive feed, collecting his second point in the KHL. The New Year period is a time for magic in China, and Zhang produced a little piece of his own sorcery on this play.

Goals arrived at five-minute intervals: German Tochilkin doubled the lead when he steered a Tyler Wong feed home from close range. Then Zac Leslie thumped in a point shot that took a deflection on its way through to goal. It wasn’t immediately clear whether Parker Foo or Cliff Pu got the vital touch as KRS converted its first power play of the game. However, the official protocol awarded the marker to Foo, continuing his happy habit of scoring on Sochi. 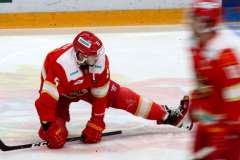 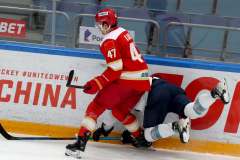 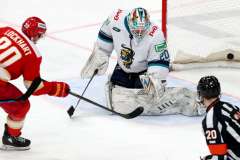 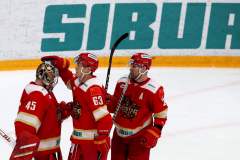 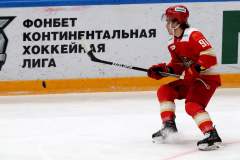 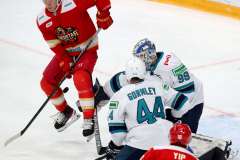 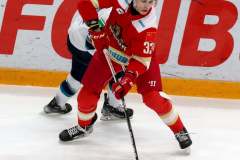 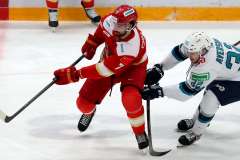 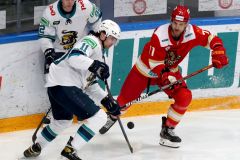 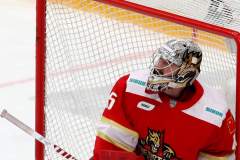 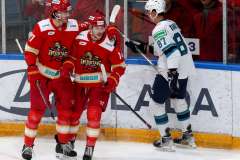 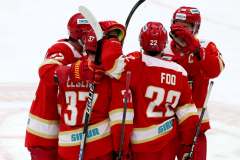 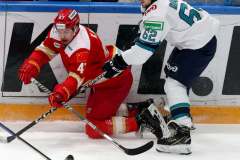 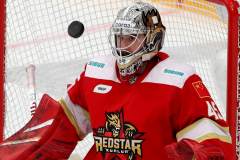 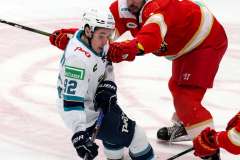 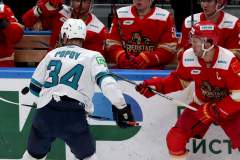 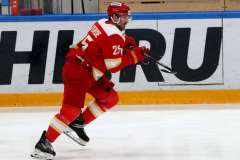 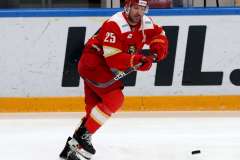 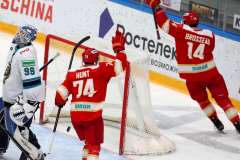 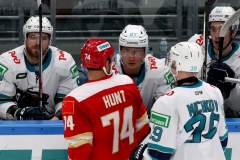 There might have been more goals. Killing a penalty for the first time, Luke Lockhart led a breakaway but was fouled by Artyom Nikolayev. Luke took the penalty shot himself, but could not solve Maxim Tretyak in the Sochi net. The goalie was new to the game after replacing Mikhail Berdin in the 15th minute; Lockhart watched, learned, and waited for his next chance.

Meanwhile, Tretyak kept his goal intact for some time. The middle frame came and went with no further scoring. Jeremy Smith, who enjoyed a relatively quiet opening frame, stepped up with some big stops to deny Sochi a way back into the game. In doing so, he calmly ushered out opponent to the end of its season: tonight’s defeat means there is no mathematical chance of the Leopards making the playoffs (admittedly, that chance was only theoretical ahead of today’s action).

Midway through the third, Foo removed any doubt about the outcome when he got to the backdoor to steer home a Tomas Jurco feed. That brought second assists of the game for Jurco and Leslie, while Foo’s second goal of the evening makes him our leading Leopard hunter this season with six tallies in four games against Sochi.

The only disappointment on a great night came when Dmitry Utkin stuffed the puck past Smitty from close range, robbing our goalie of a shut-out. However, that was not the final word. We saw some angry scenes as Brosseau took a spearing major after a clash with Sergei Popov – the same Sochi forward whose five-game productive streak was coming to an end. However, you remember Lockhart’s earlier shorthanded breakaway and subsequent penalty shot miss? He certainly did, and Luke showed that he had learned from the experience when he engineered a similar opportunity here. This time, our record appearance man got clear of two defensemen and found the answer to Tretyak, wrapping up an emphatic win.

Our first game in the Year of the Rabbit is on Sunday when Vityaz is the visitor. Victory there could put us just eight points behind Dinamo Minsk and Spartak, the teams in seventh and eighth. Moreover, our three games next week are all against those immediate rivals for a playoff spot.