Kunlun suffered from the ‘ex’ factor on Tuesday. Goaltender Dmitry Shikin returned with his Vityaz team to produce a game-winning performance against his former colleagues. In addition to a series of big saves, Shikin also picked up an assist on the opening goal on a frustrating night for Red Star.

Tuesday’s big news came before the puck was dropped. Parker Foo learned that he would join Brandon Yip on Team Tarasov at the weekend’s All-Star Game. Foozy got the call after injury ruled out Dynamo Moscow’s Eric O’Dell, and it’s a deserved reward for another strong season from the Chinese international.

It also means that, for the first time, the Dragons will have two representatives at the KHL’s major showcase. Parker is set to make his All-Star debut in Chelyabinsk alongside our captain after compiling 18 (8+10) points in 35 games this season. He’s also likely to be well rested for the occasion: today he sat out his second game in a row, having also missed our battle against SKA two days earlier.

Greg Ireland welcomed back Cliff Pu – who moved onto the second line – and defenseman Vince LoVerde tonight. Alex Riche and Ruinan Yan made way. We also renewed acquaintance with our former goalie Dmitry Shikin – and his return to his former club proved to be the decisive performance of the game. 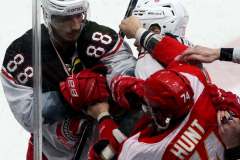 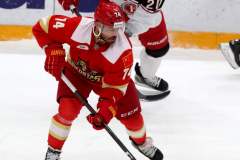 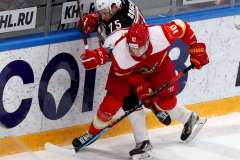 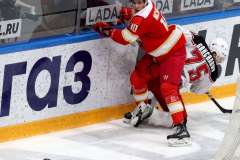 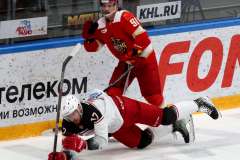 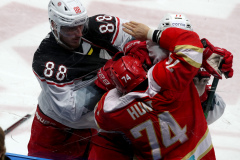 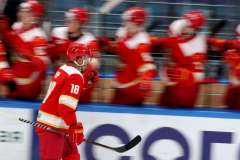 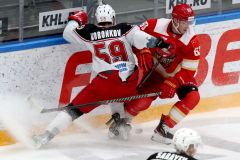 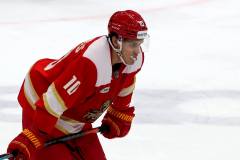 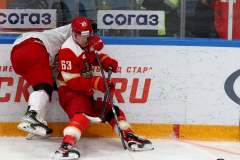 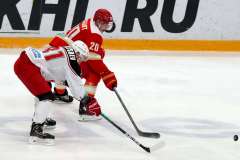 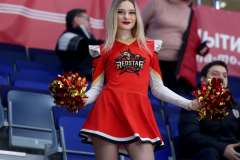 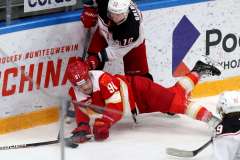 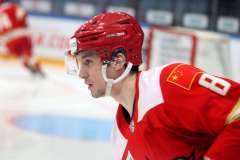 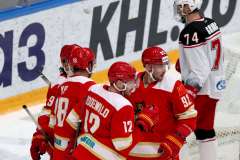 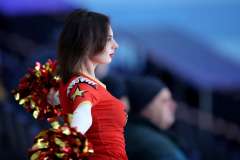 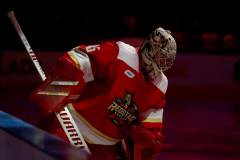 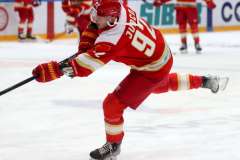 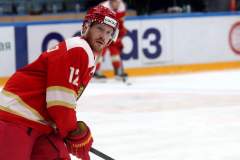 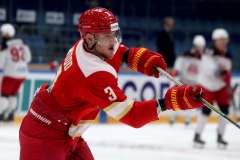 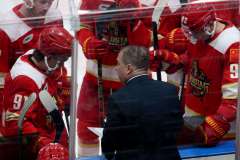 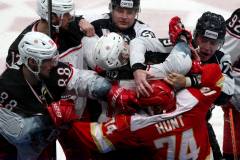 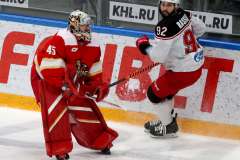 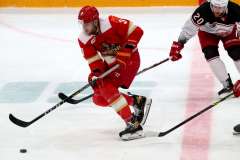 The Dragons made a lively start to the game, pushing back Vityaz and strongly outshooting the opposition. However, Shikin was in fine form to keep the scoresheet blank. And worse was to come at the other end when a counterattack saw Kirill Rasskazov open the scoring for Vityaz. Among the assists? None other than Shikin. Before the end of the first period, Roman Abrosimov doubled the visitor’s lead and then our problems continued when Vityaz got a 5-on-3 power play. The Dragons’ PK was flawless, however, and kept the scoreline at 0-2.

In the second period, Red Star got a chance to get back into the game when Vladislav Kara took a major penalty for boarding after a crunching foul on Luke Lockhart. It will be no surprise to learn that Garet Hunt was quick to make the peace in his inimitable style. Once he returned from his roughing penalty, KRS converted the power play when Yip scored on the rebound following Zac Leslie’s shot. Back to a one-goal deficit, and with half the game to play there was every chance of saving the game.

However, Shikin had other ideas. Our former netminder would go on to make 35 saves in the game, frustrating our offense time and time again. At the other end, the sucker punch arrived in the dying moments when Kara – earlier the aggressor in that incident with Lockhart – potted an empty-net goal to clinch the win.

Defeat leaves the Dragons in 10th place, but enables eighth-placed Vityaz to open a 12-point gap to the playoff spots. The next chance to close that gap comes on Thursday in Yaroslavl, the Dragons’ final game before the All-Star break.