A game that started brightly for KRS ended in a heavy defeat at home to Eastern Conference high-flyer Metallurg. The Dragons had the better of the first period and took a deserved lead into the intermission before the visitor’s impressive finishing turned things around after the break.

Tuesday’s game also formed part of the club’s ‘Dragon Fight Cancer’ campaign. As the name suggests, this is about raising funds and awareness for the battle to support people with serious illness and help develop better treatments. Our players got behind the campaign, appearing in photos with ‘I fight for …’ banners to commemorate their own family and friends affected by cancer. The guys also took to the ice wearing stickers on their helmets to promote the cause.

Given the occasion, it was fitting that Alexei Murygin was our starting goalie. His inspiring story proves to us all that there is life after a cancer diagnosis: in his case, Murygin not only beat the disease but returned to play top level sport.

Alexei’s return to the starting line-up wasn’t the only change from the team that beat Sochi 5-2 last time out. Josh Nicholls and Guo Jianing replaced Parker Foo and Yan Ruinan.

In the first period, the Dragons played some great hockey. After six minutes, Tyler Wong opened the scoring with a fine goal. He collected the puck to the right of Vasily Koshechkin’s net and spun in and out of the trapezoid to get away from Yegor Yakovlev. After forging a path to the slot, Wonger went on to beat Koshechkin at the second attempt. It was a fine piece of skill against two of the most experienced and decorated players in the KHL. 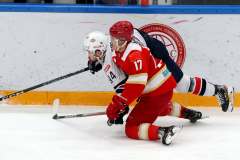 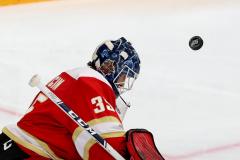 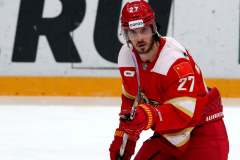 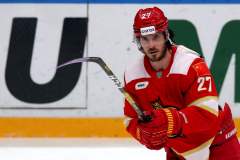 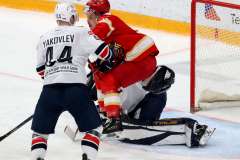 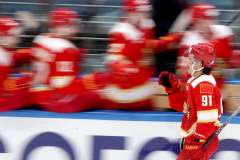 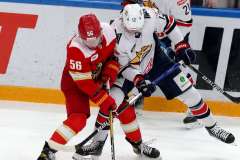 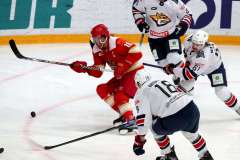 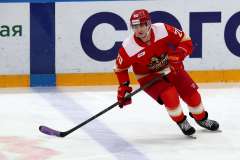 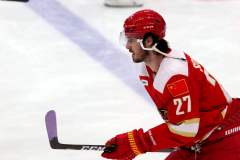 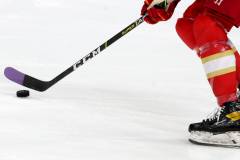 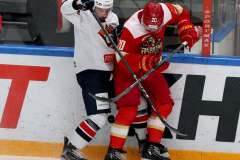 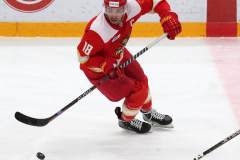 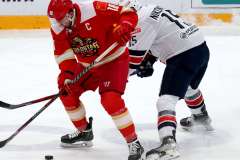 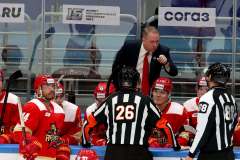 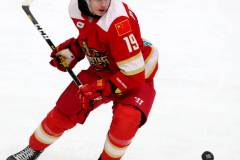 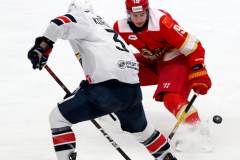 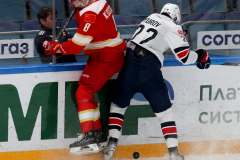 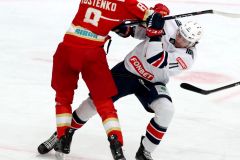 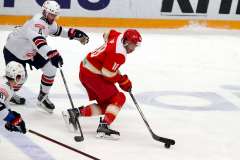 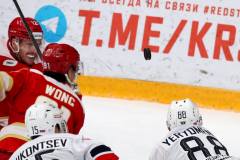 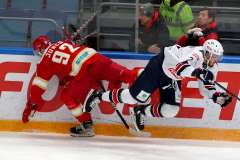 That was the highlight of an opening frame where the only criticism might be that Red Star should have opened a bigger lead. The home team outshot Metallurg 17-8 and there was a good chance for Alex Perevalov and an odd-man rush involving Zac Leslie and Alex Riche.

However, late in the first, a penalty on Riche changed the course of the game. Metallurg began the second period on the power play and took the initiative from then on. It’s more than likely there were some harsh words spoken in the visitor’s locker room as well, and the result was a fast start from Ilya Vorobyov’s team. Kunlun killed that penalty, but almost immediately afterwards Yegor Korobkin tied the game.

Then, as the middle frame drew to a close, Metallurg assumed control. Josh Currie put the visitor ahead on a delayed penalty. Danila Yurov made it 3-1, cashing in on a defensive lapse. Then the Steelmen got a 5-on-3 power play and Nikita Korostelyov took the game away from our guys.

The Dragons needed a fast start to the third, and a penalty on Yurov offered hope of a power play goal. However, the best chance fell to Luke Lockhart, who was quickly closed down by the visiting PK.

Late in the game, Alexei Maklyukov added a fifth goal for Metallurg. That prompted both teams to swap goalies and give some minutes to young players. Ilya Nabokov replaced Koshechkin, while Sun Zehao took over from Murygin. Unfortunately, the final word went to the visitor. Vladislav Yeryomenko added a sixth, with a hint of offside about it. A bench challenge from Greg Ireland went against us, leaving Red Star shorthanded for the closing moments. It was a sequence that rather summed up a difficult evening.