Captain China added a new distinction to his already impressive CV. His hat-trick in today’s game saw him set a new club record scoring streak of nine games. In that time, Yipper has 11 (7+4) points for a season tally of 25 (11+14). At this rate, we could see more KRS scoring records tumble before the season is done.

More satisfying than an individual record, though, our captain’s performance crowned a battling victory. Twice, the Dragons roared back to wipe out two-goal deficits. Then a five-star display in the third period blew Neftekhimik away and ended a run of four straight losses on home ice.

Admittedly, things did not exactly start well. An early error gifted the opening goal to Ansel Galimov, and KRS spent much of the first period on the PK. There were three separate occasions when the guys were reduced to three skaters, and Anthony Camara converted one of them into a second goal.

Given the amount of time spent on the defensive in the first period – 14 blocked shots in 20 minutes tells its own story – it was something of a relief to be down by just two goals at the intermission. Then came the first fightback.

It started – how else? – with a goal from Brandon Yip. Brett Pollock forced a turnover in center ice, Jack Rodewald took the puck into the Neftekhimik zone and his feed set up Yipper to get us on the board. Within a minute, it was 2-2. Zac Leslie got to the slot and his shot was too hot for Andrei Tikhomirov to handle. The rebound dropped for Cliff Pu and the scores were level. 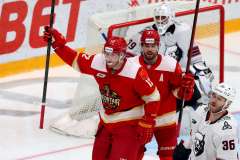 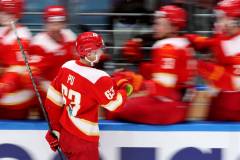 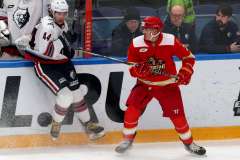 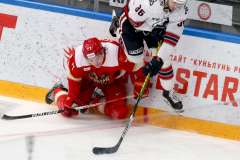 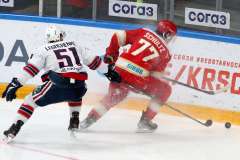 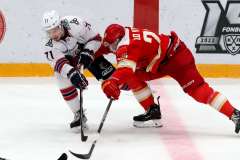 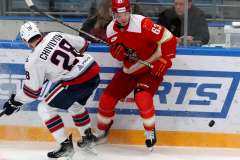 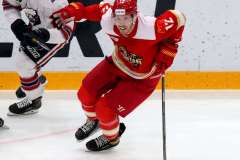 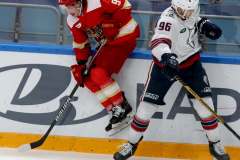 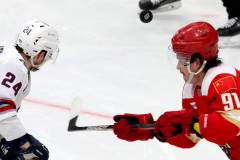 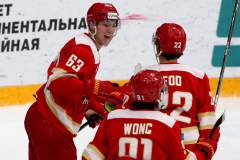 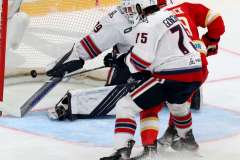 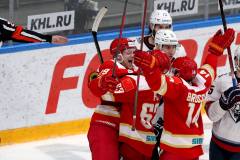 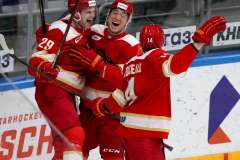 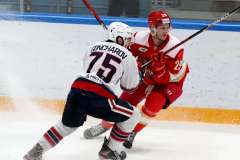 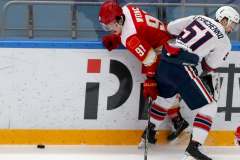 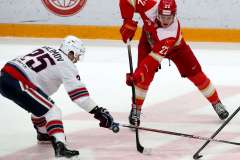 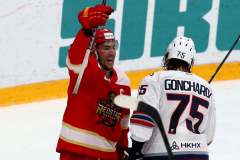 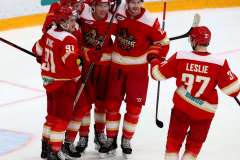 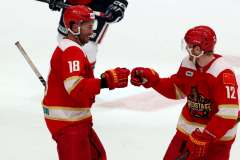 However, that was only the first fightback. Neftekhimik responded with two more goals before the second intermission, as Maxim Goncharov and Andrei Chivilyov made it 4-2.

Red Star needed a good start to the third, and got it thanks to Rodewald’s eighth goal of the season. Tyler Wong’s deflected feed dropped nicely for him to fire home from close range and bring the game back to life. Rattled, Neftekhimik took only its second penalty of the game and Pollock deceived everyone, including the cameraman, as he glided into the danger zone in reverse before spinning to shoot the puck past Tikhomirov.

Suddenly, this was anyone’s game. Red Star, though, had the momentum. Another Neftekhimik penalty brought another PP goal, and this time it was Yip on hand to grab the game-winner. It took just 16 seconds to convert the power play: Rodewald back to the point, Leslie with the shot and Yip on the slot to redirect the puck into the net.

There was more to come. Yip completed his hat-trick with a short-handed goal into an empty net. The, with four seconds left to play, Ryan Sproul completed the win with his first goal since returning from injury.

Despite the win, Red Star remains 10th in the Western Conference with 25 points from 31 games. However, our guys are just four points adrift of the playoff places and will look to close that gap a bit more when Torpedo visits on Monday.