Today we saw a different side of Garet Hunt’s game. Our popular forward, whose robust style is making him a big hit with our fans and a big pain for our opponents, has previously been most prominent in the PIM column on the box scores. In Thursday’s game against SKA, though, Hunt got his first goal in KHL play – scoring on a team that is yet to lose this season.

The big moment came midway through the third period when, admittedly, the game was gone. Nonetheless, this team is built around a ‘zero quit’ mentality and even in adversity, our guys continued to seek ways to improve the situation.

Garet jumped into the action off the bench, found himself in on a broken play, and rifled home a one-timer from the deep slot to record our second of the night. Hunt’s strike also inspired a further score late in the third as young defenseman Dmitry Kostenko potted his first career goal. Kostenko, on loan to us from Spartak Moscow, initially released Jack Rodewald on a breakaway. When that didn’t come off, the 19-year-old joined the offense and fired home a powerful shot from long range to beat Maxim Sidorov in the visitor’s net. That made the score in the third period 2-1 in our favor, and produced a more respectable final score of 3-6. 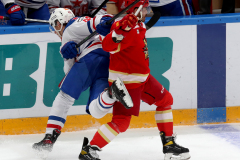 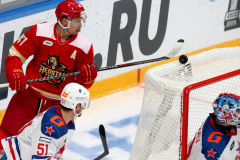 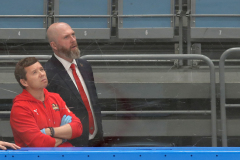 Thursday’s game pitted the Dragons against the unbeaten league leader. However, after disposing of the defending champion on Tuesday, confidence was understandably high. Matt Jurusik took over from Jeremy Smith in goal, but otherwise the line-up was unchanged as Red Star went in search of a third successive victory.

Unfortunately, after that disciplined, determined performance against CSKA, SKA proved too hot to handle. Things might have been different if Hunt had enjoyed better fortune with an early chance, but once a bad bounce in front of our net gifted Dmitrij Jaskin a power play goal in the third minute, the writing was on the wall.

A frustrating first period saw Tyler Wong get the puck in the net, but his tying goal was ruled out after a bench challenge brought an offside verdict against us. Soon after, another penalty led to another SKA goal, this time from Marat Khusnutdinov.

Early in the game, young defenseman Alexander Nikishin threw himself into some big hits against Hunt, perhaps laying down a marker. However, his enthusiasm for the fight cost him in the 16th minute when he leapt into a hit on Wong and ended up injuring our forward. A video review confirmed a major penalty, and Nikishin evening came to an early end; there could be little argument after seeing the footage.

The power play offered a way back into the game, and just before the first intermission, Red Star reduced the deficit thanks to a smart one-timer from Kyle Wood in the left-hand circle.

However, hopes of taking the game to SKA in the second period soon evaporated. The visitor scored three unanswered goals, with Valentin Zykov’s goal and two assists undoing our guys.

With the game out of reach, the third period was a question of pride. Given the evident gap in class and budget between SKA and ourselves, there was no shame in losing. However, there was every reason to make a fight of it and, after allowing a sixth goal from Nikita Komarov early in the final frame, that’s exactly what Kunlun did. The closing stages brought those two late goals, giving the scoreline a more respectable look and underlining the fact that this team will not simply fold, no matter what the game situation.