There was big news for the Dragons ahead of Friday’s home game against HC Sochi. Defenseman Ryan Sproul signed up for his fourth season on the team and went straight into Greg Ireland’s line-up. Sproul, also known as Ruian Sipulaoer, was part of China’s Olympic adventure last season and the 29-year-old had 60 points in his first three seasons with us.

Today Sproul was used as the seventh d-man, while Jack Rodewald returned after serving his two-game suspension. However, it may not come as a surprise to learn that our guys found an opportunity for another fight early in this game.

Regular Red Star watchers know what to expect from Garet Hunt. We can only conclude that Donat Stalnov hasn’t been paying attention. His foul on our peacemaker in the corner prompted two fights simultaneously when Ivan Lisin jumped in to remonstrate with Stalnov before Hunt came to blows with Nikita Zorkin. Any doubts about who was responsible were cleared up when the penalties were handed out, and Stalnov got two for roughing, five for the fight and 10 as the instigator. Lisin, Hunt and Zorkin got five each for fighting, with a bench minor for the Dragons for unsportsmanlike conduct.

When things settled down, the first period saw Jeremy Smith hard at work to keep a lively Leopards offense at bay. His performance got its reward at the other end when Red Star took the lead in the 13th minute. That opening goal owed much to Tyler Wong’s persistence. Tripped as he looked to bring play into Sochi’s zone, our forward recovered his footing and kept the move going with a feed to Kyle Wood. The defenseman went deep into enemy territory and after Alexei Melnichuk got behind the initial shot, Ethan Werek was on hand to stuff home the rebound. 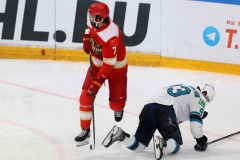 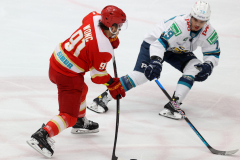 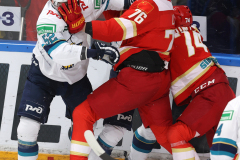 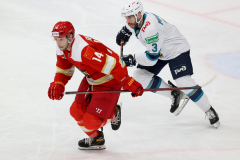 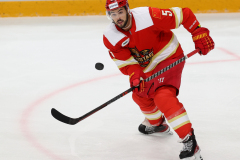 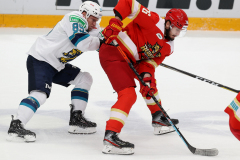 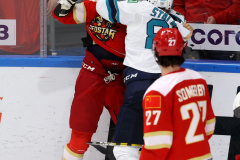 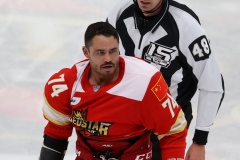 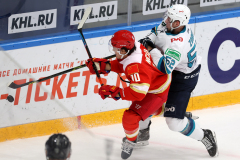 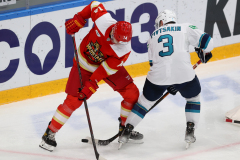 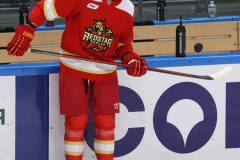 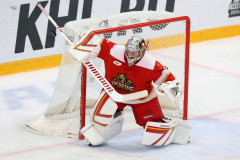 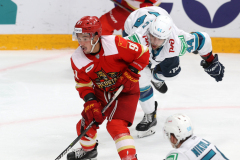 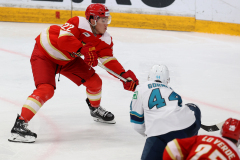 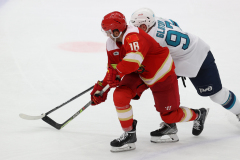 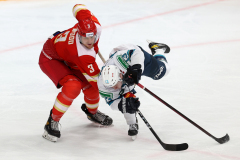 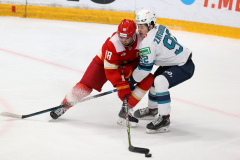 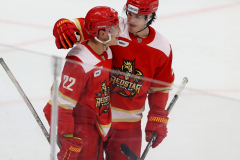 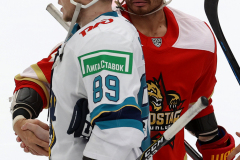 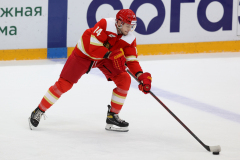 If the opening frame saw Kunlun rely on solid defense before nicking a goal on the counter, the second was almost the opposite. This time, our forwards were frustrated and late in the stanza Sochi tied it up thanks to Dmitry Zavgorodny.

Early in the third, the Dragons regained the lead. This time Parker Foo was the beneficiary of some great work by Luke Lockhart on the boards. Lockhart worked the puck away from Sochi’s experienced Nikita Pivtsakin and Foozy took over. Speeding through the face-off circle towards the net, our man wired a well-placed wrister that snuck inside Melnichuk’s near post to make it 2-1.

That wasn’t the end. Sochi continued to press in search of another tying goal, and penalties on both Hunt and Vincent LoVerde added to the challenge for the Dragons. In the end, though, the Leopards’ final surge went against them. It might have looked like Foo was merely attempting to clear his lines with 30 seconds left, but the puck cannoned off the boards and skipped off to the unguarded net to make it 3-1. And, just to sprinkle a little glitter on that play, Sproul claimed an assist to round off his return in style.