The award was decided by the coaches of the various teams in the WHL, who were invited to vote for the top players of the campaign. Alexandra was presented with her prize by Sergei Yakovlev, head of the league’s development department.

Last season, Carpenter was the top scorer in the championship. She played 27 games for the Rays in regular season, compiling 53 (21+32) points. She also led the way in the playoffs, with 7 (3+4) points from five games. All that helped the Chinese franchise to win the cup in its first season in the WHL. 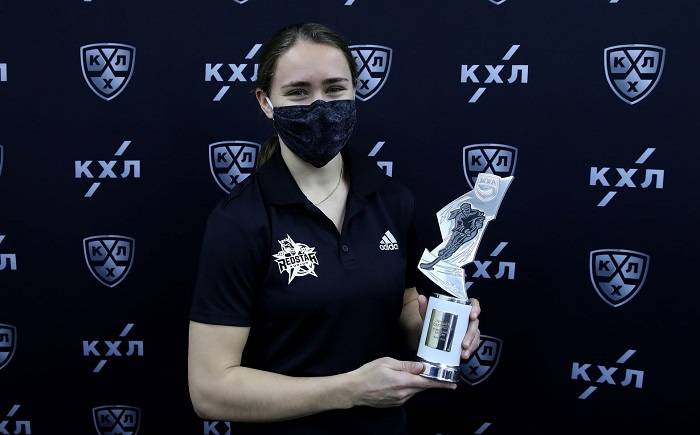 – We managed to win the cup right before everything around the world started getting worse. We talked about how we were lucky to be able to wrap it up in three games and get home. At the same time, it was a unique experience. We had to leave China before the finals, but in Ufa we really felt at home, everyone worked really hard to make that happen. We really felt like we were playing on home ice.

– What were your expectations before you came to Russia? Did you expect your team to win the cup, and that you would be the MVP?

– I think, first and foremost, we were all expecting a new challenge and were looking forward to the opportunity of playing in the WHL.

– What’s your favorite memory from your first season in the WHL?

– The first game of the final series against Agidel. They kept beating us in the regular season, so going up against them in the final and winning that first game was a special feeling that really stays with me.

– And what about off the ice?

– When we first went to play at Tornado, we got to spend a day in Moscow. And we ate pelmeni in a kind of soup. At first I wasn’t even sure what we were eating, but it was really tasty!

– This season you have some Russian players on your team. Are they teaching you to speak Russian?

– Yeah, they’re teaching us bit by bit. Sasha Vafina is a big help, not just with the language but also telling us a lot about Russian culture and making it easier for us to get used to. Right now, I can’t say all that much, just ‘spasibo’ (thank you) and ‘pozhaluista’ (please). But ask me again at the end of the season, I’ll have learned much more!

– KRS Vanke Rays brought some of the best players in the world to the WHL. We have World and Olympic champions, medallists from international events. Alexandra Carpenter is the brightest star playing in our league and she thoroughly deserves this award. Throughout last season, she proved that she is the best player in the WHL and we’re delighted that the coaches in the league shared this opinion.