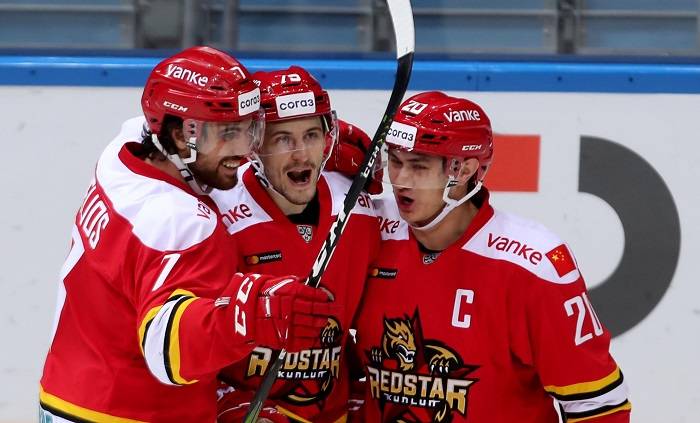 Tuesday saw Jeremy Smith back on the ice in a Red Star uniform. The popular American goalie was a big player for us last season, splitting the game time exactly 50/50 with Simon Hrubec and pulling off some big wins along the way. Those included a 3-1 success against Ak Bars and our 4-2 triumph against today’s opponent, Amur, in the most recent edition of our Far Eastern rivalry. Smitty was always due to return this season, but the difficulties that everybody faced with travel during the pandemic delayed that process and he was only able to officially rejoin the club earlier this month. After two games as understudy to Dmitry Shikin, it made sense to put him into the action tonight as the Dragons embarked on their second game in 24 hours.

That wasn’t the only change. Alexei Kovalev switched things around on defense, bringing back Sam Lofquist and Denis Osipov, while Ruslan Pedan and Viktor Baldayev got a rest. With an eight-game losing streak weighing on the team’s shoulders, the hope was that yesterday’s unfortunate overtime reverse against Dinamo Riga could prove a catalyst against an Amur team that has been unpredictable all year.

Smith, back between our pipes for the first time since Feb. 24, found himself busy right from the start. Amur began the game in a determined mood and had the better of the opening stages. However, it wasn’t until Ethan Werek took a penalty that our visitor found a way through our defense: Pavel Turbin’s point shot beat Jeremy, whose view was impeded by Nikita Kamalov getting the way on the doorstep.

Red Star’s first power play of the game arrived late in the first period and brought with it a flurry of shots on Marek Langhamer’s net. The best of these chances saw Ivan Nikolishin going agonizingly close after Ryan Sproul circumnavigated the net. Soon after, a point shot through traffic drew a fine glove save from the Czech. We also saw a small fight between Kamalov and Luke Lockhart as the opening frame reached a lively conclusion. According to the stats, there wasn’t much between the teams; sadly, that Turbin shot made all the difference to the numbers that really matter.

Slava Leshchenko’s first goal for the team changed all that. Our new forward began the middle stanza by picking up a penalty, but once released he got himself straight into the game. From the box, he moved directly to the gap between the hash marks, perfectly positioned to collect Lockhart’s pass off the boards, drag the puck back and launch a wrister from the inside edge of the left-hand circle.

Unfortunately, the Dragons were not able to build on that boost. Smith was kept busy in our net as the shots rained in, before Amur regained the lead just after the midway stage. Turbin, scorer of the first goal, pinged in a point shot and Dmitry Lugin managed to hold off the challenge of Jake Chelios and stuff the puck home.

As the second period drew to a close, Red Star tied the game once again on a play that was more important than it was beautiful. Trevor Murphy made the rush down the right and fired the puck to the danger zone. Werek and David Bondra were on hand to pressure Langhamer, and the puck dropped on to Andrei Bakanov’s stick for a close-range finish that sent us to the second break at 2-2. In recent games, Bakanov has had a frustrating time, named as a 13th forward and not making it onto the ice against Ak Bars or Dinamo Riga. But the teenager’s attitude has always been positive and that was rewarded with his second goal of the season.

For a time, that seemed to change the whole pattern of the game. If Amur dominated much of the second period, the third began with the Dragons on the rise. Suddenly Langhamer was the busier of the two goalies and there was a sense that the momentum was tipping in our favor. But then came a penalty on Alexei Toropchenko and the Tigers’ power play struck for the second time on the night. Alexander Gorshkov was the scorer and the visitor led once more with only eight minutes left in the game. Then, as Red Star pushed for yet another equalizer, a counterattack ended with Dominik Masin firing home his first goal in the KHL to put the game out of reach.