Another day, another shut-out 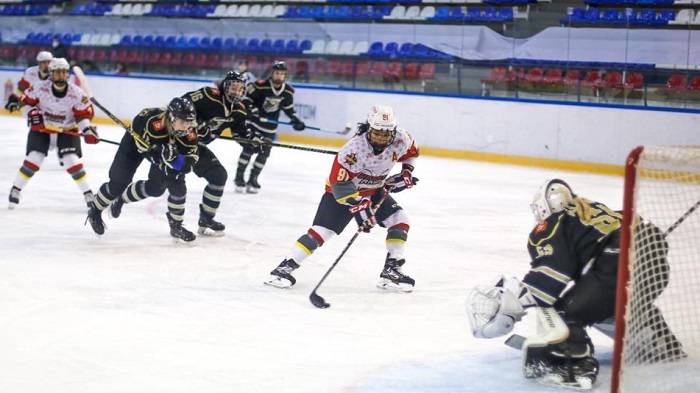 KRS Vanke Rays blanked Tornado for the second time in two days. Kimberly Newell remained perfect in this mini-series, stopping 18 shots today, and despite a game heavily disrupted by penalties for both teams – 40 minutes in total, evenly shared – the Rays proved too strong.

Monday’s meeting in Dmitrov was settled by two early goals from the Lady Dragons. Tuesday’s would play out rather differently. Tornado began with an early power play, and almost converted that into the opening goal when the home team fashioned a chance for Anna Shokhina at the back door. However, Kimberly Newell was eager to continue her shut-out streak and swallowed up the shot from the experienced Russian international.

That gave notice that Tornado was keen to learn from Monday’s loss and our host was ready to show far more attacking intent than it managed in that 0-2 defeat. However, once the Rays got on the power play for the first time, the game reverted to a familiar pattern. True, Tornado managed to kill that penalty, but Yekaterina Davletshina was only out of the box for six seconds before Alexandra Vafina arrived at the back door to put away Kaitlin Tse’s diagonal feed and open the scoring on 6:10.

Tornado continued to press, though, and Varvara Boriskova spurned a great chance after Nina Pirogova’s rush from defense saw a shot deflected between the forward’s skates when the goal was at her mercy. That triggered a counter-attack, with Jessica Wong clean through on the home net only to be denied by Anna Alpatova’s pads. The afters sparked a small fight – yes, even in women’s hockey you can see tempers running high – after Wong was shoved in the back by Pirogova and Leah Lum came galloping in to stick up for her team-mate. The upshot was a rash of minor penalties and play continuing with five skaters for both teams.

The game continued to be punctuated by minor penalties, with neither team able to establish its rhythm on the action. The second period saw another good chance for Tornado when Shokhina got clear of our defense during a spell of 4-on-4 action. However, she fanned her shot when she got close to Newell and our slender lead remained intact. Soon after, it increased. A moment of hesitation from a Tornado player on her own blue line gave Jessica Wong the chance to rush in and force the turnover. From there, it was a straightforward task to advance and score a second goal on Alpatova.

Then came Vanke Rays power play, and a goal for Alex Carpenter. It was a familiar play: Minnamari Tuominen’s feed from deep went into the zone for Carpy to chase; our free-scoring forward’s fearsome pace and clinical finishing did the rest. 3-0 to KRS just over halfway through the game, and another victory seemed to be in the bag.

The third period brought more penalties. Eventually, the Rays turned one of their power plays into a goal, with Kaitlyn Tougas skating out of the box to get on the end of a Leah Lum feed and score her second in two games against Tornado. Lum completed the scoring with a fifth goal late in the game, and the Lady Dragons left Dmitrov with a pair of shut-out victories to celebrate. Newell, who twice blanked the home team, was called upon to make one last save, denying Shokhina in the final minute to secure that unblemished record. The girls remain in second place, but the win closes the gap on leader SKIF to seven points – and our team has four games in hand on the early-season pace-setter.