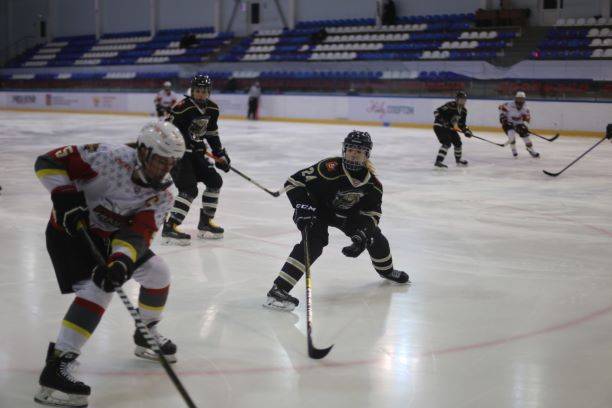 Sometimes, it only takes a couple of minutes to win a hockey game. And that was very much the story of Monday’s match-up between the Lady Dragons and Tornado, as our girls made a winning return to the ice after a three-week break.

The long lay-off, caused in part by opposing teams struggling with reported COVID cases in the ranks, clearly left the Rays hungry for hockey. From the opening seconds of the game, the team stormed forward in search of goals – and there wasn’t long to wait.

It took just 70 seconds to break the deadlock. Alena Mills couldn’t win her face-off but Alexandra Vafina was quick to chase the puck behind the net and forced the home defense to cough up the puck. A pass to the front gave Kaitlyn Tougas the chance and she duly obliged for her second goal of the season.

Less than a minute later, it was 2-0. This time, Jessica Wong stole the puck in the Tornado zone, took it round the back and fed Rachel Llanes on the doorstep. Her shot was charged down, but Megan Bozek was on hand to pick up the pieces and sweep home from the top of the left-hand circle.

After such a fast start, the game settled into a more natural rhythm. Tornado clearly wanted to try to force the pace and get a way back into the game, but there were few opportunities for the home team to put pressure on Kimberly Newell in our net. The 26-year-old was on her way to a first shut-out in her third appearance this season, but much credit must go to a team performance that allowed just one shot on goal in the opening frame and 12 overall.

If there was cause for concern it came at the other end. Chance after chance came and went, especially in the first two periods when those early openers heralded a total of 31 shots on target. Anna Alpatova, Tornado’s 18-year-old goalie, performed heroically to keep her team in the game – and managed the rare feat of keeping Alex Carpenter off the scoresheet – but there was never any serious doubt about the outcome.

With a rematch coming tomorrow, it made sense to see out this game with a minimum of fuss, and the Rays did just that. Even if the tempo dropped at times, there was always a feeling that, if necessary, the team could move up through the gears again and take it away from Tornado.  The win keeps Brian Idalski’s squad clear in second, a couple of points ahead of Biryusa and 10 adrift of SKIF. However, the runaway leader’s advantage owes much to playing 12 games already this season. By contrast, the Lady Dragons have completed just seven and have plenty of scope to catch the early pace-setter.