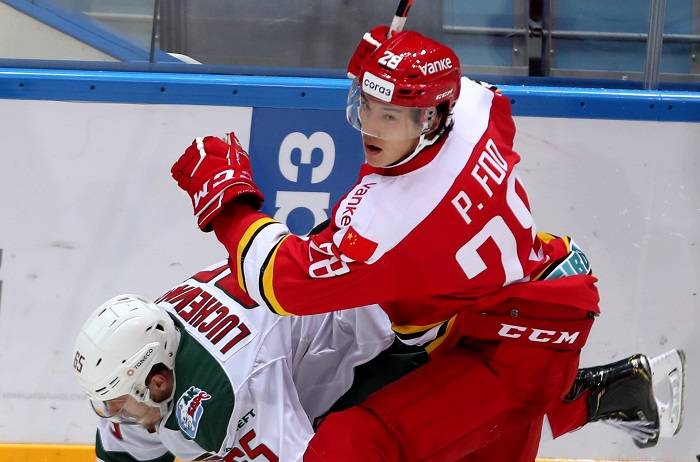 It’s never easy to win hockey games without making the most of scoring chances. And Saturday’s action illustrated that old truism once again, with visitor Ak Bars showing the way to be clinical in front of goal while the Dragons wasted too many opportunities against opposition of this caliber.

The overall stats suggested a closer game than the final scoreline. Red Star had more attempts than our table-topping visitor – 64-60 – and there wasn’t much in it for shots on target (29-31). But the Eastern Conference leader made the most of the chances that came its way, ending the game with a comfortable winning margin.

Despite the big gap between the teams in the league standings and the obvious divergence of our recent form, the Dragons produced a vigorous first period performance that made it hard to say which team was far ahead of the other. An early breakaway chance saw Adam Reideborn forced into a reaction save as Hunter Shinkaruk redirected a Sam Lofquist shot. Later, the Swedish goalie did well to get a piece of a Casey Wellman shot as Ethan Werek put up a screen in front of the net and also stop a dangerous point shot from Ryan Sproul. Werek’s line was a constant threat and the opening session ended with Wellman shooting just wide when well placed in front of the net.

Unfortunately, amid all the near-misses at one end, Ak Bars was on target at the other. Nigel Dawes scored his ninth of the season when he unleashed his wrister from the inside edge of the circle and left Dmitry Shikin helpless at the puck whistled into the net.

If Red Star came out for the second period feeling somewhat aggrieved to be behind after an even opening frame, that sense of frustration intensified at the start of the middle frame. Within a minute, Kristian Khenkel’s defense-splitting diagonal presented Justin Azevedo with the second goal of the game. Less than a minute later, Daniil Zhuravlyov made it 3-0, giving the Dragons a mountain to climb.

Kunlun’s best chances of the second period came later. First, Voronkov attempted a slap shot and snapped his stick, presenting Alexei Toropchenko with a breakaway chance that Adam Reideborn deflected over the top. Then Parker Foo went one-on-one with the visiting goalie, only to be denied by a pad. Sergei Monakhov failed with the follow-up as home frustrations mounted.

There was better news at the other end, with Shikin robbing Dawes of a second goal with a great glove save but this game was steadily drifting away. A penalty for Ivan Nikolishin seconds before the intermission merely added to the Dragons’ woes and produced a fourth Ak Bars goal at the start of the final frame. Kirill Petrov was the scorer, firing home from a Danis Zaripov feed. It took a video review to confirm that Petrov’s shot had got beyond Shikin’s pad and over the goal-line, but there was to be no reprieve.

Our performance deserved some reward, though, and after Artyom Lukoyanov and Sam Lofquist came to blows in the 47th minute we got on the power play and even though Ak Bars survived that challenge, the shift of momentum led to our first goal. Toropchenko was the scorer, marauding into the Ak Bars zone and shooting early past a startled Reideborn. The Swede was caught hopelessly off balance and never came close to getting down to Alexei’s low shot. Consolation began to look like competition a couple of minutes later when Luke Lockhart made it 2-4.

The revival was soon snuffed out, Zaripov converting the rebound from an Azevedo shot to make it 2-5.