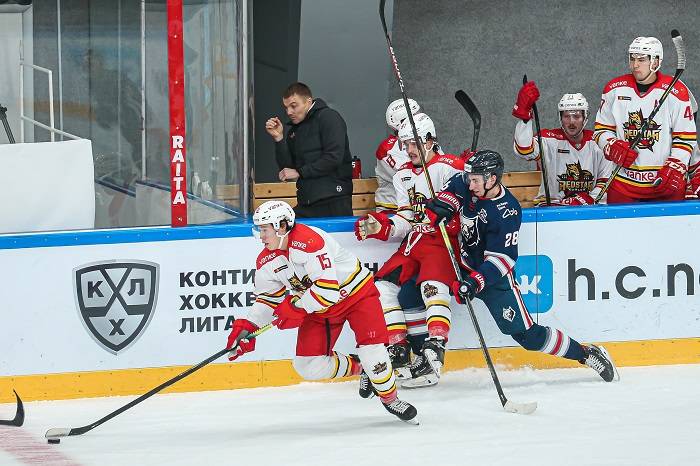 Red Star missed the chance to move off the foot of the Eastern Conference after going down to Neftekhimik in a high-scoring game. The Dragons started well and finished strongly, but much of what happened in between was a big disappointment.

Alexei Kovalev made three changes to his team for this game. In goal, the return of Dmitry Shikin was enforced by the trade of Simon Hrubec to Avangard. Simi debuted for his new team today and backstopped a 3-2 win for the Hawks. On the ice, two of our American contingent returned to action – defenseman Sam Lofquist and forward Danny Kristo, both of whom missed the previous game.

The Dragons were quick to get into their rhythm, winning an early power play and using the opportunity to get in front. Ryan Sproul was the scorer, firing home from the right-hand dot to give us a perfect start. Even when Neftekhimik was handed a PP chance of its own, Red Star continued to shine. Not merely at the back, where diligent defense kept the danger to a minimum, but also going forwards as Alexei Toropchenko dinged the piping. Neftekhimik, with just one win in seven games, looked to be in trouble.

However, the home team found two quick goals late in the first – and one came from a familiar face. Andrei Kostitsyn had a spell as a Dragon, but showed no mercy when Bulat Shafilgullin’s diagonal pass picked him out on the right. Barely a minute later, Daniel Butsayev gave Neftekhimik the lead. As a player, Kovalev often tangled with Daniel’s dad, Vyacheslav – the two were rivals in the NHL for a time. Today they clashed as coaches.

Then in the second period, it all went downhill fast. Two goals from Libor Hudacek – one slotted home from between the hash-marks, the second, on the power play, tucked away from close range – extended Neftekhimik’s lead to 4-1. However, those raw numbers did not really tell the story. In truth, were it not for some brave goaltending from Dmitry Shikin – confirming his status as #1 following the departure of Simon Hrubec to Avangard – kept the score from reaching embarrassing proportions.

Shikin frequently found himself facing down solo breaks and odd man rushes as the home offense found it all too easy to break through the Dragons’ defenses. Marat Khairullin, Bulat Shafigullin and Rafael Bikmullin all had excellent looks at our net without adding to the scoring. And our goalie even halted a penalty shot, denying Ildar Shiksatdarov after Jake Chelios was stripped of the puck in his own zone and responded by hooking back the goalbound Neftekhimik forward. At the other end, we created some chances but Georgy Ivannikov did a good job stopping Alexei Toropchenko, Hunter Shinkaruk and Danny Kristo as the home team built an imposing lead.

Shikin’s excellence was obvious in the middle frame, but not even he could prevent Bikmullin from adding to the score in the third. The Neftekhimik forward got the puck behind the net and sprang out to score on the wraparound. Again, though, questions might be asked of the defense as a disappointing night seemed destined to get worse.

Then, improbably, came a fightback. Alexei Toropchenko got things started, stuffing one home from close range to bring some respectability to proceedings. Then, within 23 seconds, Casey Wellman fired home a Jake Chelios feed to make it 3-5 with 12 minutes to play. There was an audible murmur of disquiet among the home fans – in Tatarstan, supporters are allowed into arenas, albeit in limited numbers – as they contemplated the prospect of their team’s fragile confidence melting away. For Casey, meanwhile, that’s two goals in two outings after waiting 11 games to open his account for the club.

It was not enough to change the game, though. The Dragons fought to the end but were finished off when Alexei Volgin smashed the puck into an empty net. An entertaining game ended in frustration, but we get to do it all again on Thursday at Torpedo.