Back in action - Kunlun Red Star

The international break is over and it’s eyes down for a busy run of games. Red Star’s roster saw some changes during last week’s pause, with goalie Simon Hrubec moving to Avangard. Hrubec’s departure will be a significant loss – the Czech performed impressively during his time here – but Dmitry Shikin is an able replacement. In addition, Scott MacPherson, the club’s GM, stepped down from his role for health reasons. His role will be taken by Nikolai Feoktistov, who has already worked with the organization and helped to set up our teams in the VHL, MHL and Women’s Hockey League.

It’s a slightly unusual week for the team, with a two-game road trip followed by a stand-alone home game against Traktor on Saturday. The opener in this sequence, away to Neftekhimik, offers a chance to move off the foot of the Eastern Conference table. 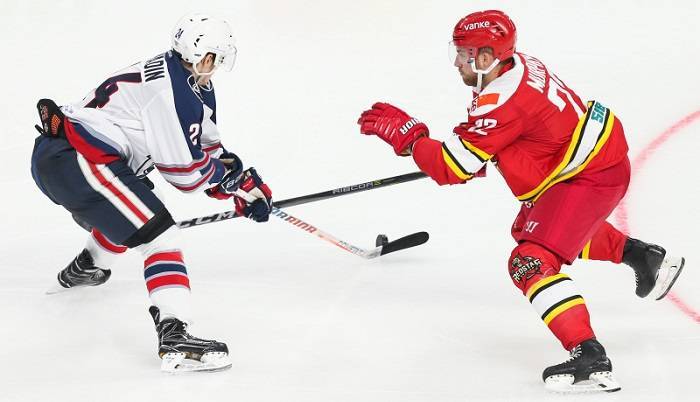 When we played Neftkehimik in Mytishchi on Sep. 29, a 3-4 loss did not tell the whole story. Despite trailing 0-3 early in the second period, the Dragons fought back hard – lifted by two goals from Tyler Wong – and came close to saving the game. Our first win of the season was still a couple of weeks away, but here was evidence of how the team was picking up form.

Defenseman Mikhail Sidorov played six games for the Dragons early in the season, including that game against Neftekhimik. Last month, though, he left the club to join Neftekhimik, where he has also featured six times so far. Former Red Star forward Andrei Kostitsyn (13 points in 22 games in 2017/18) is also at Neftekhimik now. He wore the ‘A’ in Saturday’s 3-1 win at Dinamo Riga.

Prior to that win in Latvia, Neftekhimik was on a six-game skid that saw the team drop to the foot of the Eastern Conference. Snapping that series at Dinamo lifted Vyacheslav Butsayev’s team ahead of Kunlun – but a win in regulation here would take us out of the basement once again. Libor Hudacek could be the man to watch: the Slovak forward had a hand in three of his team’s four goals in our previous meeting and, as he settles into the KHL, his recent form has brought a flurry of points. Hudacek has 4 (2+2) points in his last five games, while eight of his 12 KHL points to date came in his last nine appearances.

When Torpedo came to Mytishchi, the game finished with the Dragon’s second victory of the season. Goals from Hunter Shinkaruk, Ivan Nikolishin and a first in the KHL from Alexei Toropchenko set up a 3-1 verdict. Just over a year ago, on our previous trip to Nizhny Novgorod, Red Star claimed a 2-1 victory on a power play goal from Cory Kane, recording its first ever win against this opponent.

Sam Lofquist has been a regular contribution to Red Star’s story in his two spells on our blue line. But his KHL career began in Nizhny Novgorod in 2016/17, when he helped Torpedo make the playoffs. Fellow D-man Viktor Baldayev also had a short time at Torpedo, playing seven games in the 2017/18 campaign.

It would be fair to describe Torpedo as ‘consistently inconsistent’. David Nemirovsky’s team has tended to alternate wins and losses this season and is currently clinging on to eighth place in the Eastern Conference. On a good day, Torpedo can take on anyone – witness back-to-back overtime wins at CSKA and Metallurg. However, the team is also vulnerable to slips against less illustrious opposition, losing three of its four games against Amur so far. Damir Zhafyarov leads the team in scoring with 16 (6+10) points from 21 games, while 19-year-old Denis Vengryzhanovsky had memorable evening on Oct. 21 when he scored twice in a 3-2 victory at CSKA.

Our two trips to Chelyabinsk this season ended in defeats. On Sep. 6 we went down 1-3, then one month later Andrei Bakanov’s first goal for the club could not prevent a 2-4 reverse.

Early in the season, our team featured several players with Traktor connections. However, as our imports have returned, they have largely moved on. There is still a link, though. Off the ice, Andrei Nikolishin, working as a consultant with our backroom team this season, captained Traktor from 2007-2011 and was head coach in Chelyabinsk from 2014-2016.

Traktor is on a rich vein of form, winning 10 of its last 13 games and sitting in fourth place in the Eastern Conference. Anvar Gatiyatullin’s team is level on points with Avangard and just ahead of local rival Metallurg, despite losing 1-4 in Magnitogorsk in its last game before the break. Fans in Chelyabinsk are looking hopefully up the table, with pace setter Ak Bars just four points clear at present.

Recent games suggest that summer signing Pontus Aberg is starting to find his feet in this league. The Swedish forward has 2+2 in his last five appearances, a big improvement on just two goals in his first 10 games for the club. Tomas Hyka continue to lead the team in scoring, while Sergei Kalinin has 14 (7+7) points so far following his summer move from CSKA.