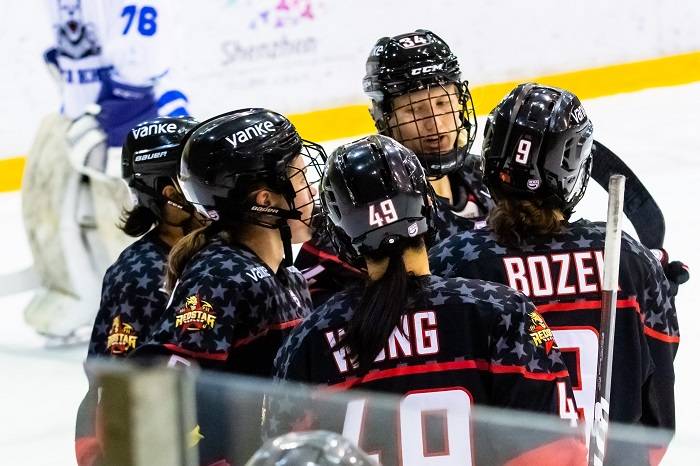 The defending champion is back at the top. A second victory in two days at home to SKSO Yekaterinburg moves the KRS Vanke Rays to 15 points from six games in Russia’s WHL. That puts the Lady Dragons level on points with SKIF Nizhny Novgorod, but with a vastly superior goal difference.

After a 6-2 win on Saturday, KRS improved to record a 11-1 victory 24 hours later. That’s the biggest margin the team has posted in its WHL career to date. Hannah Miller scored three, following Alex Carpenter, who hit the first hat-trick of the WHL season yesterday. She was one of three players to score twice in this game. Maria Pushkar and Minnamari Tuominen also got two goals.

The opening goal was not long in coming. Alena Mills won an attacking face-off, the puck went back to Kaitlin Tse at the point and her pass found Maria Pushkar next to the dot. Our summer signing still had plenty to do, turning away from a visiting defender and wiring a wrister to the top shelf to make it 1-0 after 86 seconds.

A few minutes later a video review denied the Lady Dragons a second goal, but the decision merely delayed the moment when the Rays increased their lead. Midway through the first period, Mills went round the back fed Tuominen for a shot from between the hash marks. That effort was blocked on the slot but Pushkar wrestled her way to the puck and forced it into the net. Then came two goals in 90 seconds, with Miller adding a third before Tuominen found the target for the second game in a row with a shot through traffic that wrong-footed Ravilya Ainullova.

SKSO found a response, getting a goal back when Yekaterina Zakharova’s point shot fell to Alina Narudinova for her second goal of this weekend mini-series. However, the direction of play did not much vary: KRS finished the first period on the power play, with Carpenter close to adding a fifth goal in the last seconds of the session.

Carpenter, who scored a hat-trick in Saturday’s game between the teams, did find the net at the start of the second period, extending her lead in the Russian WHL scoring race. Even a first penalty of the night for the Rays didn’t greatly disrupt our girls’ game – Mills was denied a short-handed goal by the frame of the net as the penalty was successfully killed. And once back at full strength, the host added to its lead when Tuominen potted her second of the game, floating a wrist shot from the right-hand point. Then we saw a short-handed goal when Carpenter made it 7-1 after Narudinova inexplicably coughed up the puck in her own zone. Visiting goalie Ainullova, whose performance was better than the seven goals she allowed might suggest, was replaced by Alina Kolina for the remainder of the game. The newcomer was soon called upon to stop a powerful Megan Bozek effort as KRS sought a power play goal but Kolina got to the second intermission unscathed.

Early in the third, Rachel Llanes added an eighth goal, with Mills getting her third assist of the night and Pushkar adding a helper to her first-period goals. Miller’s second of the game, on the power play, extended the lead before Cui Huo – one of the team’s Chinese-born players – got her second of the season to bring up double figures off a Carpenter assist. 14 seconds later, Miller completed that hat-trick, with Tuominen’s helper taking her to 2+2 for the game. The Lady Dragons roared back to the top of the league in emphatic style.