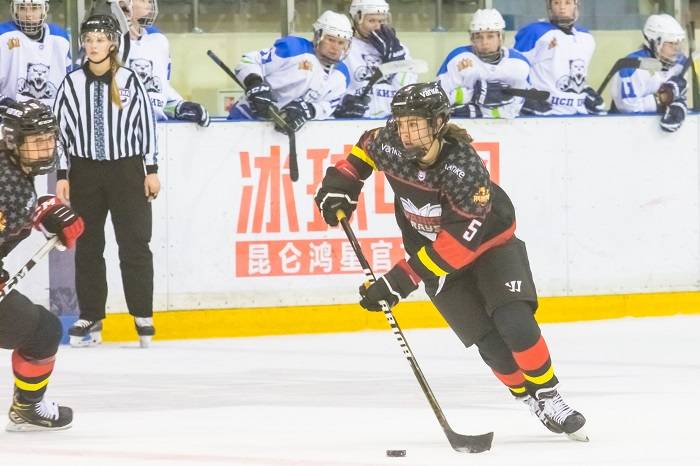 The Lady Dragons had a long wait to get back on the ice after defeat at SKIF last month. However, the team made good use of that time and bounced back with an assured victory at home to Yekaterinburg’s SKSO. This was the first game at our temporary home in Stupino – an ice rink near Moscow that is already decked out with Chinese signage. And it didn’t take long to settle into the new surroundings, with Brian Idalski’s team taking a firm grip on the game from the opening exchanges.

One big take-out from the loss in Nizhny Novgorod was the frustrating time our forwards suffered. Today, though, things went right. Early KRS pressure earned a power play and it didn’t take long for Jessica Wong and Megan Bozek to set up Alex Carpenter for the first goal of the game. Late in the opening frame, Hannah Miller doubled that lead, helped by a kind bounce as the puck skipped out of the corner just as she was moving into the danger zone.

A 2-0 lead at the first intermission did not really do justice to the measure of control that the Rays enjoyed in the opening frame. The visitor defended bravely to keep the score down, with goalie Ravilya Ainulova performing heroics between the piping.

And SKSO proved that it was not here purely to make up the numbers when it pulled a goal back early in the second period. Alina Narudinova was the scorer and, for a time, it looked like this game might prove more demanding than the early exchanges had suggested.

Carpenter, as so often, was the difference-maker. Midway through the game she potted her second goal, a fine solo effort that began when she stole the puck in center ice and ended with a snorter of a shot from between the hash marks. Then, at the start of the third, she completed her hat-trick within 10 seconds of the faceoff, grabbing another power play goal to make it 4-1.

Saturday’s game brought Minnamari Tuominen’s first game for the club. The 30-year-old is a two–time Olympic bronze medallist and joined in the summer from Keikko-Espoo in her native Finland. Her first experience of Russian WHL action was a success and she celebrated with the Rays’ fifth goal, rifling home off an Alena Mills feed after the Czech forward forced an error on the SKSO blue line. The teams had time to trade two more goals, with Rachel Llanes completing the scoring for KRS in the 49th minute. Goalie Milena Tretyak, making her second appearance this season, collected her second victory.

The result lifts our girls to 12 points from five games. A repeat performance against the same opposition on Sunday would see us tied with table-topping SKIF. Meanwhile, Carpenter's four-point haul moves her to 12 (6+6) points for the season. That puts her top of the league’s scoring chart.