Another point from Ufa 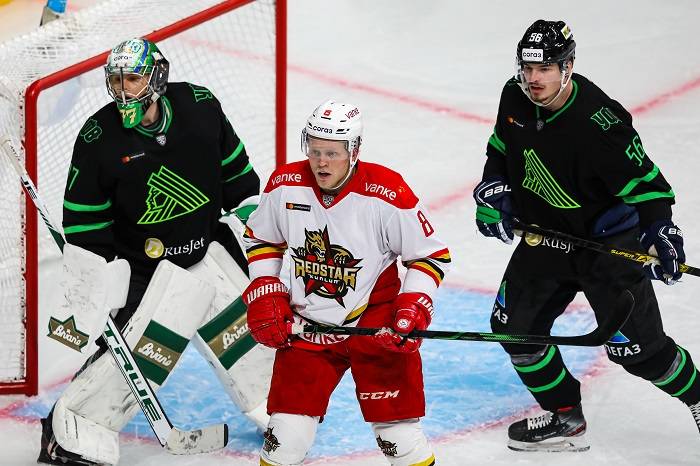 Red Star’s final game before the international break brought a trip to our favorite opponent this season. In two games at home to Salavat Yulaev, the Dragons collected their first point of the season in a shoot-out loss, then got their first on-ice victory of the campaign with a 5-3 triumph. Hopes were understandably high as we made our way to Ufa for the first time since last November – and once again Kunlun added to its points tally after tying 2-2 in regulation.

Alexei Kovalev made three changes from the last game. Josh Nicholls and David Bondra came into the offense in place of Parker Foo and Igor Larionov. Nicholls joined Cory Kane and Alexei Toropchenko on the second line, with Ethan Werek playing alongside Casey Wellman and Hunter Shinkaruk. That left room for Spencer Foo to form a first line with Luke Lockhart and Tyler Wong, while Bondra slotted into the fourth line. On defense, Denis Osipov replaced Sam Lofquist.

After an early chance for Werek, the home team took the lead with a breakaway goal. After stealing the puck in center ice, Salavat Yulaev sliced through our defenses and Vyacheslav Solodukhin finished off a well-worked move. The host continued to press – over the course of the first period, Simon Hrubec would face 23 shots – but Red Star played its part in the battle. And, from our first power play of the game, we tied the scores. Ryan Sproul launched a rocket from the blue line, Wellman disrupted the flight of the puck and Werek ensured that Juha Metsola couldn’t see enough of what was happening to deny Wellman his first goal for Red Star. The puck didn’t exactly whistle into the net, but Ethan’s screen prevented Metsola from catching it – and a video review confirmed that there was no interference on the goalie.

Both sides had chances to go in front. Our best came when Shinkaruk steered the puck narrowly wide from close range after a nice passing move found him on the doorstep. Ufa drew some big saves from Hrubec – notably towards the end of the first period when Sakari Manninen tested the Czech goalie from close range.

However, the last meaningful action of the first session saw Jake Chelios take a cross-checking penalty and that cost Red Start at the start of the second. Philip Larsen’s point shot was blocked, Manninen had a swing at the rebound and the puck dropped for Teemu Hartikainen, Salavat’s record scorer, to slot home from the edge of the paintwork.

But this was a game for our own power play to shine. Despite some fairly moderate stats for our special teams this season – ahead of this game, we ranked 14th in the KHL with 12 PP goals at a conversion rate of 18.6% – everything went right for us today. A second power play chance of the second period saw Shinkaruk smash home a tying goal off a Sproul feed to the right-hand dot. That moves Hunter to four goals for the season and gave him his first two-point game of the campaign after an earlier assist on Wellman’s opener.

The third period could not separate the teams, although it was noticeable that the Dragons greatly restricted the number of shots getting through to our net. After allowing 38 in the first two periods, we faced just seven more in the third and navigated a path to overtime and a fourth point of the season from Salavat Yulaev. Sadly, though, it wasn’t to be another win. As the extras ticked down, a Red Star shot boomed off the boards at one end and Philip Larsen took the puck to the other and scored the winning goal.