Famous win for the Dragons 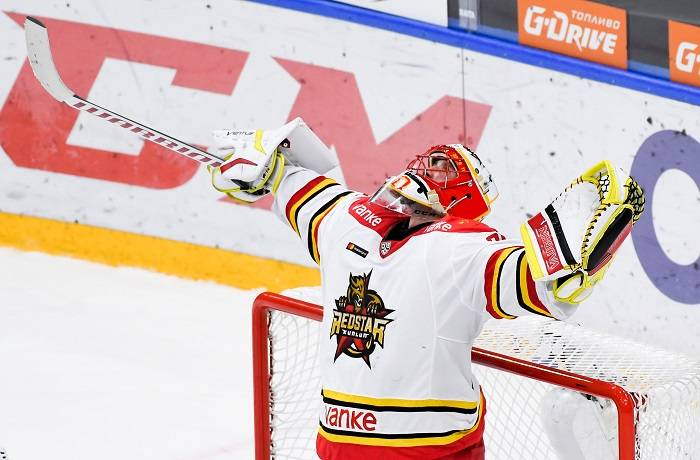 Wednesday brought another clutch of Red Star landmarks. Victory at SKA secured a first road win of the season and, more significantly, delivered a first ever win over one of the giants of Russian hockey. Eight previous match-ups with the Army Men ended in defeat – often lop-sided – with just one game going to overtime in the past four seasons.

On an individual level, this was another game-winning display from goalie Simon Hrubec, who made 42 saves as the Dragons absorbed plenty of pressure in Petersburg. And there was a famous name on the scoresheet as Igor Larionov Jr registered an assist in only his second KHL game. Larionov Sr, currently head coach of Russia U20s, was famously known as ‘the Professor’ for his educated gameplay. His son, just 22, is more of a post-grad student at present but has every incentive to make Kunlun his finishing school.

It would be tempting to look at the stats from this game and conclude that it was something of a rearguard action from start to finish. SKA took the lead early when Kirill Marchenko stuffed a bouncing puck into the net from close range and fired in 20 shots in the first period alone. Even then, though, our guys posed a threat on the counter and steadily tightened up on defense to reduce the number of opportunities available to our host.

Early in the second, true, Hrubec pulled off his best save of the game to deny Miro Aaltonen with a combination of outstretched skate and goalpost. Subsequently, though, we locked down the defense and limited SKA to a handful of shots. The Army Men were able to set up camp in our territory but failed to make any significant advances where it counted.

Then came the hammer blow. Two goals in two minutes as the middle frame drew to a close turned this game upside down. First, Trevor Murphy’s speculative pass released Tyler Wong into the danger zone. He ripped past Lukas Bengtsson and advanced to score on young Yaroslav Askarov, back in the SKA net for the first time since Sep. 20. Then Sergei Monakhov kept the puck in the offensive zone – just – and combined with Larionov Jr to set up Ryan Sproul for a shot from between the hash marks. One minute before second break, and the Dragons had the lead.

SKA might have reflected that both Monakhov and Larionov were part of the club’s junior set-up before moving on to seek their hockey fortunes. Now back to haunt their alma mater, they succeeded in transforming this game.

Of course, there was still work to do. SKA hit the bar early in the third when Vladislav Kamenev rattled the frame of the goal with Hrubec – for once – beaten. Many in the arena believed it was 2-2, but the puck was nowhere near the goal line as it flew to safety. The Army Men continued to press, but our defense was diligent. Even two home power plays did little to disrupt our disciplined positional play at the back, and clear-cut chances were few and far between. Indeed, the best opportunity on those PPs came at the other end, with Yaroslav Askarov called upon to make a sprawling stop to deny Alexei Toropchenko on the breakaway.

In the end, our efforts left SKA bereft of ideas. Inevitably, there was a final storm, but there was also a sense some time before that the home team was not going to find salvation this time. The hooter brought confirmation – after eight losses over four seasons, the Dragons had conquered the Neva’s hockey fortress for the first time and secured a first win on the road thisa season.