Taking confidence on the road

What a difference a few days can make. As the Dragons went into their last home stand, our team was rooted to the foot of table and desperate for any kind of result. Then came a run of three straight victories and a surged of renewed belief throughout the club. The upswing owes much to our returning players gaining fitness and form – in recent games we’ve seen Sam Lofquist produce five points from the blue line, Hunter Shinkaruk on a three-game goalscoring streak and Alexei Toropchenko get his first goals in the KHL.

Now we’re out on the road again, with three big clubs waiting to test the revived Dragons. 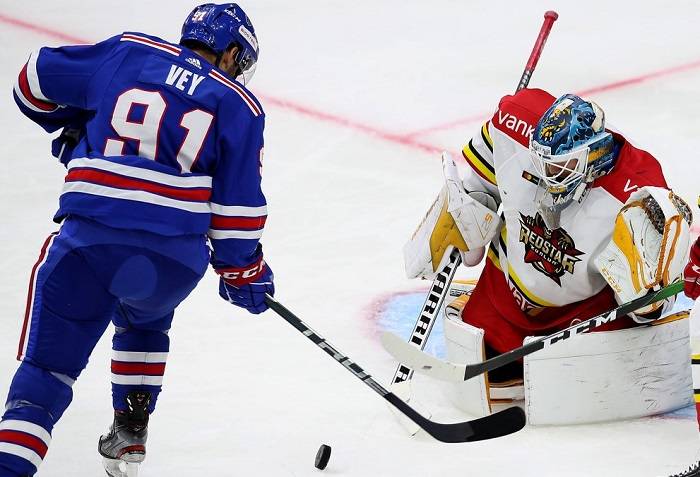 Last season: When SKA came to Beijing last November, Red Star made history by taking the team to overtime for the first time. Two goals from Victor Bartley secured a battling 2-2 tie before youngster Kirill Marchenko denied the Dragons a first ever win against the Army Men. The other seven meetings between the teams have been nowhere near as close, typified by a 1-4 loss in Petersburg in our second game last term.

Familiar faces: Magnus Hellberg needs no introduction to Red Star fans after his season with us in 2017/18. The Swede’s form for the Dragons earned him a call-up to the PyeongChang Olympics, then an active role in helping the Tre Kronor win World Championship gold in Copenhagen. Fewer people will recall that his opposite number Dmitry Shikin made his KHL debut for SKA back in October 2013. A 3-1 win over Neftekhimik was the first of just three appearances for the Army Men before his move to Sochi.

Background: SKA’s recent form has been well below the club’s usual high standards, although a big win over Avangard last time out suggests things are starting to improve. The Army Men have alternated wins and losses of late, and the team’s progress suffered while head coach Valery Bragin was one of several figures absent through illness. Bragin is back behind the bench now and most players are available, although defenseman Anton Belov and forward Bogdan Yakimov were both on the injured list ahead of Monday’s game at home to Avangard. In-form Andrei Kuzmenko leads the team in scoring alongside Vladimir Tkachyov, while on-loan duo Vladislav Kamenev and Yakov Trenin have made promising contributions since arriving from North America.

Last time out: Our previous visit to Kazakhstan back in September ended in a 2-3 loss, despite German Shaporev potting his first KHL goal. This game was also notable for the first time we scored a goal before the last minute. Surprisingly, it’s also the last time Barys got a win in regulation.

Familiar faces: He was Canadian when he made his KHL debut with KRS, but now Jesse Blacker is a fully-fledged Kazakh international defenseman. The current season is his third in Kazakhstan. Linus Videll featured in our debut season and set a record for our fastest goal that lasted until the weekend, when Alexei Toropchenko beat his 40-second goal against Medvescak.

Background: Last season, under Andrei Skabelka, it was pretty clear what to expect from Barys: discipline, solid defense and consistent performance levels throughout the regular season. But Skabelka is gone and his replacement, Yury Mikhailis, has yet to impose a clear identity on his team. Disruption due to the pandemic has not helped: Barys had a spell in quarantine, as mandated by local legislation, and is still unable to play before a home crowd in Nur-Sultan (a challenge that we are now facing in Mytishchi, making for an unnerving game-day experience). But it also feels that this team lacks the edge to put opponents away. Of 14 games played to date, eight went to overtime. One of those saw Jokerit recover from 0-4 with 15 minutes to play in one of the most remarkable KHL comebacks of all time. Darren Dietz continues to lead his team from the front, but Barys feels like a work in progress just now and a 1-3 loss to Sibir on Monday leaves the team outside the playoff places.

Last time out: Like you’ve forgotten this one. A 5-3 win over the men from Ufa snapped our losing start to the season in some style and reminded the KHL that we are not here to be pushed around. With a shoot-out loss earlier in the season against Salavat Yulaev, we go to Bashkortostan confident of getting something from one of our favorite opponents.

Background: In an unpredictable KHL season, Salavat Yulaev remains one of the great enigmas. Tomi Lamsa’s team has the quality to frighten any opponent and hardly lacks for firepower. A top line of Granlund, Hartikainen and Manninen represents a trio of Finnish plunderers raiding Russian defenses with aplomb. And the rising stars of Rodion Amirov aand Shakir Mukhamadullin are grabbing headlines with their feats this season. Yet the overall picture remains blurred around the edges, with a shaky defense ensuring that Ufa can always be beaten. In particular, the men in green struggle against top opposition: two 1-4 losses to eternal rival Ak Bars, defeats against Avtomobilist and CSKA and, most recently, a hammering from in-form Lokomotiv to start this current home stand. In two meetings so far, we’ve exposed some of Salavat weak spots – can the Dragons get more points in round three of this rivalry?