Dragons give the leader a real scare 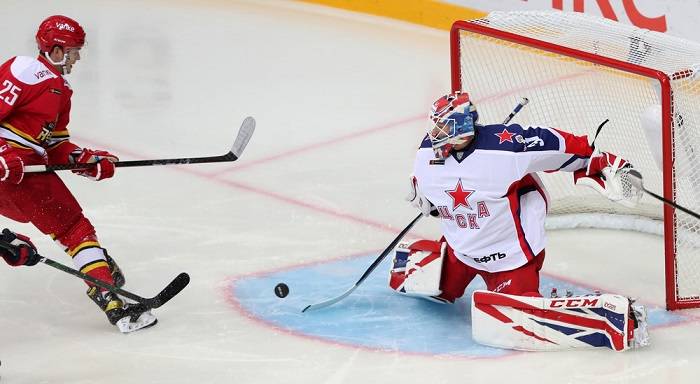 At the start of this home stand, few would have anticipated anything other than a heavy loss from this game. Yet, such was the upturn in our form over the preceding three games, it became possible to make a case that even against the runaway league leader, last season’s top team and the 2019 Gagarin Cup champion, the Dragons had nothing to fear.

Going into the game, Red Star welcomed back alternate captain Cory Kane on the third line, slotting alongside Ethan Werek and Alexei Toropchenko. Experienced defenseman Andrej Sustr was also back in action, paired with Trevor Murphy on the blue line. Simon Hrubec took over from Dmitry Shikin in goal.

That fearlessness was evident from the very start. The first meaningful attack of the game brought Kunlun’s opening goal. Jake Chelios sent Kane into the danger zone and his pass to the back door was steered into the net by Toropchenko. With 34 seconds gone in the game, it would take longer for the video review to return with the thumbs-up. Alexei claimed the fastest ever KRS goal, beating Linus Videll’s 40-second effort against Medvescak Zagreb back in our debut season.

A flying start, for sure, but in no way a cue for CSKA to open the floodgates. The Dragons continued to contest an even first period and there was little sign of the gulf that separates these teams in the KHL standings. It took a power play for the Army Men to tie the scores, Maxim Shalunov spinning to fire in a shot from the top of the right-hand circle, and even then, Red Star was not dimmed. As the first intermission approached, Ryan Sproul delivered his first goal of the season. The defenseman intercepted an attempted clearance on the blue line, stepped forward and drove a shot past Lars Johansson. A great start to the first period was followed by a great finish.

In the end, it wasn’t quite enough. CSKA’s quality is well known and the visitor recovered in the second period to secure a slender 3-2 lead. Even so, there were chances that could have changed the outcome. Early in the middle frame, Werek was desperately close to making it 3-1 but his attempt from the slot squeezed just wide. Then, after Pavel Karnaukhov tied the game for a second time, Tyler Wong hit the post as our only power play of the game so nearly saw us regain the lead.

The decisive blow came on a CSKA power play, though. Nikita Korolestyov did the damage, fashioning a chance off skate and stick to get to the doorstep and beat Hrubec from close range. A classy finish, and one that reminded everyone why the Army Men are consistently at the top of this league.

The final frame was all about game management. CSKA showed every respect to our offense, aware that a slender lead could evaporate all-too-quickly due to inattention. As a result, chances were scarce in the third period and our efforts came up narrowly short. But, with three wins from four games, this home stand has transformed the mood around the team and there’s a sense of real confidence as we head out on the road once again next week.