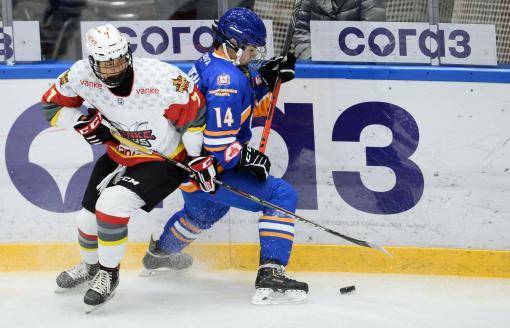 The Vanke Rays missed the chance to move to the top of the Russian Women’s Hockey League table after suffering a surprise defeat at SKIF. Brian Idalski’s team, so impressive in its opening three victories, struggled to reach the same level of play in this game and met a home goalie in inspired form. Valeriya Merkushova made 31 saves to blank the Lady Dragons, while Yekaterina Likhachyova’s sixth goal of the season separated the teams.

The Rays continued to rotate their goalies, with Kimberly Newell coming in for Noora Raty after the Finn’s shut-out yesterday. And Newell had an early scare when she faced down Oxana Bratishcheva’s solo rush. Bratishcheva was something of a thorn in the Rays’ side in the first period, having another good chance to open the scoring with SKIF on the power play early in the game.

However, the Lady Dragons were not about to roll over. The ever-dangerous Carpenter-Llanes combination clicked into action to create the best opportunity of the first 10 minutes, but Merkushova was equal to the threat. Despite those promising signs, though, the first period ended goalless with the Rays struggling to match the high tempo of their previous performances.

At the start of the second, that began to change. Play was increasingly at one end of the ice and Merkushova was much the busier of the goalies as KRS turned the screws. But, just as the pressure was building, a pair of penalties against our girls enabled SKIF to get back into the game. Likhachyova, SKIF’s leading scorer this season, had a great chance only for Newell to close the door. Once back at full strength, though, the Rays continued to control the game. Megan Bozek was the next player to test Merkushova, sent clean through by Alex Carpenter but unable to find the key to the home goalie.

One of the Rays’ problems in the first two periods was a steady string of penalties – our girls took five minors, while SKIF stayed out of the box. But early in the third that changed and the visitor got a 5-on-3 advantage for 1:33. Out came the big guns – Alex Carpenter’s line, backed up by Bozek and Jessica Wong – and they pounded the home net with shots but still could not find a way through. The game remained scoreless going into the final 10 minutes of regulation.

Then came another penalty on KRS and this time SKIF managed to take advantage. It was hardly a classic power play goal. Far from camping out in our zone, the home team found itself recovering the puck behind its own goalline. But from there Likhachyova went coast-to-coast, evading the defense to score a fine individual goal.

There was still time to get back into the game but hopes of a recovery ebbed and flowed as players from both teams came and went from the box. In the event, the Rays came up just short – a last-minute chance for Leah Lum brought yet another big save from Merkushova, her 31st of a hugely impressive performance.

And so the Lady Dragons missed the chance to climb to the top of the table, going down to a first defeat of the season by the narrowest of margins. But this team already knows perfectly well that leading the standings in October is no guarantee of hardware come March. And, after splitting the points with one of the stronger teams in the WHL on its own ice, our girls can look forward to starting their home campaign next month with back-to-back games against Dynamo Neva from St. Petersburg.