Three out of three 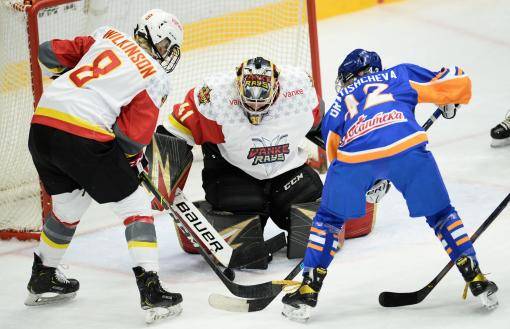 Another day, another victory. The Vanke Rays’ trip to unbeaten SKIF promised a tougher test, but the Lady Dragons came out on top against an opponent looking to climb to the top of the table. With the repeat fixture coming up tomorrow, our girls can assume top spot for themselves with another victory.

The game in Nizhny Novgorod brought a first appearance of the season for goalie Noora Raty. The Finnish international excelled, making 29 saves as we enjoyed our first shut-out of the season. And that was in the toughest encounter KRS has faced so far. SKIF, a team with a long-standing pedigree in Russian women’s hockey, began this season with back-to-back wins over Agidel, our closest rival last season. An opponent of that caliber represents a real step up from the rookies of 7.62, who provided the opposition in our first games.

And the pattern of play proved the point. If our opening fixtures were more procession than contest, this was a battle from start to finish. From Russian international goalie Valeriya Merkushova, always a solid proposition between the piping, to leading scorer Yekaterina Likhachyova, who had more goals than anyone else in the league with five goals from four games ahead of today, there’s undeniable quality in this SKIF team. From the opening moments, the teams traded chances and it said much for the quality of Raty and Merkushova that the scoreline remained blank until the 16th minute.

However, the first goal was always likely to be crucial – and it was the offensive power of the Rays that broke the deadlock. Not, though, the forwards. Instead Megan Bozek surged out of defense, deceived the home team by shaping to pass in center ice and powered into the SKIF zone. A well-placed shot angling in from the right-hand circle beat Merkushova and gave KRS the lead.

The middle frame brought some of our best hockey of the game. Even on the penalty kill, the Rays were able to keep taking the game to SKIF and a second goal, arguably, was scant reward for that effort. Maria Pushkar was the scorer – three in three games for her now – after getting on the end of an Alena Mills pass. At the other end, a well-drilled defense kept the home team to the outside and Raty was more than equal to any shots that got through to her.

In the final session, the Rays’ game management came to the fore. With another tough test just 24 hours away, the key thing was to close out the game and deny SKIF any chance of a recovery. Carefully lowering the tempo of the action and playing disciplined hockey on both sides of the puck, our girls steadily squeezed the life out of the opposition. A third goal, Leah Lum redirecting a Kiana Wilkinson shot with five minutes left, did no harm either.

Thus, our 100% record continues and, if the team makes it four in a row tomorrow, we’ll get to the top of the table on 12 points, alongside Agidel and SKIF. Unlike our two rivals, though, we would have four wins from four games, not six. The defending champion is already making it clear that it will be no simple matter to wrest the crown away this season.