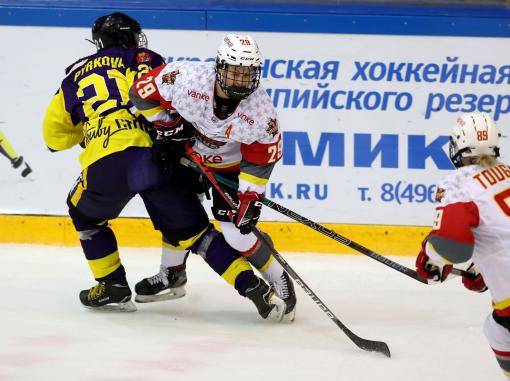 The KRS Vanke Rays matched their biggest ever victory in Russia’s WHL, hammering 7.62 by a 10-1 scoreline in the second of the teams’ back-to-back games. Previously, the Lady Dragons defeated SK Gorny by the same scoreline back on Oct. 23 last year.

Today, Alex Carpenter led the scoring with 2+2, Hannah Miller and Alexandra Vafina had 2+1, Megan Bozek made three assists and Alena Mills joined Vafina in scoring her first for the club.

After an emphatic 8-1 win to start the season yesterday, the Rays were ready for a repeat performance in Voskresensk. However, after cruising to victory over 7.62 yesterday, the Rays got a rude awakening at the start of Monday’s game. With just 38 seconds on the clock, the home team took the lead through Polina Kirichenko. It was a blow for Kimberly Newell, given the start in goal ahead of Milena Tretyak and beaten on the first meaningful play of the game.

Provoking a Dragon rarely ends well, and that impertinent start from the opposition drew a fiery response. The depth of the Vanke Rays offense is well known, and the point was ably demonstrated with three goals in four minutes. Alex Carpenter scored the first, forcing home a feed from Bozek as our forwards sliced through the home D. Then Carpy turned provider as Vafina potted her first since joining the Lady Dragons. Kaitlin Tse followed that with her first of the season, placing a looping shot beyond Sofya Larova after good work behind the net from Leah Lum.

With a commanding 3-1 advantage, the Rays were able to dictate the play. The first penalty of the game saw our girls on the power play and the familiar combination of Carpenter and Rachel Llanes delivered a fourth goal and chased Larova from the net. Early in the second, Miller struck on a delayed penalty to make it 5-1 and it was a question of whether we would see a repeat of the scoreline from the previous day. Miller got her second of the game midway through the frame when she arrived at the back post to convert a Kaitlyn Tougas pass after more impressive work from Bozek. It was increasingly clear that when Bozek got the puck, 7.62 struggled to get it off her and late in the middle frame another power play presented the American defender with another chance to go on the offensive. This time she picked out Carpenter at the back door for a routine finish.

Next came Alena Mills, redirecting a Vafina shot from the right-hand dot to make it 8-1. That was Mills’ first goal for her new club and it brought up a repeat of Sunday’s scoreline with more than 20 minutes left to play. Unusually, 7.62 responded by reversing its earlier goalie swap: out went Veronika Kommissarova, back in came Larova.

The third period brought two more goals. Lindsay Agnew scored #9 with a powerful shot from the deep slot then Vafina got her second of the night on the power play to bring up double figures. Two games into the new season and the WHL’s defending champion already looks impressive. Two games, two wins and a goal difference of 18-2. The rest of the league has been warned.