Our latest home stand brings some of the top names in Russian hockey to Mytishchi to take on the Dragons. Between them, Salavat Yulaev, Metallurg and CSKA have won four Gagarin Cups and all three of them are pushing at the top end of the table this season. There’s also a visit from Torpedo, back in the Eastern Conference this season and proving to be an unpredictable but dangerous opponent. As our roster slowly gains strength, the upcoming games offer a great chance to see how much progress we’ve made since the start of the season. 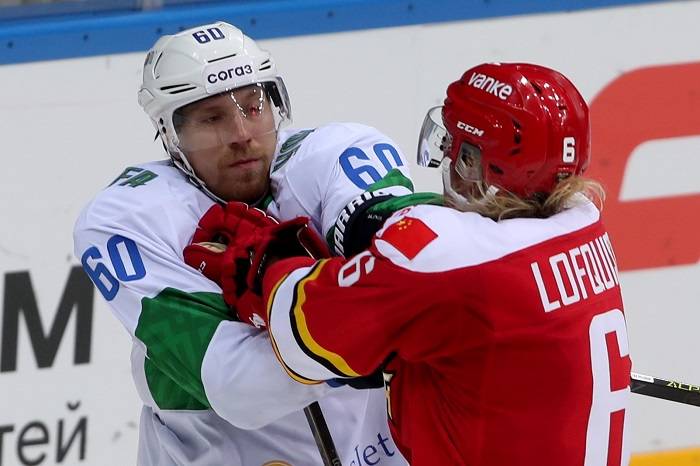 Last time out: So far, Salavat Yulaev is the only team that failed to beat Red Star in regulation. Spencer Foo’s first goal of the season gave us a first-period lead and he also had an assist when Ivan Nikolishin made it 2-2 midway through the second. After battling to a tie against a powerful opponent – helped by 52 saves from Dmitry Shikin – we lost out to Dmitry Kugryshev’s goal in the shoot-out.

Familiar faces: Forward Alexei Kruchinin finished last season in Ufa after leaving Traktor when it was clear the Chelyabinsk team was unlikely to make the playoffs.

Background: It’s been an interesting few weeks in Ufa since we last met Salavat Yulaev. Like so many teams in the KHL – your Dragons included – the team has been affected by the virus. Head Tomi Lamsa had to miss a few games, as did his Finnish stars Juha Metsola, Sakari Manninen, Markus Granlund and Teemu Hartikainen. Three of them returned for the most recent game but couldn’t escape an overtime loss to Barys. However, Salavat’s youngsters have stepped up – often with eye-catching results. Rodion Amirov, a super-skilled forward of immense potential, was rewarded for his growing maturity with a role on the first line. Defenseman Shakir Mukhamadullin leads the team in scoring from the blue line. Both were chosen in the first round of last week’s NHL draft. And Mikhail Vorobyov, 23, shrugged off a slow start on his return from North America. He’s got 5 (3+2) points in his last five games, even though his team lost three of them.

Last season: Our last visit to Nizhny Novgorod brought a victory, with goals from Andrew Miller and Cory Kane securing a 2-1 verdict on Oct. 31. That was our first ever win against Torpedo, and it came just 10 days after a 2-7 reverse against the same opponent on home ice.

Familiar faces: Several of our summer recruits had past experience with Torpedo. However, of that crop of players, only defenseman Viktor Baldayev – who had seven appearances in 2017/18 – is in contention to feature in this game.

Background: Torpedo’s form this season is something of a mystery. At its best, this team can match anyone in the KHL – witness the 4-2 win against Ak Bars at the end of September. However, on a bad day, David Nemirovsky’s men can drop points against any opponent, as shown in defeat at Amur on Oct. 6. Damir Zhafyarov remains the big offensive threat: his two goals against Sibir took him top of the team’s scoring with 12 (5+7) points this season and brought up 150 points in his KHL career. Summer signing Chris Wideman, a veteran of almost 200 NHL games, is the top-scoring defenseman with 10 (4+6) points and a big role on the Torpedo power play.

Last time out: We began our season with a trip to Magnitogorsk and defied the doom-mongers with a hard-working performance against one of the Eastern Conference’s top teams. A hard-working display – including 23 blocked shots – kept this game competitive until the very end before Metallurg escaped with a 2-1 win.

Familiar faces: Denis Osipov has fond memories of his spell in Magnitogorsk – during his brief time in the Urals, he was part of the roster that lifted the 2016 Gagarin Cup under the guidance of Ilya Vorobyov. Taylor Beck made his Metallurg debut against us in our first game of the season, picking up an assist against his former club.

Background: In the past, games against Metallurg have been all about Sergei Mozyakin. The KHL’s record-breaking forward has 15 (6+9) career points against us; like most teams in this league, we’ve found it hard to handle Magnitogorsk’s captain. Now, though, things are changing. Mozyakin remains a classy forward, but this season the team has a new fulcrum. Summer signings Sergei Plotnikov and Maxim Karpov lead the scoring, Yegor Yakovlev is making a handy contribution from the blue line and Finnish imports Juho Lammikko and Harri Pesonen are steadily settling in at their new club. It’s a regeneration that seems to be bearing fruit for Magnitka: the team is handily placed among the top clubs in the East as the first quarter of the season comes to an end.

Last season: Historically, CSKA has been a tough opponent for us and last season was no different. Both games finished as 0-3 losses. Indeed, our last goal against the Army Men was back on Oct. 16, 2018 when Olli Palola potted the winner in our only victory against a CSKA team on the way to its first ever Gagarin Cup win. Just over two years on, is it time for a new hero to bring the Dragons a famous triumph?

Familiar faces: Ivan Nikolishin began his career in the CSKA academy and played in the MHL and VHL with teams in the Army system. However, he never got a chance with the club in the KHL.

Background: At the time of writing, the two teams had an identical result in their previous game: CSKA lost 4-6 at Metallurg, while Red Star went down by the same margin at Spartak. That’s pretty much the end of the similarities this season, though. For the Army Men, that was the end of a seven-game winning run that saw them march to the top of the table. Our position is rather less exalted with a team learning fast but still having much to do to turn potential into points. CSKA underwent a refit in the summer, losing the likes of Kirill Kaprizov, Nikita Nesterov and Ilya Sorokin, but the team remains as strong as ever. If there is a question mark, it might be over Alexander Sharychenkov’s goaltending, but on the early evidence this season we can expect the 2019 Gagarin Cup winner to be firmly in the mix for honors again this year.