Denied by a super save 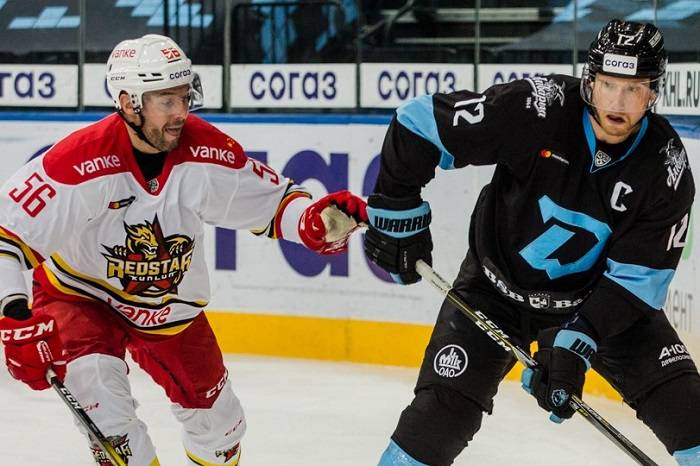 Another day, another new signing. And, on this occasion, an old friend back at the club. Cory Kane is back in the Dragons’ Lair for a fourth season with the club. Currently third on Red Star’s all-time appearance list, the popular center immediately donned the ‘A’ and slotted into the team for the trip to Minsk.

Ironically, Kane’s arrival meant there was no homecoming for our Belarusian international Alexander Kitarov, who made way to accommodate him. Another ex-Dinamo man, Denis Osipov, also dropped out of the team due to injury to be replaced by Mikhail Sidorov. Dmitry Shikin took over from Simon Hrubec in goal.

Our Belarusian opponent began the season in free-scoring form. By the time Craig Woodcroft’s team reached third place in the West, it was the highest-scoring in the KHL – and one of the leakiest defenses. True, the Bison slowed their pace a little lately, losing two on the spin, but it was clear that task number one for Red Star was to keep the game tight and restrict scoring opportunities. A goalless first period was evidence that the message got through, even if there is still a need for more offensive options on our side.

One thing we don’t lack is heart. When Viktor Baldayev took exception to Dmitry Znakharenko’s game early in the second period, our tall defenseman wasn’t afraid to hammer home the point physically. A flurry of blows left his opponent reeling although, to Znakharenko’s credit, he hung on manfully before the officials halted the sparring and sent both men to cool off in the sin bin.

While they were watching on, Dinamo opened the scoring with precisely the kind of passing move that we were trying to suppress. Rob Klinkhammer dropped the puck for Dmitry Buinitsky, whose pass to the back door was tucked away by Vladislav Morozov. It felt like it came from the coach’s playbook but – small progress – it was the latest we conceded a first goal in any game this season.

Shikin was heavily involved in the next big incident seconds into the final frame. Francis Pare broke through our defenses, avoided a hook from Hunter Shinkaruk and headed for goal, only to be taken out by our on-rushing goalie. Penalty shot was the verdict, a winded Pare went to the sidelines and Shikin did enough to force Alexander Kogalev to shoot wide of the target. Shinkaruk had a minor penalty to sit, but the PK kept the score at 0-1.

It took a wonder save to deny Red Star an equalizer in the 45th minute. The puck thudded off the boards and dropped for Ethan Werek with the net gaping at his mercy. Danny Taylor seemed to be out of the picture and our forward, understandably, was already celebrating after he fired in a shot. But Taylor produced an astonishing, full-stretch reaction stop to rob our man; worse still for Ethan, it’s a moment likely to feature on highlight reels from now until the end of the season.

The game remained tense. Dinamo thought it had a vital second goal when Ivan Drozdov won the puck on the boards and fired in a shot that rebounded for Yegor Sharangovich to stuff home. However, the video showed that the Dinamo man used his skate to beat Shikin and it stayed at 1-0. The game could still be saved and Shikin left his net with 90 seconds to play, maximizing our attacking potential at the last. Sadly, it didn’t quite work out. Dinamo got the break and Igor Martynov was awarded an empty net goal. He didn’t get the puck into the net, but was fouled as he headed for the unguarded target and, in lieu of a penalty shot, the goal was awarded at once. And thus, a brave effort came up just short after a competitive performance.