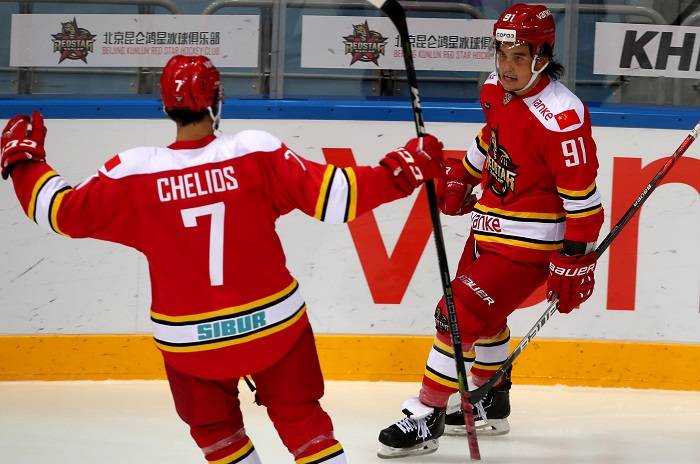 It was a day that started with great news. Four players – count ‘em – rejoined the team, moving our roster ever closer to full strength. Tyler Wong and Trevor Murphy led the way, scoring leaders on attack and defense last season, and we also welcomed back Jason Fram and Josh Nicholls, two of our Chinese heritage guys.

The additions of Trevor and Jason meant we could name seven defensemen for the game against Neftekhimik. Tyler and Josh also made the team after a whirlwind of travel and paperwork had them registered and ready to go.

Our goalie, Simon Hrubec, got a thumbs-up as well. His skate save to deny Corban Knight last time out was picked as the KHL’s best of the week. And no wonder, it was so good even the referee needed to go watch it again, just to make sure.

There were things to enjoy on the ice as well. Wong, who potted 15 goals and 16 assists to lead our offense alongside Brandon Yip last season, was quickly back doing what he does best. Two goals for the 24-year-old highlighted just why the management was so keen to get him back at the club. It’s not just good news for Red Star, it’s potentially a big boost for China: a second season with Red Star should mean Tyler is eligible to play for his ancestral homeland at the Beijing Olympics.

Before that, though, there’s a job to do here. It’s easy to look at results like this, without any context, and feel that this is a season of painfully few positives. After all, Neftekhimik is a club that has been struggling – both for fitness and results – in the opening month of the season. But, with all due respect to our opponent’s very real problems, Vyacheslav Butsayev’s team has not faced the kind of disruption Red Star has endured. With all the rapid changes to the roster, the team on the ice tonight was effectively at the beginning of its pre-season. Neftekhimik, like everyone else in the KHL, is a month into competitive action. That kind of sharpness, that kind of on-ice rapport makes a difference that is tough to overcome.

It certainly made a difference in the early stages of this game. Neftekhimik jumped to a 2-0 lead inside seven minutes and added a third at the start of the second period. But Wong got us on the scoreboard, and the team’s belief started to surge back. When Alexander Kucheryavenko made it 4-1 to the visitor, it was less an assertion of his team’s dominance and more a last hurrah as the pattern of play turned in our direction. Wong got his second just before the break and in the third period we saw Gleb Zyryanov score his first for the team to make it a one-goal game. The fightback was well and truly on but – this time – destined to fall just short.