After the confusion around Lokomotiv and ‘the game that never was’, it’s great to get back into action. We have two upcoming games in the Moscow Region to finish our September program. First, there’s a short trip to Avangard on Friday. Then, next week, we entertain Neftekhimik at Arena Mytishchi. 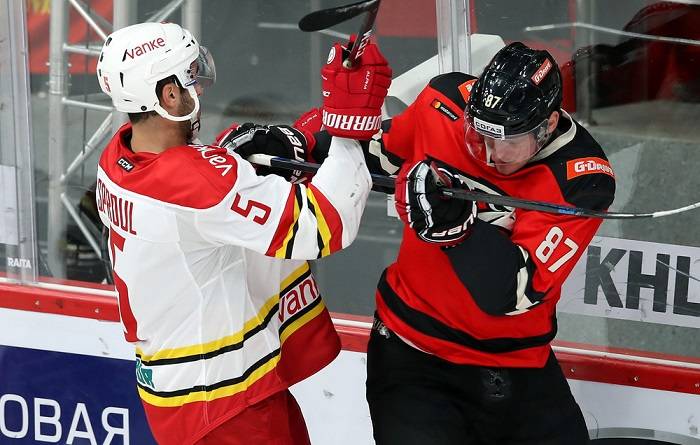 Our four games against Avangard produced two wins and two losses. Last September saw a 2-5 loss in Balashikha but the following month we returned to the Hawks’ nest and won 3-0 in one of the best performances in our club’s history. Two goals from Jason Fram and 34 saves from Jeremy Smith caught the headlines that evening. At home, we met twice in three days. First, we suffered a shoot-out loss but bounced back to back a 3-2 overtime win thanks to Trevor Murphy’s goal. That meant that after losing our first games against Avangard, Red Star improved to take the verdict in the three of the last five encounters.

Only one player has played for both teams – our defenseman Oleg Piganovich spent the latter half of the 2012/13 season in Omsk.

The last team to lose a game this season faces the last team to win one – and after a victory by default against Lokomotiv, the Dragons are eager to get a win on the ice. However, it’s worth keeping in mind that, for our club, simply being on the ice is a success in itself. The problems facing KRS since the start of the coronavirus pandemic are well documented but through all of those challenges – relocation, rebuilding a roster, illness affecting the squad – the guys have kept going. The joy of playing the game keeps the team motivated, regardless of how tough things get. Friday’s game against Avangard is likely to be another big test. The Hawks are currently top of the KHL table – tied on 14 points with Avtomobilist and Ak Bars – and have six wins from their first nine games. Reid Boucher made a fast start to life at his new club, but in recent games Alexander Khokhlachyov and Alexei Emelin have led the scoring for Bob Hartley’s team.

Neftekhimik was our favorite opponent last term, and the Dragons won all four games between the teams. Not that it was easy. Far from it, two of the games went to overtime and the biggest margin was a 2-0 victory in Tatarstan in November with the goals coming in the third period. A big part of last season’s success was down to Andrew Miller, who had 6 (2+4) points in four games against Neftekhimik.

Neftekhimik’s season has had much in common with ours. Illness has hampered the team’s progress, victories have been hard to come by and it was only a shoot-out win over fellow struggler Amur that lifted Vyacheslav Butsayev’s team off the foot of the KHL table in its last game. But that hasn’t stopped captain Alexander Kucheryavenko enjoying a good season. At the time of writing he has 6 (5+1) points from seven games and only failed to produce something in the 0-6 loss to Jokerit. The pressure is very much on him and his team-mates to spearhead an improvement that can get Neftekhimik pushing for a playoff place, so we can expect a highly-motivated opponent to arrive in Mytishchi next week.