Kristo starts with a double 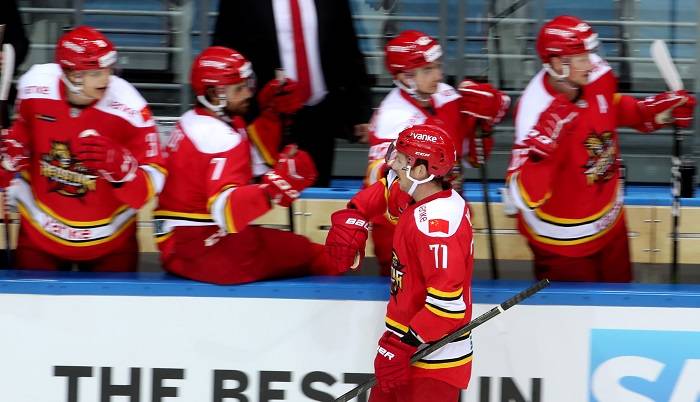 Danny Kristo scored two goals on his Red Star debut as long-awaited reinforcements finally arrived. But, despite the new faces, our first home game ended in a loss as Avtomobilist skated to a 5-2 win.

It was a new look Red Star team for this one, with a flock of new Dragons signed up and ready to play as we settled into our new home in Mytishchi. Goalie Simon Hrubec was back between the piping, Jake Chelios, Andrej Sustr and Sam Lofquist were back on defense and we had a new forward line. Our strike combination was led by captain Casey Wellman, supported by Hunter Shinkaruk and Danny Kristo, while there were returns to the colors for David Bondra, Ethan Werek and Gunars Skvorcovs. Alex Riche, whose rookie year at the club was wrecked by injury, also got his first start for Red Star.

There was also a change behind the bench. Alexei Kovalev had to miss today’s game due to illness, so Igor Ulanov stepped up to serve as head coach in the boss’s absence.

Our new faces brought an immediate injection of positivity. Just a couple of minutes into the game, Kristo opened the scoring with a power play goal. The speedy American has previous in the KHL – he played for Dinamo Riga in 2017/18, scoring 21 (8+13) points in 42 games. After that he had a short spell in Sweden then moved on to Switzerland, joining us from Rapperswill-Jona. Lofquist had an assist on the play, the U.S. born defenseman picking up where he left off in his short but productive spell with us in 2019.

Given the result when we played in Yekaterinburg just a few days ago, grabbing the opening goal was a vital boost for the team. A combination of fresh faces and an early lead gave a belief that our early-season problems might be coming to an end. But Avtomobilist is not ranked among the Eastern Conference leaders by accident. Bill Peters has a good team at his disposal and the visitor proved it when it tied the game through Anatoly Golyshev when it got a power play of its own.

Matters got worse either side of the first intermission, with Pavel Datsyuk putting the Motormen in front just before the break, then setting up Golyshev for another power play goal shortly after. But Kristo wasn’t giving up on this game without a fight, and he got a second goal on his debut midway through the second period as we converted our second power play of the night. This time the assists came from Werek and Shinkaruk, both of whom are back with the club after playing for us last season.

However, Kristo’s eye-catching debut was not enough. Avtomobilist restored a two-goal lead early in the third period – the video judge ruling that Denis Bodrov’s shot hit the bar and dropped behind the goalline – and that was too much for our guys to recover. Another power play tally, this time from Geoff Platt, gave the scoreline an unflattering look: in truth, Kunlun deserved better than a 2-5 margin.