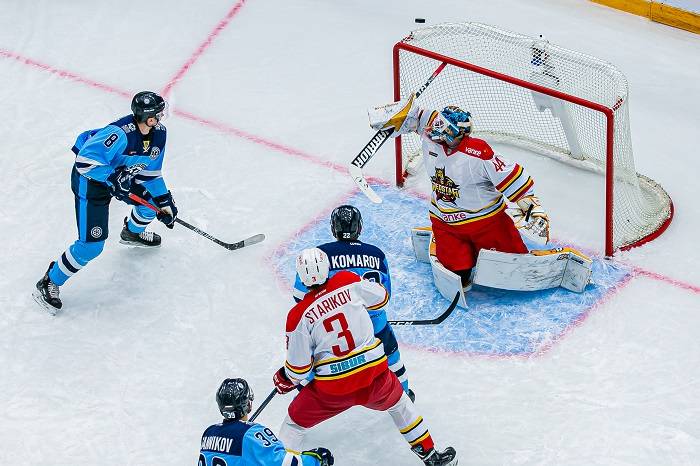 Our last road game brought a reunion of old team-mates. When our head coach Alexei Kovalev captained team Russia at the 2005 World Championship and the 2006 Olympics, one of the brightest prospects on the roster was a promising young forward by the name of Alexander Ovechkin. You all know what happened to him – a stellar NHL career with the Capitals, leading the Washington franchise to its first Stanley Cup. He was the VIP guest in Novosibirsk, visiting Sibir’s academy and catching up with his former captain in Kovy’s new role.

It’s fair to say that a forward of the Great 8’s caliber would transform the Dragons’ current roster – and most others in contemporary hockey. Our games so far have produced plenty of hard work, but without a reliable goalscorer it is always hard to win hockey games and a return of four goals in four outings tells its own story. But there are signs of salvation. German Shaporev, who was still in kindergarten when Kovy and Ovi first teamed up for the Red Machine, got his second goal in two games for Red Star. There was even a hint of Ovechkin’s trademark wrist shot, a one-timer wired in from the face-off dot after Sergei Monakhov supplied the feed. Harri Sateri in the home goal was nowhere near it, lured to his near post by Monakhov’s rush and leaving far too much of his net exposed for Shaporev to attack.

If comparisons to the game’s top stars are better left for the future, Shaporev’s goal had immediate significance. It was the first time this season that Red Star opened the scoring in a game, indeed the first time that the Dragons held a lead in KHL action since Feb. 15, when a double burst midway through our game at Traktor gave a short-lived 2-1 lead. As hard as this opening road trip is, it’s impressive that each game – with the exception of the heavy loss in Yekaterinburg – has brought incremental improvements in performance.

Late in the game, Shaporev struck again, claiming his third of the season and becoming the first of our players to score two in a game in 2020/21. That’s another of those incremental improvements; as a team, and individually, the Dragons are posing more of a goal threat with each passing game.

However, it’s still a work in progress. With five to play in the middle frame, Denis Osipov was on the wrong end of a borderline handling the puck call and Sibir tied the game on the power play thanks to a thunderbolt from Yefim Gurkin. Red Star responded bravely, with Andrei Maximov going close to restoring our lead, but there was worse to follow late in the period when Konstantin Alexeyev’s shot got tangled up in a flurry of skates and Viktor Komarov got the lucky bounce before smashing the puck home from close range.

Into the third period with the game to save, the Dragons encountered another of the big problems affecting the team this season: fatigue. For the second game in a row, we were shortbenched, running with just 17 skaters and, in effect, restricted to three-line hockey. To make matters worse, Dmitry Megalinsky did not return to the game after the first period, reducing us to just five D-men. But adversity didn’t prevent the team from starting on the front foot and tying the scores. Ivan Nikolishin was the scorer, shooting home his second of the season after Dmitry Arkhipov’s puck handling wrongfooted everyone.

Sibir hit back with a power play goal after Alexei Kruchinin sat for delaying the game, but our forward quickly made amends with a PP tally of his own to tie it up again at 3-3. Kruchinin’s solo effort, over Sateri’s glove, was his first of the season and brought up another Red Star landmark – our first 3-goal game this season.

Unfortunately, not even that was enough to secure our first points of the campaign. Staying out of the box was a problem throughout the evening and the home team took advantage when Daniil Romantsev stuffed home yet another power play goal to make it 3-4 with 10 to play. A fifth soon followed, Vladimir Pervushin leaving us with too much to do in the closing stages despite Shaporev’s second keeping the game alive until the very end.