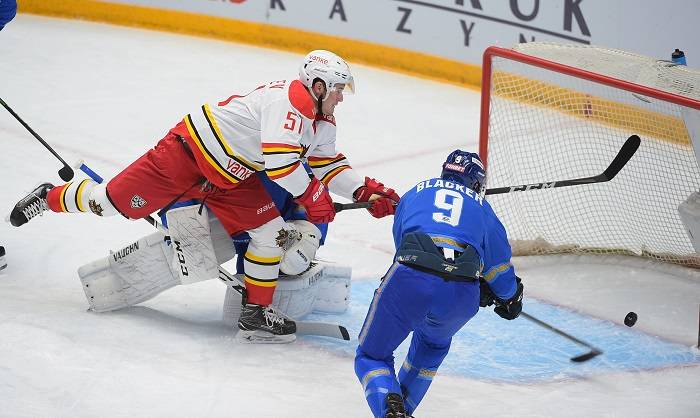 Our trip to Kazakhstan was an odd affair. It was the first home game of the season for Barys and, in accordance with local legislation, it had to be played behind closed doors. The Barys Arena, opened in 2015, normally holds nearly 12,000 fans but yesterday it felt like a cavernous empty space as the teams were greeted by row upon empty row of seats. The music was playing, but usual hubbub of crowd noise was gone: instead, the shouts of the players reverberated around the rink and the rumble of skate over ice was clearly audible.

Into this strange atmosphere, the Dragons introduced a new face. Nikita Penzov joined the forward line for the first time. The 22-year-old grew up in the Moscow Region, hailing from the old monastery town of Sergeyev Posad, not far north of our new home in Mytishchi. His playing career, though, has involved plenty of travel. He had a couple of seasons in junior hockey in the USA before a short spell with Slovenia’s HK Celje in 2018/19.

With no spectators, initially there were no announcements during the game. Fans of a philosophical bent might ponder whether, if the puck hits the net and nobody is there to call the play, is it still a goal? Unfortunately, Red Star quickly found that the answer was ‘yes’. After four minutes of play, Viktor Svedberg fired home a point shot from a Matt Frattin feed to open the scoring.

Given our lack of goalscoring prowess so far this season, it would be easy for heads to drop at 0-1. But the Dragons stuck at their task, helped by a couple of power plays, and looked capable of getting back into the game. Barys was unable to dictate the play in the manner it hoped, and Red Star was close to tying the scores when Alexei Kruchinin got clear of the home defense and found himself face-to-face with Joni Ortio in the Barys net. Kruchinin looked to go top shelf but could only find the glove. Ortio wasn’t the only goalie stonewalling breakaway chances; our own Dmitry Shikin did his job when Nikita Mikhailis had a similar opportunity for Barys.

If there was encouragement from the first period, the second began with the huge boost of a tying goal. Not only was it the first time Red Star had scored at equal strength this season, it was also the first goal that fundamentally affected the course of the game (our two previous tallies both came in the last second of defeats). German Shaporev, our young forward, got his first goal for the club when he fired home a feed from Sergei Monakhov to tie the game 85 seconds after the restart. The roars of triumph from our bench more than compensated for the silence around the arena.

Unfortunately, the team never got a chance to consolidate after levelling the scores. A penalty on Yegor Dugin gave Barys its first power play of the game and, after an almighty scramble on the crease, Jakob Lilja stuffed home his first goal in the KHL to restore the home team’s lead. Having recovered one deficit, the Dragons had to do it all over again.

However, that task proved a little too much. Lilja turned provider in the third, assisting as Nikita Mikhailis made it 3-1. Then the game got bogged down in a string of penalties before, back at full strength, Denis Osipov pulled a goal back off a great pass from Kruchinin and, with six minutes left, the game was alive once again. But for all our best efforts, including a huge scramble in front of Ortio’s net in the last minute, when we went with an extra skater and tried to force another late goal, there was no reward for a greatly improved performance.