Looking for a reaction

The first three games of Red Star’s season did not go according to plan. Even though everyone understands that this campaign will be unusually difficult, losing those three was hard to take. And while there were promising signs in the first two games, with some well-organized defense making life difficult for Metallurg and Traktor, there was no consolation to take from the heavy defeat at Avtomobilist. But the games still come thick and fast, giving us every chance to apply the lessons of those first encounters as we wrap up the opening road trip in Nur-Sultan and Novosibirsk. 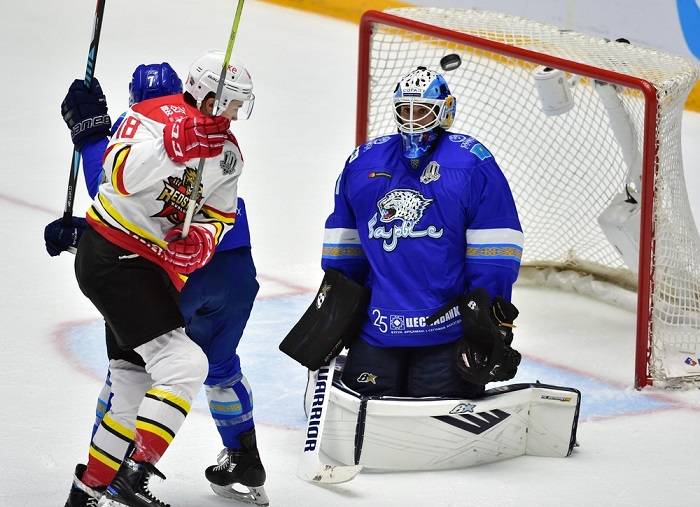 Last season: We shared two wins and two losses in our four games with the pride of Kazakhstan. Barys came to Shenzhen early in the season and lost 1-0 to Ethan Werek’s first goal for the club before recovering to take a 3-2 verdict the following day. At the end of September, we enjoyed a 5-2 triumph in Nur-Sultan as Trevor Murphy scored his first in a Red Star jersey. But our final game of 2019 ended in a 1-2 reverse on the steppes of Central Asia.

Familiar faces: When Jesse Blacker played on our defense in season two, he was a Canadian import. Today, he’s a naturalized Kazakh with international appearances for his adopted country. He’s starting his third season in Nur-Sultan. Sweden’s Linus Videll was part of the Dragons’ first season and was our most productive forward in the team’s only playoff campaign to date. Our roster currently has no former Barys players, but young German Shaporev played in Kazakhstan with the Torpedo organization before coming to us on a try-out.

Preview: Barys goes into its first home game of the season after losing two of its three road games. An opening win at Dinamo Riga was followed by a loss in overtime in Minsk and a 1-3 defeat at the hands of CSKA. Last season was a good one, with the Kazakh club easily overcoming Metallurg in the opening round of the playoffs following a strong regular season. But the national team’s failure to progress in Olympic Qualification meant a change in coaching for club and country, and Yury Mikhailis, a man with huge experience in Kazakh hockey, is now behind the bench.

Due to coronavirus restrictions in Kazakhstan, this game is due to be played without spectators.

Last season: Three of our four meetings with Sibir last season were tight affairs. Twice we lost in a shoot-out and on a third occasion the Dragons were beaten in a one-goal game. But the biggest win of the four went our way: a 3-0 success for us on the road on Feb. 11. Tyler Wong, Brandon Yip and Devante Smith-Pelly got the goals, Simon Hrubec had the shut-out.

Familiar faces: Four of our players have spent time with Sibir. Defensemen Sergei Gimayev and Oleg Piganovich had solid spells in Novosibirsk, but forwards Gleb Zyryanov and Yegor Dugin may well feel that have a point to prove against their former employer.

Preview: Our opening road trip comes to an end in Novosibirsk, the venue of Red Star’s last ‘home’ game. That match-up with Dinamo Riga was re-arranged due to the pandemic and since then, as we know, there have been big changes in the way our club will operate. Sibir, meanwhile, escaped significant changes in the summer. The return of popular forward Stepan Sannikov and the arrival of Eric O’Dell to replace departing Finn Jukka Peltola were the only changes of note. But Nikolai Zavarukhin’s team has suffered at the start of the season, losing its first three games. Avangard, Torpedo and Severstal all defeated Sibir in its opening road trip; will familiar surroundings give the Siberians a lift?