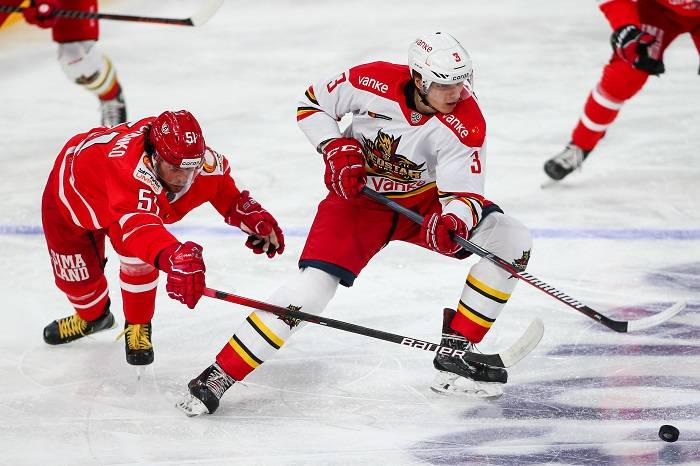 The form table could not have been more contrasted: Avtomobilist had two wins from two games, Red Star two losses from two. But the Dragons have been here before. Last season we came to Yekaterinburg to play an unbeaten Avto and pushed the Motormen all the way in a 4-4 tie before losing out in the extras.

This year, hoping to repeat that kind of performance and get points on the board at last, Alexei Kovalev made a couple of changes to the team that lost in Chelyabinsk. Alexander Lazushin replaced Dmitry Shikin in goal, making his first start since rejoining the club this summer. Youngster German Shaporev made his second appearance for the team and was promoted to the third line for this game. However, we were without the experience of Anton Glinkin and Ilya Krikunov up front for this game. For Krikunov, that meant missing a visit to one of his former clubs.

One of our team’s biggest problems this season has been creating offense. In Yekaterinburg, with had a golden opportunity early in the game when Nikita Tryamkin sat for tripping, but the two-minute power play generated little threat for Jakub Kovar in the home net. Perhaps the creativity that Krikunov can bring might have made a difference but, on this occasion, it was not to be.

And, once the teams were back at full strength, it wasn’t long before the Motormen pulled ahead. First, Peter Holland found it a bit too easy to get right around the back of Lazushin’s net before picking out a pass for Georgy Belousov in space at the back door. Moments later and again there was a lack of white jerseys behind the goal as Dan Sexton fed Chay Genoway for the second goal of the game.

Adding insult to injury, Ruslan Pedan’s misplaced pass out of his own zone went straight to Pavel Datsyuk. The Magic Man is probably the last player any team in the KHL wants to invite on an unimpeded rush to the net, and the veteran showed exactly why as he beat Lazushin for his first goal of the current season.

That was the last meaningful action of the first period, but the middle frame did not get much better. Midway through, the lively Sexton threatened our goal again and Alexei Makeyev was the beneficiary as he potted the loose puck. Then, late in the play, we were hit with a goal on our own power play. Vyacheslav Litovchenko intercepted the puck and advanced to score. Our bench thought that Pavel Kulikov had strayed offside in the build-up, but the video review awarded the goal and cost us a two-minute bench minor.

There was nothing to celebrate in the third either. Sexton got a goal to add to his pair of assists, Andrei Obidin made it 7-0 and that was how it finished. The seven-goal margin equals Red Star’s heaviest KHL loss. Previously the team went down 1-8 to SKA in November 2017.