Yet another late strike 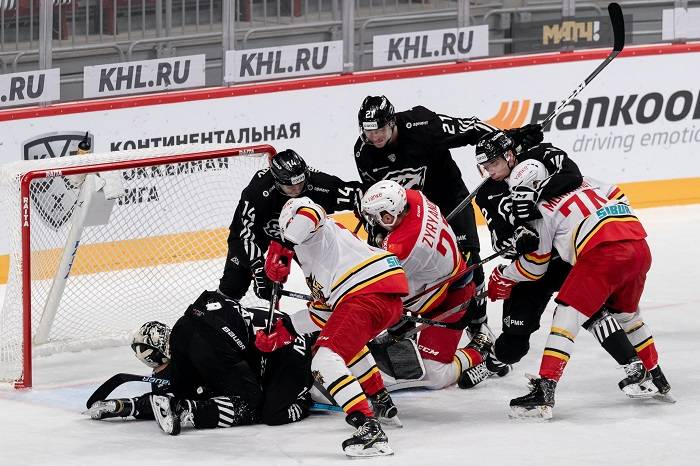 Game two of the season saw the Dragons make the short journey from Magnitogorsk to Chelyabinsk to face Traktor. After a battling defeat against Metallurg in our opening fixture, there were few changes to the roster. However, there was a new face among the forwards – German Shaporev.

The 20-year-old learned his hockey with Avangard before moving to the Torpedo organization in Ust-Kamenogorsk, Kazakhstan, to further his development. The switch paid off: last season he blitzed the MHL, scoring 72 (39+33) points in 53 games for Altai, the junior team. He also got his first taste of adult hockey in the VHL and, more notably, at the KHL All-Star Game. After impressing among the junior All-Stars in Moscow, Shaporev was invited to stay as one of the four rising stars playing with the KHL’s crème-de-la-crème. And, for a young forward, what better experience than linking up with Team Bobrov and getting a close look at the likes of Vadim Shipachyov and Dmitrij Jaskin, two of the KHL’s top scorers last term?

Now Shaporev is on a try-out contract with Red Star and today represented his KHL debut. Listed as the 13th forward, he had little time on the ice in Chelyabinsk, but announced his presence with a trio of hits when he was unleashed in the third period.

As for the game itself, the first period quickly settled into a familiar pattern. The Dragons were well-drilled and defensively organized, largely keeping Traktor’s offense to the outside. However, the transition from defense to offense is still a work in progress for our guys, and that was reflected in the possession stats, which gave the home team a clear advantage.

Despite that, it was a one-goal game at the first intermission, with Traktor opening the scoring in the 13th minute from a 5-on-3 situation. Swedish defenseman Lawrence Pilut fired the puck from the point, Dmitry Shikin got behind the initial attempt, but Alexei Byvaltsev quickly steered the rebound to Sergei Kalinin and the Chelyabinsk captain was presented with an open goal.

Late in the opening frame, we saw more evidence of Red Star as an attacking force. The home team encountered penalty trouble of its own and two former Traktor players, Anton Glinkin and Alexei Kruchinin, went close with a couple of one-timers. However, home goalie Roman Will, making his KHL debut after a summer move from Orebro, was equal to the chance.

The Czech stopper was also alert in the early moments of the second, smothering the puck after Lev Starikov’s point shot threatened to drop fall to a dangerously-placed forward. At the other end, though, Traktor went close went Alexander Sharov hit the post.

Then came the second goal of the game, and the first that Red Star has allowed during equal strength play this season. Oleg Yevenko’s point shot bounced around the crease and Anton Lazarev squeezed it home from a tight angle. From that point on, it was always going to be an uphill struggle. And things got worse before they got better, with Vitaly Kravtsov – KHL rookie of the year in 2018 – getting his first goal since returning to Chelyabinsk on loan from the New York Rangers. That made it 3-0 at the start of the third and killed off hopes of a Red Star fightback.

However, just as in Friday’s game, there was a last-second reward for our team’s work. Once again, late in the game, the Dragons grabbed a power play goal as consolation for their efforts. Ivan Nikolishin was the scorer, collecting his first for the club and boosting morale as we head to our next game at Avtomobilist.