It’s all change at Kunlun Red Star this summer, with circumstances forcing the club to recruit a whole new roster. So, let’s get to know the guys who will take on Metallurg in our season opener on Friday. We looked at our defense and goalies in part one, now it’s time to start on our forwards – including one of the most experienced players in the KHL and a veteran Belarusian international.

Dmitry Arkhipov joins the club after two years at Sochi. He moved to the Black Sea in 2018 in a deal that sent Pavel Padakin to Ak Bars, and went on to enjoy his most productive year in the KHL in 2018/19, producing 16 (6+10) points in 45 games as he added depth to the Leopards’ roster.

Earlier in his career, Arkhipov developed through the Ak Bars academy and played with Russia’s U18s at their World Championship in 2010. He was with the club when it won the Gagarin Cup in 2018. However, he did not feature in that year’s playoffs and, for most of his KHL career in Kazan, had a limited role on the team.

Anton has played most of his career with his hometown team, Traktor. He worked his way through Chelyabinsk’s impressive academy and established himself as a first-team regular in the club’s first season in the KHL. In the 2010/11 season he earned his first international recognition, playing a handful of Euro Hockey Tour games for Russia, and he was also part of the Chelyabinsk teams that topped the regular season table in 2012 and reached the 2013 Gagarin Cup final.

Later, he played two seasons at Ak Bars – part of the same roster as another new Dragon, Dmitry Arkhipov. He was on the team that won the 2018 Gagarin Cup, though, like Arkhipov, he played little part in the playoffs. After that season he returned to Traktor and wore the ‘A’. Glinkin starts the season 12th on the all-time KHL appearance list among forwards.

Yegor is another Chelyabinsk native – he played with Anton Glinkin on that run to the 2013 final before joining the Dynamo team that won the cup that year – but his career has taken him around several KHL clubs. A hardworking center, his contribution is often more about enabling his team-mates to shine although in 2017/18, his 29-point haul for Torpedo proved that he can be a productive force in the KHL as well.

Last season was a difficult one for Dugin, who struggled to break into the first team at Sochi. However, after dropping into the VHL he responded well, scoring strongly for Ugra and proving that he is still worth a place in the big league.

Alexander is our only non-Russian signing, and our most experienced international player. Hailing from Novopolotsk, Belarus, he has captained his country in U18 and senior World Championship action, most recently leading the team to promotion from Division IA in 2019.

In the KHL, he is closely associated with Dinamo Minsk, where he made his debut in the 2011/12 season after helping Yunost Minsk to three consecutive Belarusian championships and the IIHF Continental Cup. Very much a defensive forward, his work on regaining possession is often more significant than his scoring.

Another vastly experienced player, Vladimir is returning ‘home’ to Moscow Region with the Dragons this season. Born in Elektrostal and developed by Khimik – in Voskrensek then Mytishchi, where he made his KHL debut – Krikunov first enjoyed an established role on a team with Torpedo. His consistent form there across three seasons brought him to the attention of Team Russia, and he twice pulled on the red jersey in international play.

At club level, though, he is most associated with Sochi. In 2014 he joined the fledgling club and established himself as a leader on the team. Top scorer in two of the first three seasons beside the Black Sea, he is still the club’s all-time top scorer with 121 points in 194 games. Last season, he returned to the coast after two years with Avtomobilist and captained the team in the early part of the season before he was traded to Salavat Yulaev.

Alexei grew up among the lakes of Karelia and even played U16 hockey in the Finnish league with RoKi in 2006/07. However, he soon moved to SKA and made his KHL debut there in 2011. That season saw him traded to Lokomotiv as the Yaroslavl club looked to recover following the air disaster, and he captained the reborn team in its VHL campaign.

Krichunin remained at Loko as the team return to the KHL, but it was a 2015 move to Traktor that kickstarted his career. Previously a modest scorer, he reeled off three consecutive 20-point campaigns – plus 13 points in 16 playoff outings as Chelyabinsk got to the Eastern Conference final in 2018. That form brought international recognition and a return to SKA for one season. Last term he divided his time between Traktor and Salavat Yulaev.

Dmitry is a native of Moscow Region. He grew up in Elektrostal and took his first steps towards the KHL when he joined Dynamo’s youth team in Balashikha. His progress towards the big league was steady rather than spectacular: Harijs Vitolins handed him a Dynamo debut in 2014/15, but he remained in the Blue-and-Whites’ system for the next three seasons.

The breakthrough came in 2017 when he starred in Balashikha’s VHL championship campaign. That earned him a slot on the Dynamo team for the following season and he scored his first goals in the KHL. A brief spell at Torpedo was followed by a move to Severstal where, last season, he enjoyed the best results of his career so far. Given a regular slot on the team, Markovin could mature into a significant player. 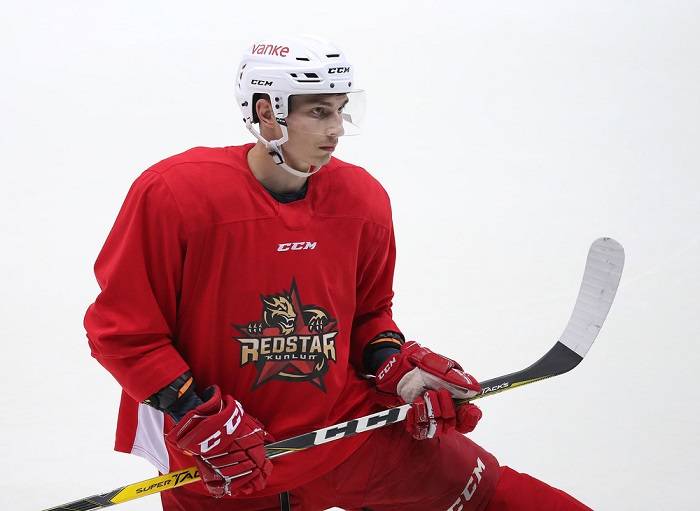 Andrei is a player who has been developing in our VHL teams in recent years and last season he made his KHL debut with two outings under Curt Fraser. Born in St. Petersburg, he learned his hockey within the SKA organization but never made it to the first team.

Instead he scored heavily in junior hockey – averaging 0.82 points per game in three seasons with the Silver Lions. Later he had extensive VHL experience, compiling 130 points in 306 regular season games across eight seasons in the second-tier competition. In pre-season, he showed a touch of flair with his penalty shots and scored on KHL opposition with the Dragons. Now is his chance to stake a claim for a place in the first team.

A left winger, Sergei learned the game within the SKA academy, graduating to make his KHL debut in the 2011/12 campaign. He potted a couple of goals in that season and repeated the feat a year later, but as an emerging youngster he was never able to hold down a regular spot on a stacked roster in Petersburg.

In search of game time, he moved to Severstal, where he spent the next seven seasons. Over time, he became a much-respected part of the club, captaining the team in his final year on the team.

Ivan’s father Andrei is on our coaching staff – but this promising young forward doesn’t need to rely on family ties to get his chance. Moscow-born and trained at the CSKA academy, Nikolshin captained Russia’s U17s in 2012/13. Then he crossed the Atlantic and scored heavily in three seasons of major junior action in the WHL, producing 203 points in 216 games for Everett Silvertips and Red Deer Rebels.

Back in Russia, he returned to CSKA but was unable to work his way into the first team. A move to Severstal secured a KHL debut but again, he found opportunities limited at the highest level. Joining the Dragons gives Ivan an opportunity to cement a role as part of a KHL offense and prove that he can convert that junior promise into senior productivity.

Viktor’s career has seen him play in the USA, Ukraine and Sweden as his hunger for hockey has seen him pick up diverse experience. Along the way, he won a Ukrainian championship with Donbass in 2016 and played for Russia’s U20s in 2014/15.

In Russia, Viktor developed in his native Kazan, where he was coached for a time by his father Alexander at Bars of the JHL. In 2013/14 he had 52 points in 52 games for the youngsters, earning a call to the All-Star Game that year. More recently, he showed strongly on a struggling HC Sarov team in the VHL in 2018/19, earning him a KHL debut with Torpedo last season.

Gleb is a man with a point to prove. The stats don’t paint the true picture of this big winger; he was given limited opportunities during a four-season stint with Sibir and was in and out of the team, usually asked to fulfil a bottom-six role.

Given a run in a team – as at Yermak Angarsk in 2016/17 –he can be a useful contributor. And, standing 195 cm tall and weighing in at 100 kg, Gleb provides an intimidating physical presence on the ice.