It’s all change at Kunlun Red Star this summer, with circumstances forcing the club to recruit a whole new roster. So, let’s get to know the guys who will take on Metallurg in our season opener on Friday. And since every team needs a solid foundation, we’ll start at the back with our goalies and defensemen. 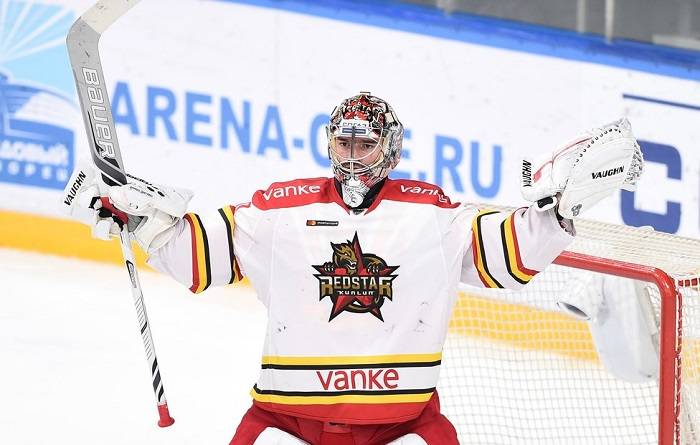 Lazer needs no introduction to Dragons fans, who will remember him fondly from our 2018/19 season. In that campaign, he played 39 games, collecting 12 wins and recording a 91.9% save ratio and a GAA of 2.48. Those are figures comparable with Jeremy Smith’s from last season.

Alexander’s return highlights the depth we have between the piping. At present he is sharing duties with Dmitry Shikin, while Smith and Simon Hrubec are expected to return once the red tape can be resolved. It all adds up to a formidable obstacle for opposing forwards.

A long-serving goalie with Sochi, Dmitry had to battle for game time with former Russia international Konstantin Barulin. Gradually, he ushered the 2012 World Champion to the sidelines, and in the last two seasons he played more than anyone else between the piping.

Another Elektrostal native, like former Sochi team-mate Ilya Krikunov and promising forward Dmitry Markovin, he began with his local team before moving to Amur. In 2011 he backstopped Russia to World Junior gold in Buffalo and later made his KHL debut with SKA. There was also a short spell with Atlant, but it was Sochi where Shikin established himself as a top-level goalie.

It’s back to where it all began for Viktor Baldayev: this defenseman made his KHL debut for Atlant when the club was playing in Mytishchi. He played four teams in the 2014/15 season, a campaign in which he divided his time between a starring role in the Junior Hockey League, a stint in the QMJHL and a call-up for Russia’s Juniors.

Subsequently, Baldayev’s career took him to the Czech Republic, spending time with Karlovy Vary in 2017, as well as three other KHL clubs. But most of his time has been in the VHL, where he was alternate captain with Metallurg Novokuznetsk in 2018/19. Last season, he played 22 games for Severstal.

Experienced defenseman Sergei Gimayev knows his way around the KHL. He’s played in the league since its inception, earning a reputation as a rugged, stay-at-home D-man with an uncompromising attitude.

In the past, his leadership qualities have been noted: Gimayev wore the ‘A’ at Barys and Sibir. His father, also Sergei, was a similarly solid blue-liner, playing for CSKA for several seasons in the Soviet championship. Gimayev senior went on to become a highly respected hockey journalist and commentator.

Dmitry is back in Russian hockey after a year away. This productive defenseman broke into the pro game at Lokomotiv in the Russian Superleague era and won a World Junior silver medal in 2005 as his reputation grew. At that time, he was drafted by the Senators, but remained with Lokomotiv.

He began a long and varied career in the KHL with Vityaz and demonstrated a willingness to get involved in the rough stuff characteristic of that team in the early days of the league. In his first two seasons, he collected 170 PIMs, although he also had his most productive campaign at that time. Later he converted that passion into controlled aggression and played a leadership role as alternate captain at Avtomobilist for three seasons. Last year he had a handful of games in Finland with TUTO.

Denis is one of just two players from last season who is available to start the current campaign. This defenseman made his KHL debut under Oleg Znarok at MVD; his solitary appearance in the league’s inaugural season was a case of ‘before they were famous’, with Znarok still to make his dramatic impact on Russian hockey.

Osipov, too, had to bide his time. Two seasons in the lower divisions went by before a move to Avtomobilist made him a KHL regular for the first time. Later he had a spell at Admiral before joining Metallurg’s cup-winning roster of 2016. He joined us early last season and played 35 games, contributing 3 (1+2) points.

In recent seasons, Red Star has recruited well from college hockey across the Atlantic. Ruslan Pedan is another graduate of that set-up, albeit via a slightly unusual route. Born in Kaunas, Lithuania, Pedan moved to North America with his family ahead of the 2010/11 season. Big brother Andrei, now of Ak Bars, played for Guelp Storm in the OHL while Ruslan began making a name for himself in the NAHL.

Three seasons of college hockey saw him named on the WCHA All-Rookie team in 2014, then the All-Academic team in 2016. Then it was back to Russia, and KHL action. In the last four seasons, Ruslan has divided his time between KHL and VHL action. Is this the season for him to secure a spot on a KHL defense?

Another vastly experienced player, Oleg has compiled over 500 KHL games despite missing the 2016/17 season. Sitting out that campaign did not seem to hamper this defenseman: he returned to enjoy his most productive year, scoring 23 points as captain of Neftekhimik.

He’s often best remembered for his role at Donbass as the Ukrainian team reached the second round of the playoffs in 2014. Many felt the club could have gone further had the crisis in Eastern Ukraine not forced the club to withdraw from the KHL at the end of the campaign. Oleg joins us from Sibir and his know-how on and off the ice should make a big contribution to our new-look team.