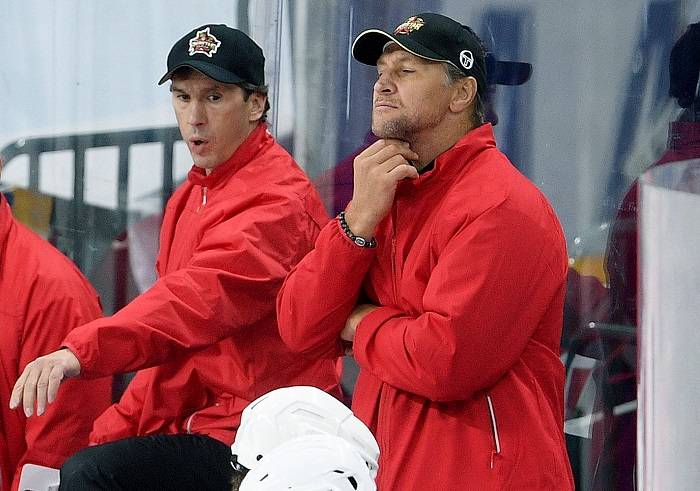 Game three of the Puchkov tournament brought a return for a familiar face – Alex ‘Lazer’ Lazushin was back between the piping for the first time since February 2019. The goalie was a regular in the 2018/19 campaign, posting a 91.9% save ratio across 39 appearances, spent the last campaign at Lokomotiv but was released by the Railwaymen and joined up with Red Star once again on a try-out basis.

Lazushin’s first call to action came early, and in unlikely circumstances. An attempted clearance from behind the net pinged back off Denis Osipov’s skate and the goalie had to be alert to make the stop at the near post. We had seen Torpedo make a fast start in its first game of the tournament, when it jumped to a 2-0 lead over Avangard before losing 2-4 and the first few minutes suggested our opponent was planning something similar here.

However, it wasn’t long before the balance shifted. The first power play of the game didn’t see the Dragons generate much offensive danger, but it shifted the momentum. Soon after the teams were at full strength, Dmitry Markovin had a decent chance but was denied by Nikita Serebryakov. Then our PK got its first test, with Ivan Nikolishin sitting for a minor. Our guys responded to the challenge effectively, belying the lack of preparation time with a well-drilled defensive display to keep the scoresheet blank.

There was another chance for the PK to impress when Dmitry Megalinsky landed a crushing hit on Semyon Kizimov late in the frame. This time Torpedo looked more dangerous, with Damir Zhafyarov causing problems around the net, but the closest we came to a goal was a slapshot from Chris Wideman that lived up to his name and flashed wide.

Early in the second period, Red Star opened the scoring. There seemed to be little danger as Viktor Shakhvorostov broke down the right and fired in a shot that was clearly seen by Serebryakov. But Andrei Kitarov was on hand to cause a disturbance and the next the goalie saw, the puck was in the net. Sadly, the lead was short-lived, with Danil Veryayev quickly tying the game. Then came a full two minutes of 3-on-5 play – a big test for our PK, passed with flying colors.

However, the next outing for our special teams was far less successful. A Red Star power play late in the middle frame could have turned the game in our favor – instead it all went astray. Torpedo grabbed not one but two short-handed goals, with Damir Zhafyarov and Justin Kloos piling up the punishment and moving the game away from our guys.

The third period brought a couple more power play chances for the Dragons, but there was no way through to bring the game back to life. As the frame drew on, Zhafyarov got his second of the game and Daniil Ilyin added a power play marker to take the game away from the Dragons. But there was at least the consolation of a well-taken power play from Anton Glinkin, wiring a wrister past Serebryakov in the closing stages to make the final score 2-5.