The rumors are not always true. After a summer of speculation suggesting that the Dragons would not make it back to the ice, Sunday brought proof that it takes more than a little adversity to shatter our team spirit. Less than two weeks after Red Star was able to assemble a group of players in Mytishchi, the first pre-season scrimmage produced a performance of commendable spirit against our near neighbor in Moscow Region, Vityaz. 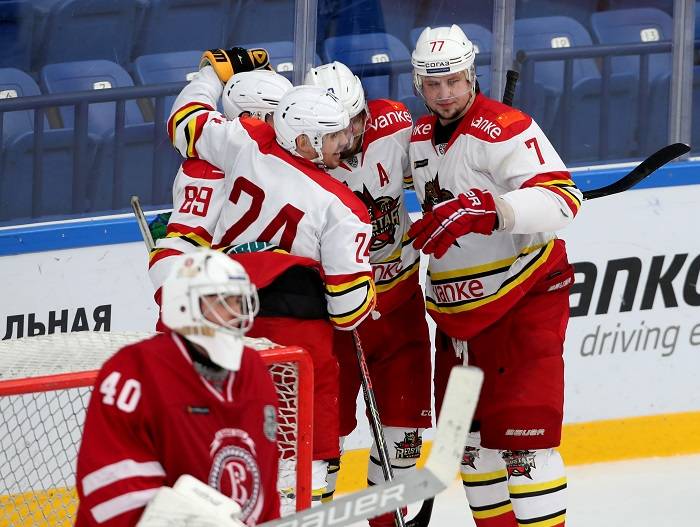 As a chance to test our progress, this was ideal. Historically, our games against Vityaz have been evenly match – the record book shows little between us, either overall or in individual encounters. And with our roster hastily pulled together from players available for selection, the opportunity to take on a team that had already played three pre-season games meant a handy step up in the level of Kunlun’s preparations. Now we could see theory put into practice, getting a better sense of which of our players might be close to earning a long-term contract.

The roster, admittedly, doesn’t feature many familiar names. Or, more accurately, not many who are familiar in our colors. As new head coach Alexei Kovalev sent a team into action for the first time, only two players had previously played for Red Star. Denis Osipov, defenseman, featured last season. Andrei Maximov, forward, made just two appearances in the KHL after featuring more often in the VHL. The rest comprised Russians – evading any work permit problems – looking for a club for the coming season. Some, like goalie Dmitry Shikin, D-men Ruslan Pedan and Oleg Piganovich, or forwards Alexei Kruchinin and Anton Glinkin, bring a wealth of KHL experience. Others, such as Ivan Nikolishin, whose father Andrei is working with the club as a consultant, are looking to forge a future for themselves in the big league after doing their time in the VHL.

Up against a Vityaz team with a solid stock of import talent – KHL veteran Kaspars Daugavins, Liiga leader Justin Danforth and Swedes Mattias Tedenby and Linus Hultstrom – this was always going to be a tough assignment. But from the first action, the Dragons stuck resolutely to the task. The first period finished scoreless, a tribute to impressive goaltending from Shikin, a solid PK and a team learning fast under the guidance of our coaches.

Vityaz did get in front, Danforth scoring early in the second. A further goal from veteran Alexander Syomin midway through the third might have finished many teams. But not our Dragons. The final 10 minutes brought a remarkable turnaround that was just seconds away from grabbing victory. Nikolishin pulled a goal back and when Kruchinin tied it up after 57 minutes, there was everything to play for. In the last minute, Maximov put us 3-2 up: the 28-year-old from Petersburg has been in the organization since 2017 but this was his first goal at this level. Was a remarkable win on the cards?

Sadly not. With nine seconds on the clock, Vityaz snatched an equalizer. Overtime was inconclusive, the shoot-out went to the host. But that should not detract from a brave – and hugely encouraging – effort from our guys. There’s every reason to hope this team will get stronger through pre-season and be in a position to compete when the action starts next month.