In nature, many animals hibernate through the cold winter months. In hockey, the reverse is true, with summer being the down time. But now everything is stirring as the fall approaches and the Dragons’ new season comes into view.

Friday saw the first team meeting of the season in Mytishchi, our temporary new home. The arena, built for the 2007 IIHF World Championship, is just one of the changes enforced on the club by the coronavirus pandemic. Most significantly, there is still uncertainty about when our foreign players will be available. We can’t draw parallels with the situation involving imports at the Russian clubs, because they are working under different migration rules. Instead, we must wait until there is more clarity for our guys. So, for the start of the season, we are putting together a team of Russian players, ensuring no problems with joining the pre-season camp and traveling to games. 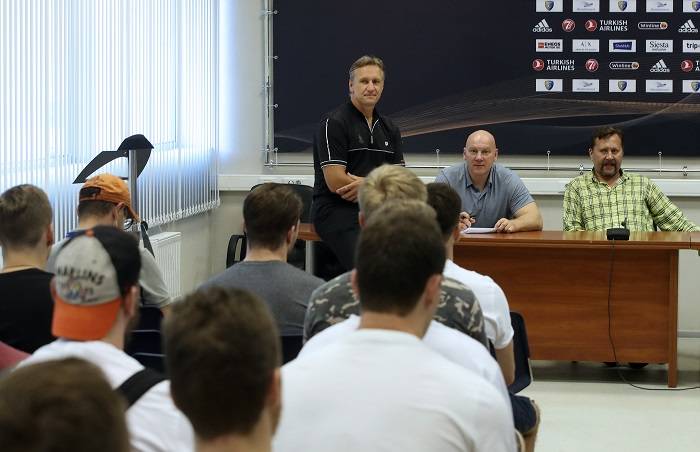 We assembled a squad of 35 players in Mytishchi for the first team meeting. They included some familiar faces: Denis Osipov, Ivan Nalimov, Andrei Maximov have all played for Red Star in the past. There are many other players who will be well-known to hockey fans, but we will introduce them later when all the formalities are complete. In the next few days, everyone will go through the usual medical checks, sign contracts, and register with the KHL. After that, we can get down to work in earnest.

As for those contracts, given the circumstances everyone will get a try-out deal at first. Naturally, head coach Alexei Kovalev was quick to address that situation when he spoke to the team.

“You might think that right now we have two teams: you, and the imports. And that when the overseas players arrive, they will simply replace you all. But that’s not the case. For one thing, we have plenty of free space on the roster. For another, any player who acquits himself well at camp and proves that he is worth a place on the team will get that place. Everything will be decided here and everyone has a chance of remaining on the team. So, get to work, and don’t worry about anything else.”

That means our guys have two weeks to make an impact before we play our first games at the Puchkov Memorial Tournament in Petersburg. Not that it’s an easy task, impressing coaches with the caliber and experience of Kovalev and his assistants Vyacheslav Kozlov and Igor Ulanov. They are joined by consultant Andrei Nikolishin, a quartet of hockey expertise who won’t be hurried into making ill-judged decisions. Our players won’t be able to pull the wool over their eyes: with hawk-like focus, they can spot any shortcomings in preparation, whether that’s a lack of ability, poor physical condition, tactical uncertainty or a lack of commitment to the cause. So, our newly-hatched roster of Dragons faces a serious challenge – one that promises to make the upcoming camp all the more interesting.