All Around the Red Star World – Europe

Concluding our flip through the Dragons’ atlas, we come to Europe. Here, we discover a strong Finnish accent, two great goalies and a couple of one-offs from hockey’s smaller nations. 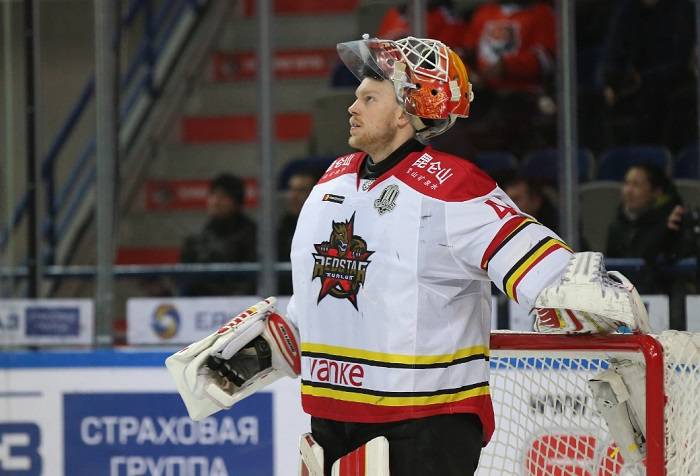 Magnus Hellberg made a big impact in his season with Kunlun Red Star. In the course of a year in China, he transformed himself into a bona fide KHL star and cemented his place within the Swedish national program. It represented a big turnaround for the Uppsala native, who arrived on the back of a handful of NHL appearances amid five seasons in North America. Hellberg quickly settled into the role of starting goalie for the Dragons, revelling in the kind of job security that was all too rare across the Atlantic. His six shut-outs that season remain a club record and Hellberg’s form earned him a call-up to the Olympics, where he didn’t get onto the ice, then a place on Sweden’s World Championship roster where he played three games as the Tre Kronor claimed gold in Copenhagen. His form with Red Star secured a move to SKA St. Petersburg, where Hellberg is now regarded as one of the top goalies in the KHL.

In addition to Hellberg, four Swedes have skated for the team. Linus Videll was the most productive among them, ranking third in team scoring in our debut season with 28 (9+19) points.

We’ve had plenty of Finnish Dragons down the years: our first head coach, Vladimir Yurzinov, has extensive contacts in Finland, while Jussi Tapola recruited plenty of players who had worked with him at Tappara in the past. In total, 16 Finns have suited up for the team, from Iron Man Joonas Jarvinen, who played on defense for three seasons, to a fleeting six-game cameo from Eetu Poysti.

The most productive of these, and one of the most durable, is Olli Palola. He joined the club in 2018 at the same time as Tapola, having earned a reputation as a goalscorer with Tappara earlier in his career. And, on Nov. 28, 2018, he wrote a little bit of KRS history in a thrilling game against Sibir: Olli became the first Dragon to grab a KHL hat-trick. He achieved his treble in dramatic fashion, scoring twice in 12 seconds to claw back a 3-5 deficit and force overtime with just three seconds left to play in the game. That, added to a first-period goal, secured his place in history. Sadly, though, Olli ended up on the losing side that day after Sibir recovered to win in a shoot-out.

Finland also supplied two of the club’s most productive blue liners. Tukka Mantyla joined for the Dragons’ first season and made an instant impact, potting the game-winner as the team took its KHL bow with a 2-1 triumph at Amur. He went on to collect 24 (10+14) points in the regular season and exploded in the playoffs to pick up 2+5. That makes the Tampere native our all-time leading post season scorer.

Another Finn, Ville Lajunen, went on to beat Mantyla’s 24-point tally. He had 28 (10+18) points in the 2018/19 campaign, including a helper on Palola’s hat-trick goal against Sibir. That record still stands, despite Trevor Murphy going close to matching it last season.

In total, five Czech players have suited up for the Dragons – but only two have represented the national team during their time in China. Tomas Kundratek almost made it, but he left the club before joining his compatriots at the Karjala Cup in 2018, making the last of his 25 appearances away to Avangard in early November.

However, last season saw Simon Hrubec and Andrej Sustr get the call from Milos Riha during the Euro Hockey Tour. For Hrubec, international recognition was no surprise: he had been part of the Czech team that narrowly missed out on a World Championship medal in Bratislava in 2019 and was very much in the thoughts of the selectors even before his impressive performances for Red Star. Meanwhile, he delivered better numbers even than Hellberg, earning a contract extension here. Sustr, meanwhile, earned a return to international play for the first time since 2016 and the World Cup of Hockey. Back from North America and enjoying plenty of game time in a high-quality league, Sustr played himself back into the frame for his country before the pandemic denied him the chance of a first World Championship call-up.

Red Star’s rookie season saw Tomas Marcinko and Martin Bakos enjoy plenty of time together on the ice. The Slovakian duo were both new to the KHL – and combined to set up the Dragons’ first ever goal in the league, converted by Sean Collins on the power play. And they continued to play a handy supporting role from then on: while Collins and Chad Rau led the scoring, our Slovak pair made a solid contribution, chipping 40 points between them. For Marcinko, that was the sole taste of KHL action; he moved to the Czech Republic and has been with Ocelari Trinec ever since. Bakos, meanwhile, tried his luck across the Atlantic before returning to our league with Sochi, then Admiral.

Two other Slovaks have enjoyed brief spells with KRS. Defenseman Marek Daloga had half a season in 2017/18, while David Bondra’s hopes of establishing himself as a regular member of our offense were halted by a serious injury last season.

French hockey has undergone a renaissance in the 21st century, with Les Bleus enjoying a long spell in the World Championship Elite Pool. Suddenly, it stopped being a surprise to see French players arriving in the big leagues. Fleury followed Stephane da Costa to the KHL after time in Finland, Sweden, Switzerland and Germany but, by his own admission, he found adapting to life in China was a challenge. Perhaps we never saw the best of this speedy but unpredictable winger during his year at our club.

Ticar, a two-time Olympian, has represented five KHL teams in total. Unfortunately, his brief spell at the club was probably his least memorable time in the league. After 12 games he returned to Cologne and is currently playing for Klagenfurt in Austria.