All Around the Red Star World – North America

Hockey’s heartland, the birthplace of the game … and home to some of the most successful Dragons. Canada and the USA haven’t just given us access to a rich seam of Chinese heritage talent, they’ve also provided crucial experience and knowhow to help develop our team. For Olympic medallists and a Stanley Cup winner to men who made history for Kunlun, there’s plenty to celebrate from across the ocean.

The 2018 Winter Olympics was the first since Kunlun was established. Thus, Gilbert Brule and Wojtek Wolski became the first Red Star players to go to the Games. The pair represented Canada – albeit an NHL-free version of the team – and came back with bronze medals. It might have been even better for them, were it not for a surprise semi-final defeat to Germany that robbed them of the chance to go for gold against the Russians. Brule, who picked up 3 (2+1) points in PyeongChang, was coming to the end of his first spell with the club: after the closing ceremony he resumed his career with Traktor and played a full season at Sibir before returning to the club for 2019/20. Wolski, meanwhile, was already back at Metallurg before the opening ceremony at the Games. However, he returned to China partway through the 2018/19 campaign and remained until December, when the effects of a series of injuries brought an end to his KHL career. He finished last season in the Czech Republic with Trinec.

Trevor Murphy has only played one season with the Dragons. In that time, though, the Ontario-born blue liner compiled 27 (10+17) points, enough to place him second in all-time scoring among our defensemen. Only Ville Lajunen has more – and that record is likely to tumble next season with Murphy due to return for a second spell. The 24-year-old was so prolific last season that he outscored the combined tally of the second and third highest-scoring defensemen at the club. That earned him the seal of approval from Russian broadcaster Match TV, which rated Trevor the eighth best KHL rookie of the past season.

It came exactly 14 minutes into our first game of the season. Away to Amur, on Sep. 1, 2016. Kunlun got on the power play and a well-worked piece of tic-tac-toe ended when Sean Collins fired into Juha Metsola’s net. It was the Dragons’ first goal in competitive hockey, scored by a Saskatoon native who joined us from the Hershey Bears. Collins went on to play the full season, picking up 39 (13+26) points in regular season and adding 3 (2+1) in the playoffs. That summer he moved to Sochi and played three seasons beside the Black Sea. Now aged 31, he’s a free agent at the present time. 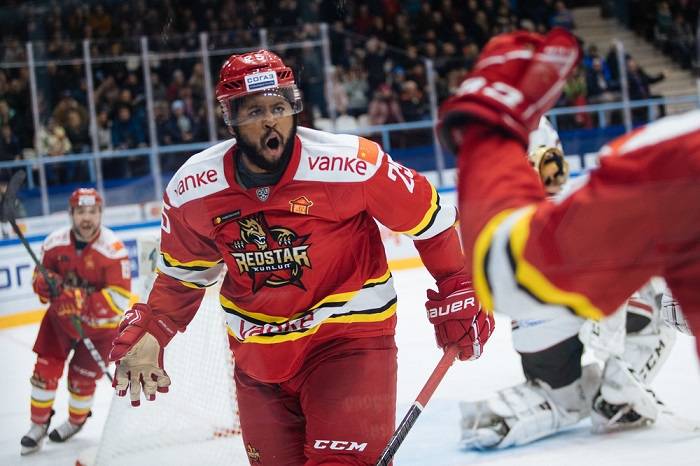 Devante Smith-Pelly’s stay with Red Star wasn’t the longest in our history. But his arrival from the Capitals midway through last season brought a Stanley Cup winner to our ranks for the first time. Smith-Pelly was part of the glorious Caps team of 2018, contributing seven playoff goals as Ovechkin & Co lifted the big prize for the first time in franchise history. That was the highlight of eight seasons in the NHL for this Ontario native; his move to China came about thanks to his contacts with Wojtek Wolski, Ethan Werek and Vic Bartley, among others. “I knew a bunch of guys and I heard that, although the travel could be kinda crazy, it was a fun experience,” he said in an interview last season.

Chad Rau was one of the big hitters of our inaugural season. Alongside Sean Collins, he regularly picked up the points – between them, they had 79 over the course of the campaign – and Minnesota-born Rau quickly became a fan favorite in Beijing. He also had the honor of being the first man to represent our club at the All-Star Game, joining up with the Chernyshev Division’s team in Ufa for the big event. This was the last season before a change in rules meant that every team was guaranteed at least one player at the KHL’s January showcase, so there’s no hint of tokenism about Rau’s inclusion. After completing a full season in China, he moved on to play for Neftekhimik, Avangard, Slovan Bratislava and, most recently, Glasgow Clan of the British Elite League, where he is also studying for an MBA.

We’ve had plenty of skaters from North America, but only two goalies from across the ocean have enjoyed significant game time at the club. Canada’s Barry Brust had nine games in the 2018/19 campaign, but it’s Jeremy Smith of the USA who has established himself as a key member of the team under Curt Fraser. Sharing goaltending duties with Simon Hrubec last season, the 31-year-old played a big part in the team’s improved performance during the campaign. He’ll be back next season, alongside Hrubec, to ensure a solid foundation for the team in the 2020/21 campaign.