“The greater the pressure, the better I perform”

Monday brought news that Alexei Kovalev will replace Curt Fraser as the Dragons’ head coach for the coming season. In an interview with Russian media agency RIA Novosti, head coach Kovy spoke of how the decision was made and why he’s looking forward to the coming season despite the many challenges facing our organization. 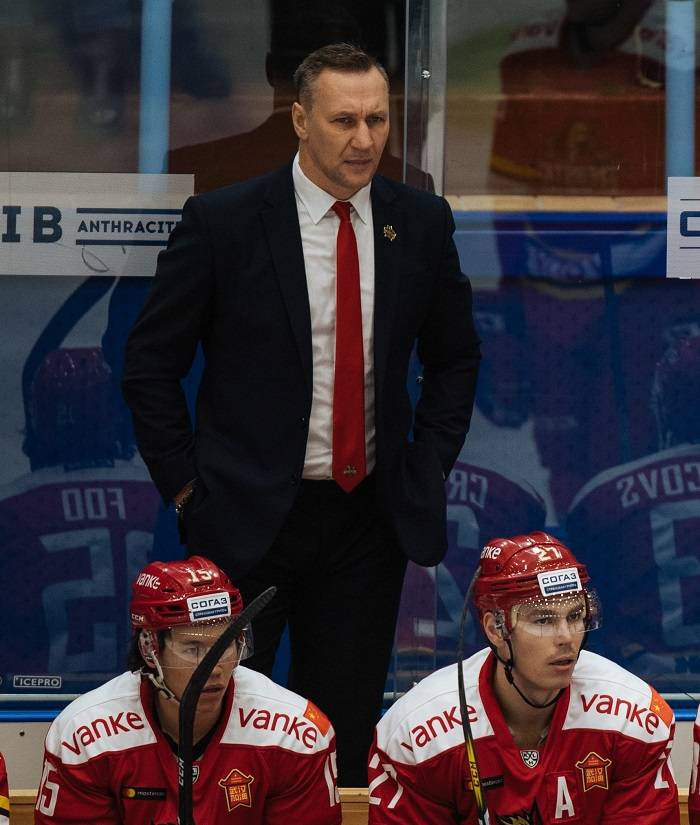 How did you hear about the decision to put you in charge of the team?

For me, this was unexpected. We were all gearing up to come back next season with the same coaching staff. But it turned out that the situation with the virus was bigger than we first thought, it created many issues. It meant that we couldn’t maintain everything we created last season. Visas, documents, borders … right now there are lots of questions. It’s difficult to register any document to enable foreigners to come to Russia. As a result, we made changes to the coaching staff.

It’s a serious challenge for me. But I was under pressure throughout my entire hockey career. And the greater the pressure, the better I played. Now, I hope it will be the same for me as a coach.

Of course, I’m happy to be starting a completely new stage of my career. It’s one thing to be a good player, but being a good coach is completely different. Over the past couple of years, working on the coaching staff [at KRS] I’ve learned that this is a completely different job. Sure, it’s still hockey, but I have to prepare and execute entirely new strategies that require fresh knowledge. As before, I’m still in good shape. I wouldn’t say I could easily go out and play in a KHL game, but I expect to be a part of the training process right there on the ice. When that happens, I still feel like a player, so it’s easier for me to understand our guys and explain things to them.

‘I’LL BE ON THE FIRST AVAILABLE FLIGHT BACK TO RUSSIA’

You’re in New York right now. When will you be joining the team in Russia? [due to the coronavirus restrictions in China, Red Star is planning to base itself in Russia for the coming season – ed]

I’ll go to Russia as soon as I can get a flight. I understand that flights will resume on Aug. 1. I hope I can be one of the first to leave. If it was possible, I would already be in Russia. And, of course, if the KHL or the club arranges a charter, I’ll get there that much quicker.

I can imagine how much work lies ahead of us. We need to put together a team, sort out all the documents, undergo medical tests. It’s still not at all clear when the team can start working together. I don’t think the training process can start before Aug. 5 or 6.

If the season starts on Sep. 2 as planned, that gives less than a month to prepare.

We’ll have to rely on the guys’ individual programs. After all, they are professionals and they should come to camp in more or less good shape. But that means right now they can’t sit on their hands, they need to start getting ready at home. We’ll put together an intensive preparation – we’ll have to try to do as much as possible in a short space of time.

Do you have a clear vision for the Red Star team that will start the season? At present there are only 13 registered players according to the KHL website.

Recruitment is one of the tasks we still face. Every day now, we are deciding which players will form our team. Of course, it would be good to retain the same core as last year, because these guys already know each other. I don’t want to have to start over. On the other hand, there are guys with injuries and I don’t want anyone who is not ready to practice and play. Another important point is how easily players can get over here: that includes the Chinese heritage players who we are looking at as candidates for Beijing 2022. It’s possible that, because of these problems, we’ll have a roster with more Russians and European players.

Does that mean Kunlun will be a more Russian team?

In general, it wouldn’t be a bad thing to see more Russian players. After all, they know all about the KHL. But, first of all, we’re a Chinese team and, second, pretty much every player of KHL standard is already under contract. We’ll have to create a kind of fusion, mixing Russians, Europeans and North American players with Chinese heritage. We might not be able to have many Chinese players until all the restrictions are lifted, but I think that in the end we could see half the team eligible to play for China at the Olympics.

What are your goals for the coming season? Given all the problems facing the club, is it just a case of ‘survival at all costs’?

No, for me there is only one goal – to win. I love winning, I love being part of the action for as long as possible. It doesn’t matter whether I’m on the ice myself or sending out a team. Therefore, Kunlun can only have one goal – to make the playoffs. There can be no alternative, I don’t care if we build a team of VHL players or recruit from all over the world. It seems we’ll have a lot of youngsters. If these guys want to play at the highest level, they need to prove themselves. And next season, we’ll be playing near Moscow so all our players will be very visible.

Do you feel that Kunlun has developed as an organization over the past couple of years?

We’ve done a lot, but there’s still more to do. Kunlun has raised interest in hockey among a certain sector of the audience. Far more kids are playing hockey now. Of course, we’d like to see more fans in the arena, but that’s not something we can solve overnight. And, as you can see, there are problems that are out of our hands. In Moscow and its outskirts there are a lot of Chinese citizens. I’d like to think they might come to our games in Mytishchi.

You’ve said in the past that you’d be happy to help China at the Olympics in 2022. How serious is that prospect?

Of course, I’d be delighted. There’s nothing better than being part of the Games. It’s a great thing for any athlete to be involved. It makes no difference whether you’re a player or a coach. If I had the chance to join the coaching staff for Team China at the 2022 Olympics, that would be fantastic.

Do think China has any chance of making an impression at the Games, especially considering we are now very likely to see NHL players at the Olympics again?

There’s always a chance to achieve something. But over the next two years we need to give it everything. We need to look at our players, find the ones we can work with. Any possible candidate with the appropriate Chinese heritage should be on our radar. Obviously, it would be foolish to suggest that China could get among the medals, but I’m sure it’s realistic to put together a team that won’t be embarrassed to take to the ice with the best players in the world.