All around the Red Star world – China

In four years of KHL action, the Dragons have recruited players from 14 different countries. As we wait for more news about how and when hockey can return, let’s look back at some of the stars who jetted into the Dragons’ Lair. But, to start with, let’s talk about the potential core of China’s 2022 Olympic roster.

Developing Chinese hockey is the reason our club exists – with China’s national team poised to make its Olympic debut in less than two years’ time, the pressure is on to prepare a roster that can take on the best in Beijing. That means nurturing Chinese-born talent, and carefully recruiting players with Chinese heritage that can make them eligible to represent the country on the international stage. 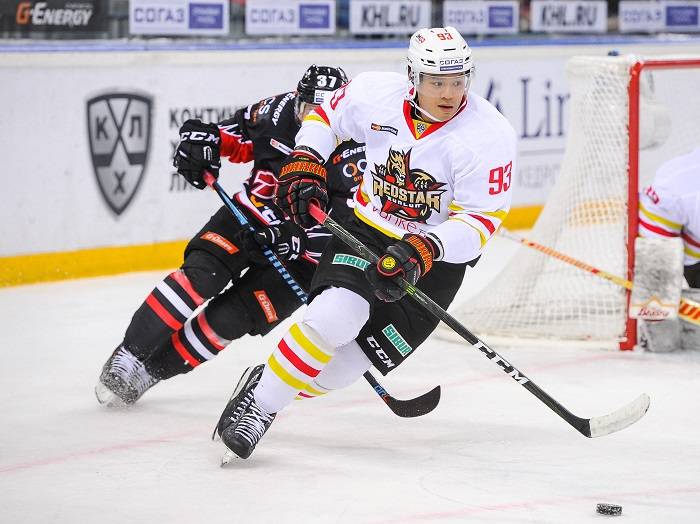 Zach Yuen was a trailblazer during Red Star’s first season. Born in Vancouver to a Chinese family, he became a poster boy for the Dragons – the local face of an international team. Young, versatile and learning fast, he won plaudits for his willingness to fill in on defense or offense as needed and wrote his name in the history books when he became the first Chinese player to get a point, then a goal, in the KHL. Zach is still at the club, a rare survivor from that inaugural campaign. Injuries have slowed his progress in recent times, but he returned to VHL action towards the end of last season and will be pushing for a return to the first team in the coming campaign.

When Brandon Yip’s dad put a hockey stick in his young son’s hands in Maple Ridge, BC, it was a typical Canadian rite of passage. But Brandon’s dad, the third generation of his family to live in Canada, was also determined to keep his child in touch with his Chinese ancestry. So, when Red Star came calling in 2017, Yip was ready for the challenge of being a hockey ambassador as well as a player. Three seasons later, he’s played more games (160), and scored more points (85) than anyone in the club’s history. As our captain works through the naturalization process that will allow him to join us at the Winter Olympics, he’s looking forward to helping China maximize its potential on the biggest stage. “I’ve heard that the national team is highly skilled, they’re fast, but maybe they struggle with strategy and team play at times,” he told IIHF.com. “That’s where bringing in players like me and the other Chinese heritage guys can help. It’s tough to teach skills from scratch, but it’s maybe a bit easier to explain some of that game management.”

Vic Bartley is the type of defensemen coaches love. A solid six-footer whose never afraid to go where it hurts, he’s made a role for himself as a battling, resilient force on the blue line. A virtual ever-present in his two seasons at KRS so far, Bartley’s commitment to the cause makes him one of the first names to go on any teamsheet – and a terrific example to his colleagues.

Tyler Wong and Spencer Foo arrived at the club at the start of last season, in good time to complete two full years of club hockey in China and secure Olympic eligibility according to IIHF rules. And both made a profound impact in their rookie KHL campaigns. Wong, 24, came with an impressive scoring record in major junior hockey and didn’t miss a single game in the KHL. His 31 (15+16) points had him tied with Yip as the team’s leading scorer. Foo, 26, arrived after a spell in the Flames organization that saw him play four times in the NHL. He wasn’t far behind Wong, with 25 points putting him fifth on the scoring chart. Both of them are under contract for next season, which will enable them to complete the requirements to represent China at the Olympics – and hopefully see them fire the Dragons to a playoff place.

Luke Lockhart, like Brandon Yip, has played three seasons with the Dragons and his 157 appearances are second only to our captain. Another native of British Columbia, this 27-year-old has steadily improved during his time on the team and last season was his most productive to date. Lockhart is developing into a dangerous sniper, and his work ethic continues to win praise.

Traditionally, hockey in China was played in the north – those long winters in cities like Harbin or Qiqihar in the Heilongjiang province were ideally suited to the game and the proximity of the Russian border might have helped its influence to spread. With the Olympic boom in winter sports, the pattern is changing – Red Star has helped nurture an audience for hockey in Beijing, Shanghai and even southern Shenzhen, far from the game’s heartlands. That augurs well for future generations of hockey talent, but at the moment the leading Chinese-born players tend to hail from the North.

It’s true of goalie Sun Zehao, the first Chinese goalie in the KHL. The 24-year-old was born in Harbin and learned the game there before moving to Beijing to play in the national championship. Later he became part of the KRS organization and, while he’s mostly played in our feeder teams, he made his KHL debut in 2018/19, coming off the bench twice to get a taste of the big time.

Sun had contact with the Vancouver Canucks and served as third goalie when they were over here for the NHL China Games in 2017, but believes that KRS is crucial to the growth of Chinese hockey. “We need more opportunities for our players,” he told KHL.ru. “Many young players have to stop playing because they cannot earn a living at the game. They change professions, or maybe they leave to play in North America. It’s very difficult to start a career in hockey in China.

“That’s why it’s so cool that Kunlun Red Star and the KHL came to China. I’m sure this will start a new stage in our hockey development.”

Sun is not alone in learning the game up North before reaching the KHL. Forward Xia Tianxiang played 15 games in the KHL during our first season, having previously represented both Harbin and Qiqihar in the Chinese national league. He was involved at the same time as Wang Guanhua, another forward who played once in the KHL and is now part of our VHL coaching staff.

But there’s a special place for Rudi Ying, the Beijing born forward who became the first Chinese-born player to score in the KHL. The 21-year-old is arguably the highest-profile local player, boosted by a celebrity father (renowned movie actor and director Ying Da) and a TV role in reality show ‘Ice Hockey Hero’. Hockey on prime time TV? This is a sport that’s booming!