Battle out of suitcases

KHL.ru’s review of each club’s 2019/20 campaign looks back at Kunlun Red Star’s season. In the club’s fourth season in the league, the website notes, the Dragons came close to repeating their greatest achievement to date and returning to the playoffs.

Red Star made its KHL debut in 2016/17 and made the playoffs under the guidance of Vladimir Yurzinov. In post season the team even managed to win one game against defending champion Metallurg Magnitogorsk. The two subsequent campaigns were less successful, but in 2019/20 the Dragons spent a long time in the top eight and, at one stage, seemed destined to return to those playoffs. 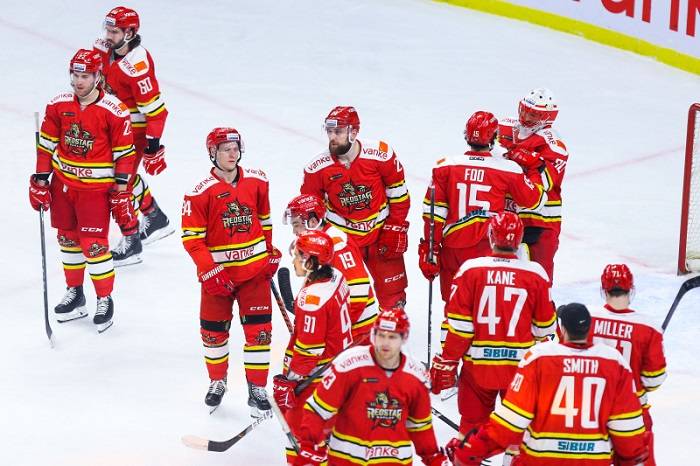 HOW THE SEASON PLAYED OUT

Curt Fraser’s team began the season with a six-game home stand in unfamiliar surroundings in Shenzhen. This was a new destination for the KHL, the southernmost city to host action in our league. Red Star made a solid start, with three wins against Salavat Yulaev, Barys and Traktor. Next, the Dragons flew off on an eight-game road trip, which brought just two victories.

In mid-October, the club parted company with Mathew Maione. He had been one of the most productive defensemen of the previous season at Dinamo Riga but was unable to reproduce that kind of form in China. Before the first international break in November, the club enjoyed a record-breaking five-game winning streak. That club record was all the more impressive considering four of those five games were on the road. By the end of November, the Dragons looked good for a playoff spot after taking 14 out of a possible 16 points in eight games that month. But as 2019 moved in 2020, the team hit a slump with just one win in six on the road. The biggest test of the season would come when the team returned home.

A strong show in Beijing in a five-game home stand in January could have secured a playoff place, but things didn’t go to plan. Back-to-back games with Sibir yielded just one point, before the team rebounded with a hard-fought win over high-flying Ak Bars and two victories over an Amur that looked to out of the post season picture. It was all the small surprising that within a month, the Tigers would be in direct competition with the Dragons for a place in those playoffs.

That home game against Amur on January 22 was the last home game of the season – the coronavirus pandemic played havoc with the schedule and the team spent more than a month living out of suitcases and playing rearranged ‘home’ games in Moscow and Novosibirsk. In the event, Kunlun finished four points short of a playoff place. Those last nine games yielded just three points, although the team’s main aim was entirely realistic: if Red Star had defeated three teams that were already out of playoff contention – Traktor, Severstal and Dinamo Riga – the Dragons would have extended their campaign.

“I think we could have easily put together a few wins during that final road trip,” said Jake Chelios. “But maybe some games got away from us. That’s how it is in hockey. I think if another 10-15 games had gone on, we’d go hot again, and we’d have been right back to where we started. We got cold at the wrong time, and it cost us a playoff spot … In the middle of January we went on a road trip and we were warned that it might be difficult to come back to China. We packed for a two or three-week road trip and we thought we’d come back, but the coronavirus situation changed all that. We found out a couple days later that we would be living in hotels for a month and a half! A lot of us were living in hotels in China so I don’t know if it changed that much for us, but we definitely learned to live out of a suitcase. It wasn’t the worst thing in the world. We got our bags back from China maybe a month after we got home. The club did a good job of throwing my stuff into boxes and getting it to me.”

Curt Fraser took over at Red Star in January 2019. The end of that campaign was not immediately successful, but the club kept faith with the American for the coming season. In pre-season the team was extensively rebuilt and subsequently the Dragons looked like genuine playoff contenders.

In 2019/20 the team made notable improvements to its defense. Goalies Jeremy Smith and Simon Hrubec divided the games equally, with the Czech having a slightly better set of stats. Despite a better defense, Fraser was unable to solve Kunlun’s problems with scoring goals. But he signed a one-year extension to his contract and will look to secure that playoff spot next year.

“For a start, you need to keep a coach in place and, so far, that hasn’t happened here. How many coaches have we had here in four seasons – five? And yet it’s directly from the coach that we get a stable team. The players find a common language and want to stay, you can preserve the skeleton of the team and start making progress. In the past, we haven’t had that here and that’s a bad thing. To play in this league isn’t easy and that constant change makes life even more difficult. At some point we simply have to get away from that,” Fraser said at the end of the season.

One of Red Star’s problems was consistency: the team could beat the best but often dropped vital points against teams at the foot of the table. Over the course of the season there were three memorable victories against the top teams in the Eastern Conference. The stand-out came in Balashikha on Oct. 25 when the Dragons impressively defeated Avangard 3-0. Jason Fram got his first two goals for the club and Jeremy Smith made 34 saves.

There were plenty of losses, and many by big margins. One of the most painful came in Nizhny Novogorod on Dec. 21. Red Star led 2-1 at the end of the first period but didn’t come out for second, allowing three goals in 85 seconds at the start of the middle frame. It ended with a 7-2 scoreline as Kunlun fell apart, picking up more than 90 minutes of penalties.

Several players took the chance to announce themselves on the big stage, but the most impressive was forward Tyler Wong. Over the season, he matched team captain Brandon Yip for scoring, compiling 31 (15+16) points to share top spot in the club scoring charts. The 24-year-old came to China after two seasons as a pro in the AHL and ECHL, but had just 22 points in that time. The forward, who already has Chinese citizenship, will remain at the club for at least one more season.

Before the season there were high hopes for two well-known forwards – Wojtek Wolski and Olli Palola. Wolski was back for a third season with the Chinese team but was off the pace from the start and left the club partway through the campaign. In 2018/19, Palola was one of the leading forwards on the team but this time around he found points hard to come by, managed just 8 (5+3). If these two players had matched pre-season expectations, that might have been enough to get the club into the playoffs.