It’s May Day, traditionally a time to celebrate the spring and look forward to new beginnings. In the hockey world, it’s also the time when rosters are rebuilt. Most player contracts run to April 30, so today marks the start of the trade in free agents. It’s also a time when clubs can announce their retained list of players who are coming back next season.

In previous summers, the Dragons have gone through drastic surgery. This year is different. Head coach Curt Fraser was signed up for 2020/21 some time ago – the first time in the club’s short history that a coach has returned after a full season behind the bench. He’s already stated that he does not want to see wholesale changes again this summer, so it’s very much a case of evolution instead of revolution. 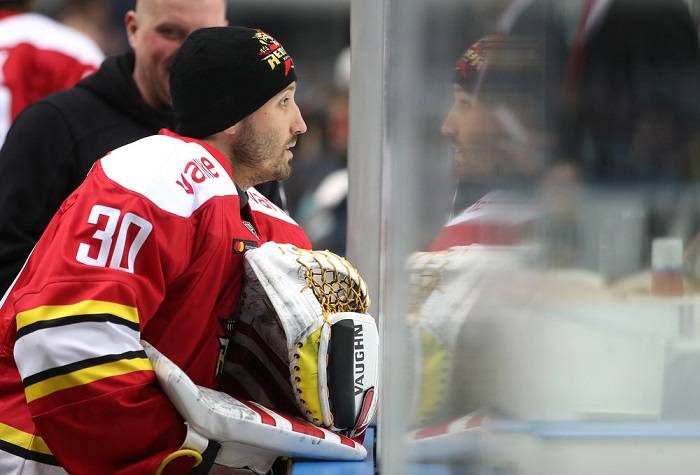 And there are plenty of familiar faces who will be returning to the team as soon as it becomes possible to start pre-season work. Many of last year’s roster were on two-year deals, and Red Star has already moved to secure the return of goalie Simon Hrubec. The Czech international shared netminding duties with Jeremy Smith last season, and both of them performed strongly throughout the campaign. Hrubec, 28, agreed his extension last month after posting a .932 save ratio across 32 games in 2019/20.

So far, Hrubec is the only player to put pen to paper on a renewed deal. But he’s far from the only man signed up for next year’s squad. Goaltending colleague Jeremy Smith is also back for the second year of his contract and we’re looking forward to those two pushing each other to even greater heights in the coming months.

On defense, Trevor Murphy’s two-way contribution is back for another year – his 27 points placed him fourth in team scoring, and first among blue liners. Jake Chelios, who finished the season with the best +/- rating among our defensemen, will be with him, bringing his trademark cultured, smooth-skating game. Jason Fram, 25, who divided his team between the KHL and VHL last season is back and looking to continue the progress he made in his first year out of college hockey.

Our offense also features plenty of last year’s stars. Captain Brandon Yip, 35, leads the way as he continues to establish himself as an all-time great for the franchise. Fellow Chinese heritage players Tyler Wong and Spencer Foo both made assured KHL debuts last season after arriving from North America. Wong tied with Yip as our leading scorer last season, compiling 31 (15+16) points; Foo wasn’t far behind with 25 (8+17). Both players are in their mid-20s and show every sign of developing in formidable contributors.

Then there’s Gilbert Brule, perhaps the most experienced man on the roster. Now 33, our Canadian Olympian brings more NHL experience than anyone else currently signed for next season, and his 91 games for the Dragons have brought 55 (24+31) points.

Among the other returning forwards, we have Brandon Magee and Alex Riche, two players looking to develop into stars of the future. Magee spent the bulk of last season in the VHL but the 26-year-old showed promise when called into the first team. Riche, meanwhile, struggled with injury all season. The 23-year-old Princeton graduate had no opportunity to show what he can do, and will be eager to make up for lost time when the puck drops in the fall. Finally, enforcer Garet Hunt remains available to beef up the team’s physical presence when required.