With the sporting world silenced, it’s hard to imagine that the Olympic Games are on their way to Beijing. But, behind the scenes, preparations for the big spectacle in 2022 are continuing. And on Friday, China had confirmation of its opponents in the group stage. 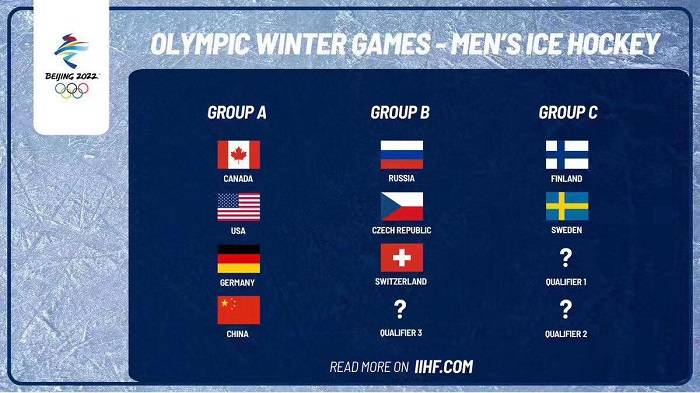 The challenge facing our team could hardly be greater – nor more exciting. China will be up against Canada and the USA, plus 2018 silver medallist Germany. It promises to be a fantastic opportunity for our players to pit themselves against some of the strongest hockey nations on the planet on home ice in Beijing.

The clash with Canada should be a particular thrill. Not only does it pit our guys against the homeland of hockey, it could also set up some intriguing personal battles. Many players in the Chinese national program grew up in Canada and qualify for China via their ancestry. Could we see Brandon Yip taking on his former Nashville team-mates Shea Weber and Ryan Suter? Or maybe meeting up with his old Boston University colleague Matt Gilroy, who was part of Team USA in Korea at the previous Games?

The groups at the Olympics are drawn up based on the IIHF rankings. These are updated annually, usually at the end of the World Championship in May. This season, of course, due to the curtailment of the international program, there is no World Championship and, as a result, the rankings can be announced earlier than usual. China’s national team remains in 32nd place in the IIHF ranking. Unsurprisingly, its points tally (1,420) and position is unchanged.

For the women, there’s a climb of one place in the international rankings as our girls moved to 19th place overall with a total of 2,250 points. That means China will be placed in the lower-ranked Group B, along with Japan and three qualifiers, when the Olympics come to Beijing in 2022. The qualifying groups for the women’s tournament are set to be played during the coming season. The final qualification groups, which will determine China and Japan’s three other opponents, are scheduled for February 2021 and will likely take place in the Czech Republic, Germany and Sweden.

The 2022 Olympic Winter Games are scheduled for Beijing. The hockey tournaments are set to run from Feb. 4 to Feb. 20.