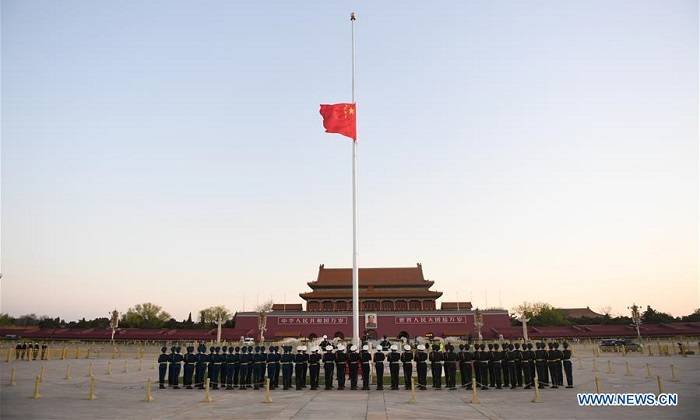 On Saturday morning, China fell silent. All across this vast nation, people paused at 10 am local time to observe three minutes of quiet contemplation as part of a day of mourning for the victims of the coronavirus. The silence was broken by the doleful wail of air raid sirens, train whistles and ships’ horns, sounding the grief of the country.

The Chinese flag flies at half mast across the country, and at Chinese consulates and embassies across the globe, and all public activities across the nation are suspended for the day.

Here at Kunlun Red Star, we too are paying tribute to everyone affected by the COVID-19 outbreak. At the end of last season, our home game against Dinamo Riga had to be relocated to Novosibirsk due to the unfolding public health emergency. That day, both teams – and our Siberian host – came together to pay tribute to those battling the disease. The Dragons wore special patches on their uniforms, promoting the #WuhanStrong and #ChinaStrong messages. Before the game, a special ceremony reflected on the difficult events back home.

And it wasn’t limited to the men’s team. Our KRS Vanke Rays women’s team proudly wore the same patches during their run to the Women’s Hockey League title. Rays captain Xueting Qi talked about the impact her team’s success had at a difficult time in China.

“I think it was important for people back home,” Qi said in an interview with IIHF.com. “When we won the championship, it made quite big news back home, a lot of people heard about what we did in Russia. I hope it can help to inspire people, to give them confidence and strength. In the playoffs we were wearing ‘#Chinastrong’ and ‘#Wuhanstrong’ patches on our uniforms. We wanted people to know that we were playing for China and we are always with them.”

The Dragons will also feature in the museum planned in Wuhan to commemorate the battle against the virus. After the game against Riga, the club donated a game worn jersey to Haier, one of the KHL’s commercial partners. Haier is also involved in setting up the museum and will donate the jersey to the collection.