Keep calm and … keep the puck!

Let’s continue our look at the stats from last season. Today, we’re dealing with some of the numbers that we’ve already glanced at – but now we’re going a more in depth. As always, the season throws up dozens of figures, and not all of them are all that meaningful or significant. Nonetheless, there’s plenty of extra detail to dig into and, in the close season, there’s time to tease out some of the underlying trends and uncover some interesting details about the Dragons.

The first thing that becomes clear is the lack of ‘market-leading’ stats. That’s hardly a surprise – it’s unlikely that a team finishing 18th in the table would be topping the charts for goals scored or games won. Sadly, the only category where the Dragons came out on top this season was not exactly a source of pride – with 243 penalties over the course of the campaign, no other team visited the penalty box as often as ours.

Happily, though, there are some more encouraging signs:

When we had a full complement on the ice, our puck possession stats were impressive. In the whole of the KHL, only seven of the 24 teams held possession of the puck for more than 51% of their time on the ice. Five of them were the undoubted leaders of the season, a handful of top teams who, were it not for forces beyond our control, would be entertaining us right now in the playoffs: SKA (56.2%), CSKA (55.7%), Jokerit (54.4%), Ak Bars (53.7%) and Salavat Yulaev (53%). Right behind them came Metallurg and our own Red Star, both with 51.1%. Not bad company to be keeping, right?

It’s a tribute to the work of Curt Fraser and his coaching staff that a roster with so many new players at the start of the season – and frequent reshuffles as the campaign went on – managed to achieve a level of teamwork strong enough to match the best in the league when it came to controlling the puck.

While this isn’t always an indicator of a winning team – after all, for every game decided by careful possession-based play, there’s another settled by a lightning breakaway – it’s still a meaningful stat. It says a lot about the skills of our individual players, their ability to hold the puck and find the right pass. It also speaks of the coordination and understanding between our guys. Puck possession might not determine the result of every game, but it can characterize the strengths of a team. Among the individual stats, we find two indicators where the Dragons lead the way. Defenseman Jake Chelios has no equal when it comes to winning battles for the puck. On average, he made 11.1 challenges for possession in each game, and won exactly 7 of them. His closest rivals were Nikita Tryamkin (Avtomobilist; 11.3/6.9), Morgan Ellis (Sochi; 10.3/6.7), Mikhail Orlov (Torpedo; 11.2/6.7) and Daniil Barantsev (Torpedo; 12.2/6.7). We can see that Ellis had a slightly higher ‘win percentage’ than Chelios, but in absolute terms our boy was top of the league. 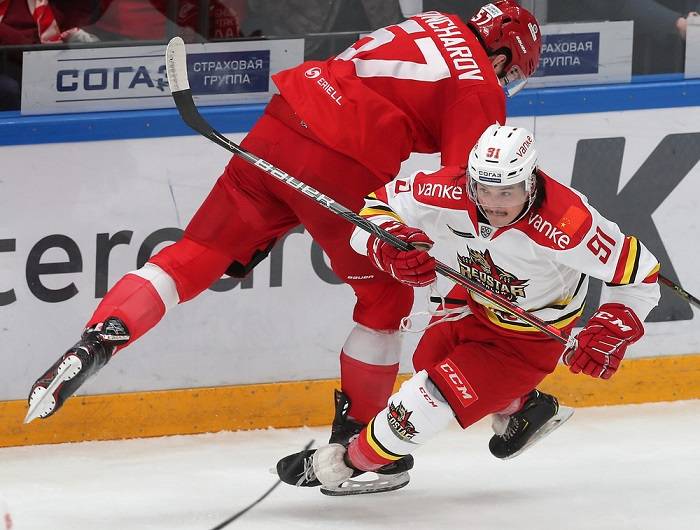 Then there’s Tyler Wong, a player who defensemen fear. Our young forward, in his first season at this level, was on the receiving end of more hits than anyone else in the KHL. Clearly, opposing teams identified Wong as a major threat to the net and hit him 92 times over the course of the season. That rough treatment did not discourage him at all – Wong finished the season with an impressive 31 points.

Second on that list was Darren Dietz, the giant Barys defenseman. He faced 85 hits, and scored 32 points. The Kazakh international, though, stands 187 cm tall and weighs in at 91 kg; Wong is just 175 cm and 78 kg, but clearly is no less strong.

Only two other players faced more than 80 hits in the season, and they were both defensemen – Ville Pokka (Avangard, 83) and Bogdan Kiselevich (CSKA, 80). Apart from Wong there were only three other forwards in the top 10: Evgeny Chesalin (Sibir, 76), Brian O’Neill (Jokerit, 76) and Ildar Shiksatdarov (Neftekhimik, 71). Of those three, only O’Neill had more points than Tyler – and he’s an experienced player at this level with four productive years in Helsinki under his belt. Wong is a rookie. Given time, our guy will settle into the league, learn how to avoid the hits and start producing numbers no worse than the Jokerit front man. Of this we have no doubt.

Thus, we have three diverse statistical indicators. On the face of it, perhaps, they don’t have much in common. But taken together, we can see something of a team philosophy emerging: keep calm (when the hits fly in) and keep the puck. That could be a motto for the current flight of Dragons – and one we’ll try to follow.