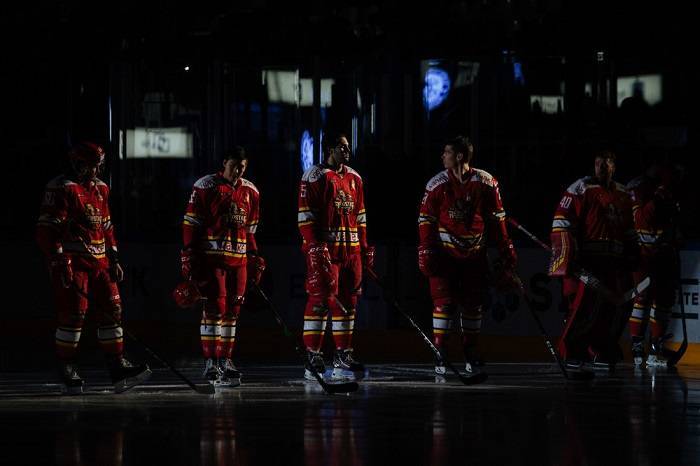 Now that our fourth season in the KHL is in the books, it’s time for a summary. We started on this earlier in the month when we published an interview with head coach Curt Fraser, giving his thoughts on the club’s progress over those 62 hard-fought games of hockey. Now, we’re looking at some of the stats. Of course, the key figures are the ones about points on the board and placings in the KHL standings, but the beauty of statistics is that we can explore them from alternative angles and find the stories behind the headline figures. So, let’s go …

In the last couple of days of the regular season, two teams overtook the Dragons in the Eastern Conference table. In a couple of years, simply looking at the record books will show Neftekhimik and Amur finished higher in the rankings. Many might logically conclude that they must have been the stronger teams over the course of the campaign. And that would be true, at least to some extent.

However, if we look at our head-to-head results against these teams, a different pattern emerges: Red Star outshone Amur on three occasions out of four, and won all four of its games against Neftekhimik. Suddenly, that question about which was the better team looks a bit different, doesn’t it?

But that’s the difference between a round robin league program and a knock-out cup. In the league, of course, results against individual opponents matter less than the overall progress throughout the year. In that sense we can say Neftekhimik did better than us, because Vyacheslav Butsayev’s team made it to the playoffs. There was a similar story last year, when Traktor claimed eighth place in the West despite failing to score on Kunlun in two encounters (both games ended in 2-0 victories for the Dragons). That’s the harsh reality of our gruelling regular season campaign.

As you know, the KHL has divisions as well as its two conferences. Thus, we can also talk about a divisional championship. And this season’s results against our Chernyshev Division rivals are worth a closer look.

Overall, we performed quite impressively. Only one of our divisional rivals repeatedly got the better of us: against Salavat Yulaev we lost three out of four games, and our one victory game in a shoot-out. Elsewhere, we at least shared the spoils. Barys, the Chernyshev Division champion, won two and lost two against Red Star; with Avangard, last season’s Gagarin Cup runner-up, we were also even, gaining and giving five points. We were slightly better than Admiral (5-4) and significantly ahead of Amur (6-2). A Chernyshev Division table compiled purely from results between the six teams would look like this:

Compared with the official table on the KHL site, there are some obvious. For example, how did Avangard, so far clear of Barys, end up taking second place in the division? Is it a paradox, or daylight robbery? Or perhaps neither, taking into account the full season and the teams results against opponents from outside the division. After all, in four head-to-head meetings, Barys enjoyed three wins against Avangard. Perhaps top spot was not so undeserved after all.

As always, our ‘local’ derbies attracted extra attention. In our Far Eastern corner of the KHL, far from the rest of the league, three clubs share the same challenges. Our Dragons, along with Amur and Admiral, understand all too well what’s it’s like to face long road trips – last season, Red Star spent just over nine days on aeroplanes and the numbers were similar for our neighbors. Consequently, our visits to Khabarovsk and Vladivostok feel like weekend breaks: it’s not unknown for people to spend longer driving to their holiday homes than we spend on flights to our nearest rivals.

So, it’s no surprise that as the seasons pass, the idea of a ‘Far East Cup’ – albeit a symbolic one – has started to mean something. And it’s nice to report that, for the second time in four years, we’ve got our hands on the (virtual) hardware. In our first season we took the honors by the narrowest of margins, but this time around our victory was more comprehensive. Taking the results of the games between the three teams, we collected 11 points compared with 8 for Amur and 6 for Admiral.

Once again, we fell short of our principle target and could not make the playoffs. Thus, our first KHL campaign remains unique in our short history. But, looking at the three subsequent seasons, there is obvious progress. This time, we were in with a shout of a playoff place until the final days of the regular season, whereas the two previous years saw us out of contention long before the official end. We had 26 wins, our best return in three seasons. And we allowed fewer goals, on average, than in those previous two campaigns: in 2017/18 we allowed 2.6, one year later it was 3.1 and this season dropped to 2.5.

True, our scoring did not quite keep pace. Last season we had 2.3 goals per game, compared with 2.2 this time around. And that’s the kind of fine margin that can make a huge difference overall. Taken over the entire season, it could be worth six extra goals. Looking at the number of games we lost by the odd goals, it’s entirely plausible to suggest that six more goals could bring six extra points – and that would place us in the top eight.

So, as always, there are things to work on. The key thing is to ensure that our progress continues and we move towards our goals.