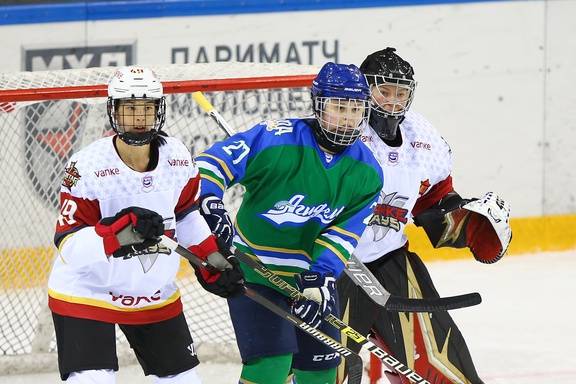 The Vanke Rays are one step away from glory following a 3-2 victory in game two of the Women’s Hockey League Grand Final. For the second time in two days, our girls won in Ufa to open a 2-0 series lead over defending champion Agidel. Now the team can claim the title with one more win when the teams meet again on Wednesday.

Two goals in the second period from Rachel Llanes and Amy Menke put KRS in control of this game, and midway through the third Leah Lum made it 3-0. But Agidel is always a dangerous opponent and hit back with two late goals to set up a tight finish. Happily, Noora Raty withstood a third-period fusillade to finish with 47 saves on the night and backstop the team to another vital win.

If that third period was one-sided, the first two were very open. Both teams exchanged attacks at will and the two goalies – Raty and Anna Prugova – demonstrated just why they are first choice for their respective countries with some solid shot-stopping. The only surprise was that it took so long to break the deadlock, with the opening goal coming in the 33rd minute.

Llanes got the opener during one of many wild passages of play that saw big chances at both ends. On this occasion, Agidel had two good opportunities to score interspersed with a big save from Prugova. But another Raty save kickstarted another counterattack. Alex Carpenter sent Llanes up the ice in a 2-on-1 rush and this time our American forward did not need the help of her partner. A well-placed shot over Prugova’s glove gave the Rays the lead midway through the game.

The teams continued to trade big opportunities and the wide-open nature of the game contributed to a second goal for the Dragons late in the middle frame. Yelizaveta Lebedeva could – probably should – have tied the scores when she got clean through on Raty, but our Finnish star stopped the puck. Then Agidel got in a mess trying to keep the Liu Zhixin’s clearance in the KRS zone, Amy Menke nipped in to steal the puck and took it straight down the ice to beat Prugova once again.

The third period, unsurprisingly, saw the game change. Agidel had to throw everything forward and dominated much of the game. The shot count for the final stanza read 22-5 in the home team’s favor, but the first goal of the session came from one of that handful of KRS efforts. The Lady Dragons killed two penalties in the early stages, bided their time and launched a devastating counter. Menke turned provider, Lum arrived between the hash marks and took advantage of the time she was given to pick her spot and beat Prugova with a wrister.

Inevitably, there was a fightback. Forwards of the caliber of Sosina are hard to keep quiet and she put her team back into the game with five minutes to play when her shot looped up over Raty’s shoulder. Then, on a late power play, she created a second goal, feinting as if to shoot then picking out Lebedeva at the back door to slip the puck past Raty and make it a one-goal game with 80 seconds left to play.

In a game played on International Women’s Day, there was a fittingly international feel to the scoreboard. On the KRS side, Llanes, Carpenter and Menke represent the USA, Lum is Canadian, Zhixin hails from Qiqihar in China and, as mentioned, Raty comes from Finland. Against us, the Agidel roster is predominantly Russian, bolstered by Slovakia’s Nicol Cupkova and the Czech Republic’s Alena Mills. One of the highlights of the season has been the way that the Vanke Rays have brought a new, cross-border element to the Russian Women’s Hockey League.