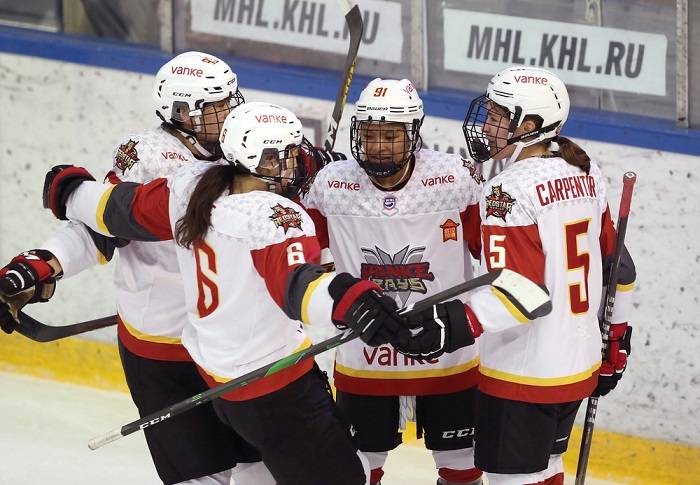 The Vanke Rays’ first taste of cup final action could hardly have been sweeter, with our girls taking a 3-1 verdict from defending champion Agidel on the opposition’s ice in Ufa. Goals from Jessica Wong, Rachel Llanes and Megan Bozek secured the verdict; Alex Carpenter had two helpers along the way.

There wasn’t much to choose between the teams in the build-up to the series, but Agidel came into the game with ample experience of these gold medal showdowns. The Ufa team has won the cup in the past two seasons and has never lost a playoff series in the history of the WHL (admittedly, the league has only operated playoffs in those two previous campaigns). The Dragons, by contrast, were new to the league and new to the unique pressures of post season. The risk of big-game nerves was perhaps the most significant factor against Brian Idalski’s girls ahead of the face-off in Bashkortostan.

However, there was little sign of any anxiety. Neither the occasion, nor the formidable record of our opponent in regular season disquieted the Rays. From the first moments, the team put the pressure on Anna Prugova’s net and the goalie – the top performer in the league thus far – was beaten in the sixth minute when Wong took matters into her own hands, surging down the ice, evading the attentions of Batalova and sliding the puck through Prugova’s five-hole. Agidel looked to hit back, but KRS absorbed the pressure and finished the opening frame strongly to defend that one-goal lead.

At the intermission, Megan Bozek talked of the team’s determination to start each period strongly and that certainly carried into the second stanza. The Rays came out and pressed Agidel hard once again, twice earning power plays. The second was converted by Llanes, snaffling the rebound after Bozek and Carpenter fired in shots that stretched Prugova to breaking point. Midway through the game it was 3-0: Agidel squandered a good chance at one end, Carpenter took play to the other and set up Bozek for a third goal.

The home team responded with a power play goal of its own from Veronika Korzhakova, World Junior bronze medallist earlier this year, but was unable to close the gap further in the third period. KRS even killed a 3-on-5 situation late in the game to complete a solid 3-1 verdict.

Jessica Wong, scorer of our opening goal, told the WHL website: “I think we did well if you look at the game as a whole. We were ready for this. Sure, there were a few shifts that didn’t quite go our way but overall the game was great. Scoring the first goal in the final obviously means a lot to me and to the team. It gave us all confidence – we’re a team and we’re working together for one result.”

Game two of the series takes place on Sunday, with the face-off at 1230 local time. A second win for the Rays would give the team a chance to wrap it all up in game three on Wednesday.